A growing number of new Canadians are enrolling their children in French immersion schools in Manitoba, contributing to an enrolment spike at the bilingual schools. 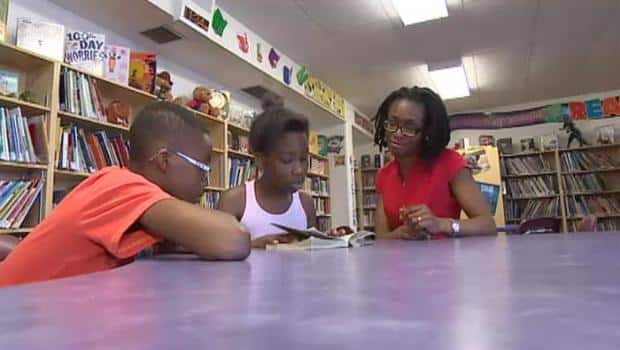 8 years agoVideo
1:37
A growing number of newcomers to Canada are enrolling their children in French immersion schools in Manitoba, contributing to an enrollment spike at the bilingual schools. CBC's Jillian Taylor reports. 1:37

A growing number of newcomers to Canada are enrolling their children in French immersion schools in Manitoba, contributing to an enrolment spike at the bilingual schools.

In many cases, the children of immigrant families are learning English and French as their second and third languages at the French immersion schools.

Anna Chepurna, who moved with her family from Russia to Winnipeg six years ago, said she enrolled her daughter, Arina Sherstyuk, in École St Avila in Fort Richmond.

"The more languages the child will speak, the better, more brighter and prominent his future will be," Chepurna said.

Chepurna said Arina, who is now a 10-year-old Grade 5 student, has learned French and English at the same time without falling behind.

"She would feel the same as other kids because other kids came from English-speaking or other-language-speaking families," she said.

St. Avila principal Gordon Campbell says a growing number of immigrant families are choosing to have their children educated in French.

"Compared to 10 years ago, where we maybe … 10 per cent of our families were immigrant families, now it's a third or a little bit more than that," he said.

Enrolment in French immersion in Manitoba has grown over the last five school years.

The provincial Education Department says it does not have data regarding immigrant or refugee children enrolled in French immersion programs.

Officials say they expect French immersion enrolment to continue growing slowly in the coming years, assuming immigration levels stay the same and families remain interested in having their children learn more than one language.