Some newcomers who play soccer in Winnipeg are facing an ultimatum as the outdoor season approaches — pay up or risk being cut from their team.

Team sports provide newcomers with a sense of belonging and community

When Anthony Chance came to Winnipeg as a refugee from Rwanda in 2010, he and his friends made a point of not getting involved with the wrong crowd, so they turned to soccer. Now he's worried other people won't get the same chance.

"The team has kept me busy, from getting in trouble. That's the biggest thing," Chance said before a recent game. He plays defence on the Wasps FC team in the Manitoba Major Soccer League.

Several players on his team face getting cut if they don't come up with about $250 each to cover their portion of the team's league fees — a big cost to many who are already struggling to get by on fixed incomes.

Chance, now 23, points to people at his former inner-city high school, who arrived as refugees and are now in jail or have joined gangs, as proof of what the team is doing to keep guys out of trouble.

His team is made up of past and present refugees and newcomers who have fled conflict in places like Rwanda. It's the brainchild of Jean-Baptiste Ajua, who came to Canada as a refugee and drowned at a Manitoba beach in 2016.

"This team, it's like a family, when they have a problem there's always somebody there for you, no matter what," Chance said.

There is concern that there won't be enough players left to stay in the league if the guys don't come up with the cash soon.

"It's hard to accept it," said Theophile Tuyisingize, a defender on the team, who is working but still having a hard time coming up with the cash. He said many of the guys on the team are working but only making minimum wage, which makes it hard to cover the basics like rent.

The players on the Wasps aren't the only newcomers with a love of soccer who are struggling this season.

Omar Rahimi coaches Liberty FC and said the team, like the Wasps, is short about $5,000 this season.

"These kids come to our country, they have big big passion for soccer and it's very sad to see them sitting on the sidelines," Rahimi said.

Some of the players on the Liberty FC work for Rahimi, who runs a small business that does everything from building projects and repairs to snow shovelling and garbage removal, but even with the cash they earn, it's not enough for most to play.

It's disheartening for Rahimi to see. He came to Canada in 2001 from Iraq as a refugee and for him too, soccer was a way to stay out of trouble. Going on to recruit refugees to play on an elite team was a dream he's now fulfilling through Liberty.

"Most of my team don't have parents. They're alone here. They can barely afford to get by. They don't have cars."

Rahimi would like to set up a fundraiser to raise money for the team but still has to secure a soccer venue before he can go forward.

Mohammad Alhmeiat, who works for Rahimi and is a goalie on the team, came to Winnipeg as a refugee from Syria two years ago. While he's working, he still can't afford the league fees — something Rahimi is taking care of for him for now.

"I like soccer because I'm playing with my friend," Alhmeiat, who is still learning English, said. 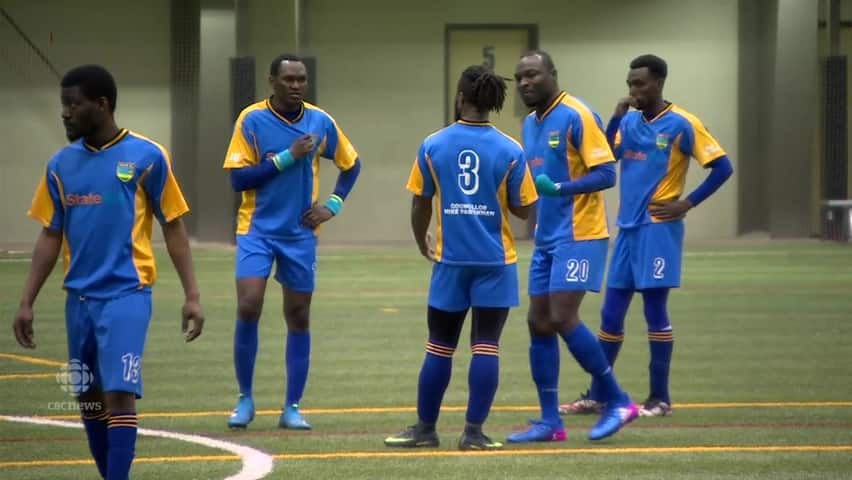 3 years ago
1:38
Some players on a Winnipeg soccer team are worried their team will fold if they don't come up with some cash soon. 1:38

The Manitoba Major Soccer League is aware of the financial difficulties the two teams are facing and has now extended the deadline into April for fees to be paid.

"We understand that there's a certain cost to play in our league and those fees go to cover things like our referees, our field costs, which we have the best fields in the league but they're costly," said Raffaele Richichi, a board member with the league.