A dozen toy tractors line the shelves, along with donated books and bins full of Mr. Potato Heads. 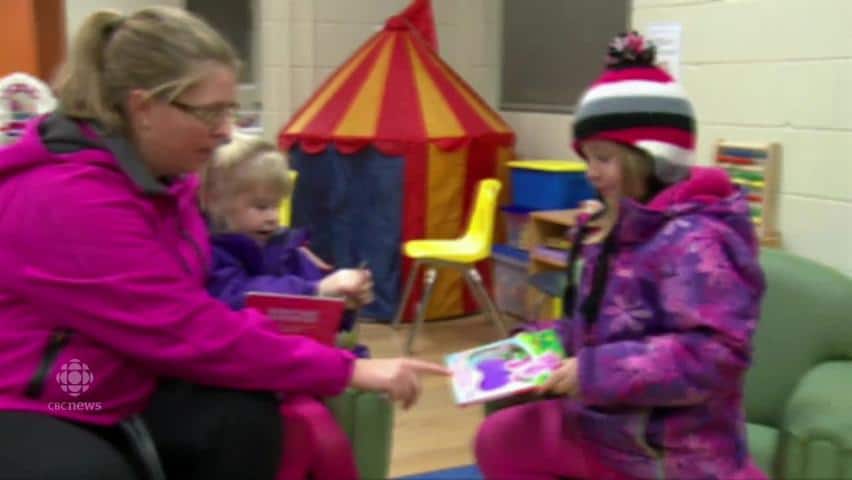 6 years agoVideo
1:48
A dozen toy tractors line the shelves, along with donated books and bins full of Mr. Potato Heads. 1:48

A dozen toy tractors line the shelves, along with donated books and bins full of Mr. Potato Heads.

"It's really exciting. It's been a long road," Guthrie told CBC News.

A milestone, three years in the making.

Before this space, finding child care in the municipality has been virtually impossible.

There are no licensed facilities in the Rural Municipality of Pipestone.

The closest one is in a town 30 minutes away.

According to the province's child care data base, there are no vacancies at child care facilities in western Manitoba, leaving some parents like Guthrie crossing the border into Saskatchewan.

Others have been calling in sick or have had to quit their jobs to look after their children.

"It has been extremely difficult I have been having to get my mother who lives five hours away to come sometimes - for months - to help me out," Charlene Campbell said. The mother of three said she's not been able to return to full-time work after having kids and even part-time work is sometimes unmanageable.

"Sometimes it was so stressful that you just wanted to give up, and it's just not worth it to go to work because you're worrying who's watching your kids."

"[This daycare] going to be a huge stress reliever," Campbell said.

Mother of two Carrie Denbow showed up to the New Reston Early Learning Centre to register her daughters.

She and her husband have had to reduce work hours and change positions at their jobs to make it work.

"It's been very difficult. I've been looking for somebody ever since I had Chloe and she's going to be seven," she said.

The centre will be a gift for parents like Denbow and Campbell, but the battle now becomes securing a spot.

Guthrie, president of the Reston Early Learning Centre, said the demand far exceeds what they were able to build.

The daycare can currently take 20 children and four infants. They have the capacity to expand, but not the staff or any provincial funding.

The project has been been funded by the municipality and local business, and Guthrie said it's a huge step in the right direction.

The Reston Early Learning Centre is awaiting a provincial inspection before it opens its doors, likely in early November.