Nesbitt boasts a paved Main Street fronting a cluster of homes on a few dirt roads — but every Wednesday night, hundreds of kids and their parents visit the tiny Manitoba farming community to play soccer.

Volunteers cook food in local hall for families, community members who come out for soccer in Nesbitt, Man.

It's a tiny community with about a dozen homes, but every Wednesday in the spring, soccer brings hundreds of kids and their parents to Nesbitt, Man.

Nestled next to Manitoba's two-lane Highway 2, about 30 kilometres south of Brandon, Nesbitt is like many other farming communities — sleepy, quiet places where usually not much happens. But the Wednesday soccer games have broken that trend.

Volunteers coach the kids while others cook food in the community hall. The kids play soccer on a bare grass field on the edge of town, next to a farmer's field. From Nesbitt's Main Street, the sound of laughing, screaming kids can be heard in the distance.

"It's so nice to see the community," Michelle Sowiak, a community member who helps feed the onslaught, said in between what she described as the first and second nightly waves of people to pass through the hall.

Sowiak doesn't even have kids in the "Kidz Kicks" soccer program, but she and a small group of dedicated volunteers spend their Wednesday afternoons cooking and preparing the evening supper for the crowd.

Sowiak said six or seven volunteers prepare around 80 supper specials per night, on top of the hamburgers, hot dogs, lasagna and other fare sold out of the hall. Last week, the volunteers cooked a very popular Ukrainian supper.

The food and fun don't attract just soccer players and their families anymore — local seniors come out to watch the kids, lawn chairs in tow, and farmers stop their tractors.

"They come and have supper," Sowiak said, adding that the money raised goes toward the hall's upkeep. "It's a good community venture."

Soccer night in Nesbitt began with a group of local families getting together so their kids could play soccer.

Janna Mushie actually started the rural soccer program in 2013 in the nearby village of Carroll, Man. It's now in its third year in Nesbitt and more than 100 kids, from small toddlers to 12-year-olds, are enrolled.

Efforts have been made to keep costs low for participants.

A supply of equipment has been built up over the years, including some donated by sponsors, and the nets were welded and painted by volunteers, Mushie said.

"It's a great time to get your kids out," said Scott Elder, from Wawanesa, Man. His daughter is in the program and he helped coach a team last year.

He's not surprised to see more and more kids coming out from the rural area.

"They can go run around, go get some starch out of them before bedtime," he said, adding that many of the kids go to area schools together.

It's that sense of community that keeps bringing people out.

"When you walk out and you see the little children out on the field ... it's a feel-good moment that we can still do this," said Sowiak.

"In reality, we're all just one community," said Elder, who plans to keep coming to Nesbitt's soccer nights as long as his daughter wants to play. "It's fantastic.… It's absolutely fantastic." 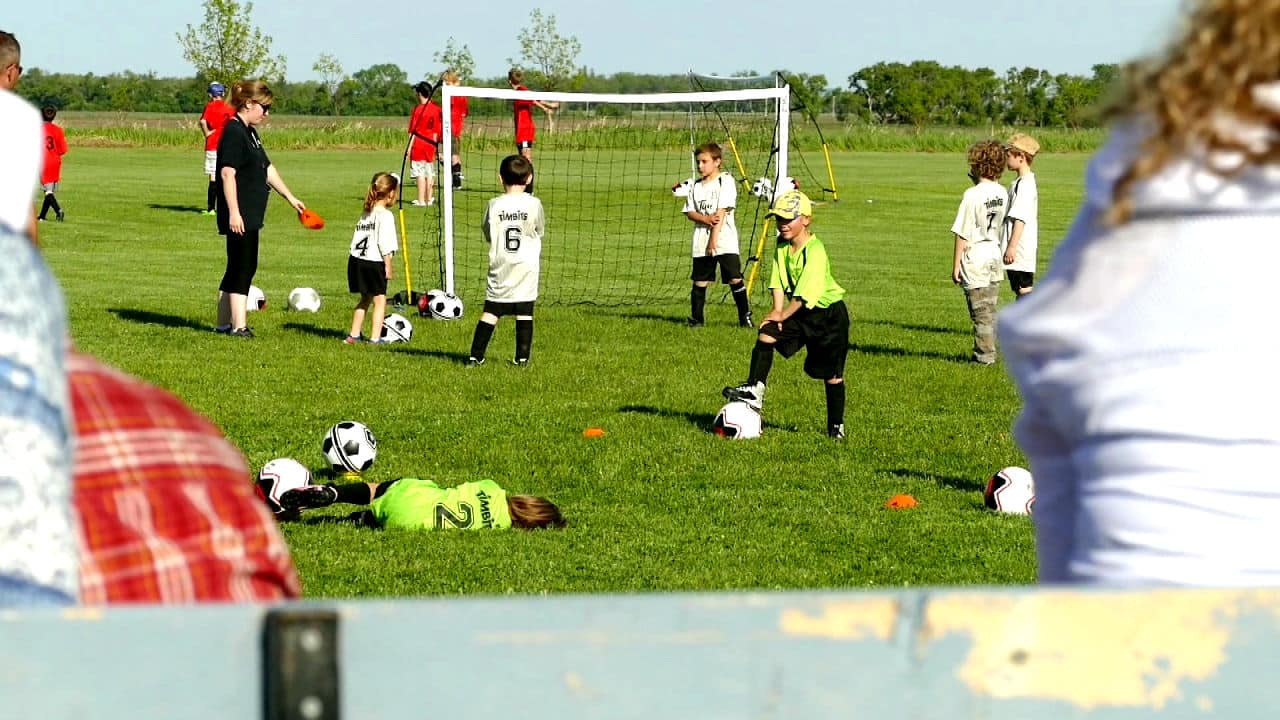 Community comes together for soccer games in Nesbitt

4 years ago
1:43
It's a tiny community with about a dozen homes, but every Wednesday in the spring, soccer brings hundreds of kids and their parents to Nesbitt, Man. 1:43
CBC's Journalistic Standards and Practices|About CBC News