NDP Leader Jagmeet Singh shook hands and posed for selfies while rapidly summarizing his party's commitment to climate action during a quick campaign stop at The Forks in Winnipeg Tuesday.

NDP Leader Jagmeet Singh shook hands and posed for selfies as he rapidly summarized his party's commitment to climate action during a quick stop at The Forks in Winnipeg Tuesday.

Before visiting the national historic site, Singh's first stop of the day was at the University of Winnipeg, where he announced major investments on environmental initiatives while flanked by supporters and NDP members of the Manitoba legislative assembly.

A federal NDP government would tackle climate change through the creation of 300,000 green jobs, end subsidies for the fossil fuel industry and create a publicly funded $15-billion "climate bank" to bolster emission-reductions measures, Singh told the crowd at the U of W.

He took swipes at his competitors and echoed elements of teen activist Greta Thunberg's impassioned speech at the United Nations Climate Action Summit on Monday.

"This is a crisis of epic proportion," said Singh, accusing Liberal Leader Justin Trudeau of "empty promises" and characterizing Conservative Leader Andrew Scheer as someone who "barely believes that there is a climate crisis."

"Future generations of kids are depending on us. They are begging for action and we are going to deliver that. We have the courage to do so."

The NDP would ensure First Nations are "equal partners" in the fight against climate change, Singh said. Resolving boil-water advisories on First Nations, fixing inadequate housing and improving access to education are part of that, he said.

If voters elect an NDP government, Singh said, the publicly funded climate bank would help businesses green up operations and facilitate the development of an emissions-free energy corridor from coast to coast.

He cited Winnipeg-based bus manufacturer New Flyer Industries as an example of a business that could benefit from $3 billion the NDP would earmark for electrifying all public transit by 2030.

Singh also emphasized the importance of working directly with municipalities, particularly in a province like Manitoba, where he said the Progressive Conservative provincial government is focused on cuts to services such as transit.

"More than ever cities need a partner federally who's willing to invest in cities and invest in the things that people need," he said.

"We are going to work with the provinces to make sure that the funds are available, but it's going to be a massive investment."

The Liberals announced a plan of their own Tuesday to get Canada to net-zero emissions by 2050.

While making rounds at The Forks Market, Singh spoke with Tabitha Langen, who has owned and operated the Tall Grass Prairie bakery for almost 30 years. She said her business was founded in response to environmental concerns and only sources grains from organic local farms.

Singh's message about cutting out fossil fuels resonated with her.

Her first impression of Singh is that he is "leadership material" and she hopes he "hangs in there."

"I would love to see the NDP and the Green Party work together a lot more. Then I think they would really have a good chance," she said.

"It's always hard for the left, and I get that — we're protesters. So I don't know what the prospects are [this election]. My fear is splitting the vote."

U of W student Viswanath Dash — a newcomer to Canada originally from India — managed to snag a selfie with Singh at The Forks.

He can't vote in the coming election, though he may be able to vote for Singh one day.

Canadians head to the polls on Oct. 21. 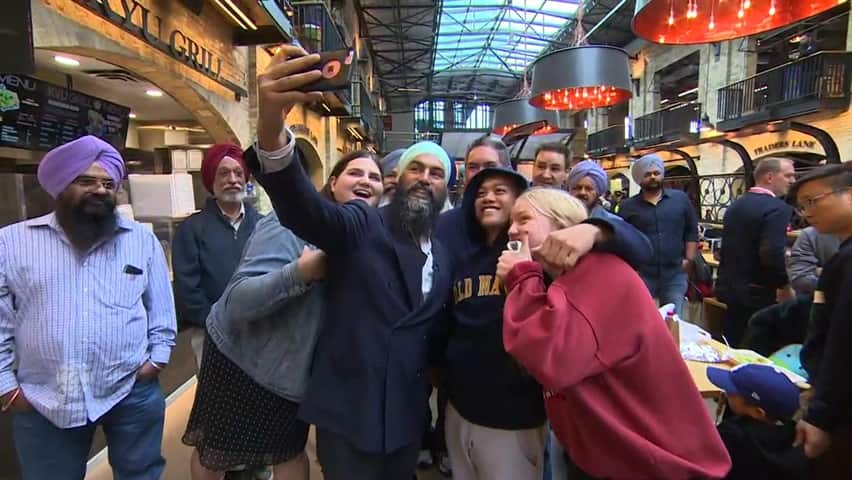 'Future generations of kids are depending on us': Federal NDP leader makes climate action promises in Winnipeg