National Aboriginal Day celebrates 'beautiful culture,' should be day off, some say

Tuesday, one day after the summer solstice and one of the longest days of the year, had many people at this year's National Aboriginal Day celebrations in Winnipeg wondering if the day should be a national holiday. 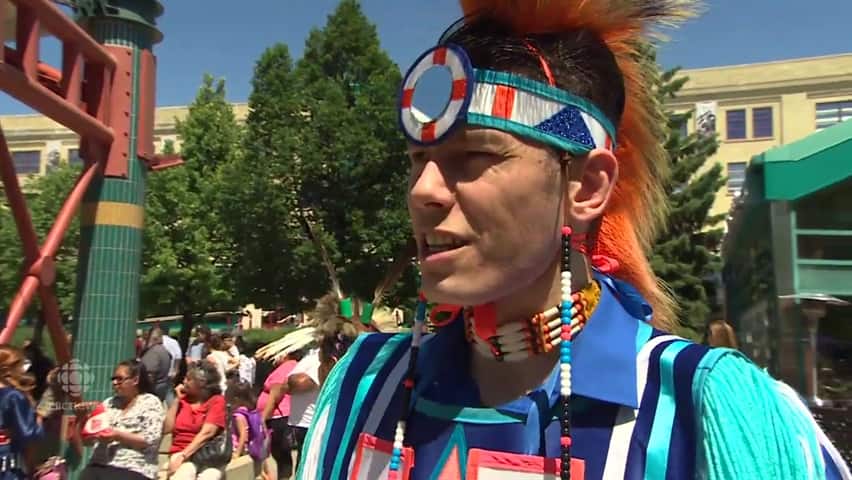 National Aboriginal Day celebrates 'beautiful culture', should be day off, some say

5 years ago
2:07
Tuesday is the summer solstice and on the longest day of the year, many people in at this year's celebrations in Winnipeg for National Aboriginal Day are wondering if the day should be a national holiday. 2:07

Tuesday, one day after the summer solstice and one of the longest days of the year, had many people at this year's National Aboriginal Day celebrations in Winnipeg wondering if the day should be a national holiday.

Ray Stevenson was drumming and signing at the City Hall celebration this morning, then made his way to The Forks to drum for the Founding Nations Pow Wow. As a huge crowd gathered under the main canopy, Stevenson said festivities like today acknowledge and celebrate Aboriginal people. He said that's good, but it should be recognized like other statutory holidays with a day off for everyone.

"Historically we were the first people of Turtle Island. We should be acknowledged, possibly celebrated for that. There's a lot of different holidays out there for a lot of different people. So why wouldn't there be [a national holiday for Aboriginal Day]? I think there should be," said Stevenson.

Adam Hnybida, who works at the Boys and Girls Club in Point Douglas and went to the event at The Forks to dance, agrees.

"I think it should be celebrated. It's a beautiful culture," he said. Hnybida, who wore custom regalia for the day, spent a lot of time having his picture taken with tourists and visitors. He said it's an opportunity to bridge the culture gap.

"It's a good time for everyone to connect and become one large community," said Hnybida.

Earlier in the day the City of Winnipeg erected a tipi in its courtyard and showcased Aboriginal art, dance, and music.

Mayor Brian Bowman along with elder Carolyn Moar planted sage and cedar plants, which are used in traditional medicine wheels, in the east garden.
Bowman, who declared 2016 the year of reconciliation after Winnipeg was dubbed the most racist city in Canada by Maclean's magazine, says the city has made strides in the past six months.

"We're not going to finish all our work this year, but what we are trying to do is ... change the tone of the discussion. We're trying to encourage bridge-building within our community."

Bowman wasn't sure if the Truth and Reconciliation Commission's recommendation to have a national holiday to honour the lives lost and those affected by the legacy of residential schools is something that should coincide with National Aboriginal Day.

Hnybida explained his feelings on that question.

"Reconciliation is kind of a dark spot, and this is kind of more celebrating our culture. To link that to our culture is a bit tough," said Hnybida.

Hnybida says in the meantime, he'll keep dancing and showcasing his culture.

"Just to spread good medicine, to spread the word."