CBC Manitoba reporter Bartley Kives recounts a week on northern Quebec's Nastapoka River, which he found both beautiful and frightening.

For the first 97 kilometres of the Nastapoka River, high water has been our friend.

Heavy rains over the summer have submerged rock gardens and increased the flow of this pristine river in northern Quebec's Tursujuq National Park, a relatively new protected area that covers a large swath of traditional Inuit and Cree territory on the east side of Hudson Bay.

For two days, fellow Winnipegger Chris Debicki and I have been making fantastic time on the Nastapoka, averaging about 48 kilometres a day as we paddled through a spectacular sub-Arctic landscape dominated by some of the oldest rocks in the world, the sandy remains of glaciers and a river that slices through these hills and eskers like a snake on a mission to reach the sea.

Our luck, however, is about to change. The Nastapoka, which flows west off the gneiss highlands of Nunavik and into Hudson Bay, loses most of its elevation in its final 55 kilometres. The first 100 clicks west of Lac des Loups Marins — that's "Lake of the Sea Wolves" — are relatively placid.

But now we've approached a 500-metre-long river valley with three large drops. High water has submerged the rocks along the sides, so we're forced to clamber up the hill at the right side of the river to get a look at what's ahead.

The first drop clearly is an easy sort of Class IV rapid. If we line up the canoe at the the correct angle, it's a straight shot through a big wave we know we can handle, thanks to the spray deck on our boat.

The second drop appears to be similar at this distance. We can't even see the third, but there is plenty of time to eddy out, or pull to the side of the river, before we have to worry about it.

"We can do this," Chris says, convincingly. "It's going to be great."

Back in the canoe, we paddle upstream to ensure we take the right angle. We slice through the first rapid without issue, though I almost lose my paddle in the spray.

As we move along the aerated water below the first drop, the next one comes closer into view. Or at least it should have, if it was in fact a rapid. It's actually a ledge, a shelf-like river feature that's shorter, with a more abrupt drop.

At the lip of the ledge, I realize we're screwed. We fall into a trough and get tossed sideways, like a bath toy, by a wave of white froth. I'm in the river before I have the sense to rip the Velcro attaching me to the spray deck.

I have the strange sensation of not knowing which way is up or down. I feel like I'm floating in something that is neither air nor water. After what feels like an eternity — perhaps three seconds, according to video footage from the camera mounted to Chris' helmet — I'm floating on the surface of the river again.

Chris has the canoe by a throwbag rope. I believe I've lost my paddle, but it somehow jammed itself into the bow cockpit. We look back at the second rapid and realize it wasn't runnable, at least not with our skillset, in a fully-laden touring canoe.

"Class V ledge," says the notation on the map.

Never before have I done such a terrible a job of scouting a rapid. That said, never before have I been as lucky not to suffer any serious consequences of a stupid mistake, especially in a remote location on a single-canoe trip.

That afternoon, the Nastapoka River suddenly seemed a lot more formidable. It would become even more awe-inspiring and terrifying over the remaining days of our trip.

The sea wolves are real

For most of 2016, I thought I was going to paddle the Seal River, which runs through Dene country across northern Manitoba, roughly parallel to the Nunavut border, before it empties into the west side Hudson Bay, not far from Churchill.

Chris had other ideas — and eyes on the east side of the bay. He started talking up the Nastapoka and Tursujuq National Park, which had only come into existence in 2012.

There are massive waterfalls along this river, he said. And a rare freshwater population of harbour seals, the "sea wolves" that lent their name to Lac de Loups Marins.

I was skeptical. No one else had paddled the Nastapoka this summer, to my knowledge. Only large groups had traversed the river the previous season. A trip involving a single canoe, I thought, may be foolhardy, even for a pair of relatively seasoned wilderness-recreation geeks equipped with a satphone and a GPS messenger.

So I dug in my heels and found myself, my canoe and my gear on a floatplane in the middle of August flying out of the Hudson Bay village of Kuujjuarapik and into the wilderness of Nunavik, the semi-autonomous northern section of Quebec.

We flew above a Tolkien-esque landscape of coastal cliffs, tree-less tundra and countless bodies of water, including two unlikely conjoined circles known as Clearwater Lake, which was created by meteor strikes that took place 465 and 287 million years ago.

We paddled away from the floatplane on a sunny afternoon at the western edge of Lac des Loups Marins. It took precisely two hours to see our first "sea wolf."

As we sat on a beach campsite and ate our dinner, a solitary harbour seal swam back and forth, occasionally craning its neck to get a better view of its unusual visitors.

Seals don't swim to Lac des Loups Marins from Hudson Bay. That journey would involve 200 kilometres and several impassable obstacles, including a series of towering waterfalls.

Biologists believe the seals wound up so far inland after the glaciers receded from Quebec and the ancient Tyrell Sea covered the western edge of the province. The marine mammals then got stranded inland when the sea receded and the land rebounded from the weight of the glaciers.

There are only a few hundred of the creatures today. We managed to spot a total of three along the length of the river, including one inhabiting a short stretch of river between two waterfalls.

Over the course of six days, we also saw a genuine loup: one large white timber wolf followed our canoe's progress from a safe perch atop an esker. We also spotted three black bears, the prints of countless others and the tracks of musk-ox, a species successfully introduced to Nunavik.

The river was also lined with hundreds of caribou antlers, left behind from the herds that migrate across this territory in the colder months. Both the Cree and the Inuit retain the right to hunt within Tursujuq National Park, which was created to both protect the land and sustain traditional ways of living.

Most of the recreational paddling in Tursujuq is concentrated in and around Richmond Gulf, a brackish body of water known to the Inuit as Tasiujaq. Park officials are working with the Inuit in the village of Umiujaq to develop guided flatwater tours and ensure tourist dollars are spent locally.

The Nastapoka is far less serene. The morning after our misadventure in the triple rapid, we took another spill in a chute that started with a long tongue of easy ripples and turned into a bucking bronco of Class IV waves.

"That was still easier than portaging," quipped Chris after another self-rescue.

Here there be monsters

As we paddled toward Hudson bay, the rapids arrived more frequently and grew larger by volume. We were soon lining the canoe around the edges of most of them or shoving it through the bush when even lining proved too dangerous.

The compulsory portages on the Nastapoka are obvious. There is no choice but to carry around nine sets of falls, most notably towering Twin Falls, which would be one of Quebec's most popular natural attractions if it wasn't so difficult to reach.

Nastapoka Falls, near the end of the river, also tumbles 35 metres to sea level at Hudson Bay. But the most terrifying water feature is an unnamed waterfall that ends in a standing wave as wide as a stripmall. Late one evening, as we're forced to camp beside it, Chris wondered aloud about the prospect of some tyrant tossing people into this monster, just to see if they survive. 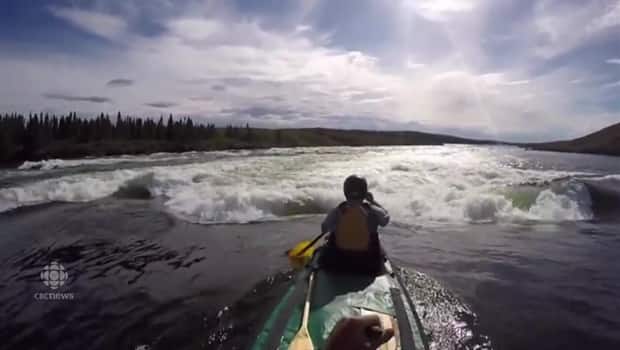 Both Twin Falls and Nastapoka Falls occupy a 15-kilometre stretch of river which is essentially one long gorge. We dumped the canoe for the third and final time around a bend in this valley and wound up going for a two-kilometre swim in Class I waves.

At this point, the weather is cold but neoprene wetsuits kept us safe from hypothermia. We warmed up on the final portage around Nastapoka Falls and camped for the night at the edge of Hudson Bay, inside an Inuit cabin that's been torn apart by bears.

The size of the claw marks suggest the work of black bears; polar bears are uncommon on this side of Hudson Bay. We slept on old mattresses, surrounded by torn up fibreglass insulation. It felt like luxury, as we were protected from the rain.

Chris wanted to paddle 40 kilometres down the Hudson Bay coast to Umiujaq, but the weather was getting worse and I had no desire to test the open water, even in a decked canoe.

"It's going to be great," he said, knowing damn well I'm not on board this time.

"Don't you ever say that to me again," I responded.

Our salvation arrived in the form of Umiujaq outfitter Lucassie Tooktoo, who braved foul weather to pick us up in a motorized freighter canoe. I kept my head down for almost three hours as the boat skips over the heavy chop of Hudson Bay.

"Whoa. Those are big waves," said Tooktoo, which was terrifying considering the Inuit tendency to understate practically everything.

There is nothing subtle about the Nastapoka River. It's more diverse than any river I've ever seen, in terms of scenery. It's just as beautiful as any backdrop for Lord Of The Rings. It's also frightening in high water, which isn't always a friend.