The new owner of Movie Village, Greg Tonn, says regrettably, he will not be swooping in to save the former landmark in Osborne Village.

Once a hub for the Winnipeg's film community, new owner is selling off all remaining stock

The new owner of Movie Village, Greg Tonn, says regrettably, he will not be swooping in to save the former landmark in Osborne Village.

Over the next week, Tonn, the long-time owner of Into the Music, is selling off all remaining titles at the former Movie Village/Music Trader location on Osborne Street.

"I feel more than a twinge of guilt about being the guy with the black hat riding in," he says. "It's just no longer a viable business." 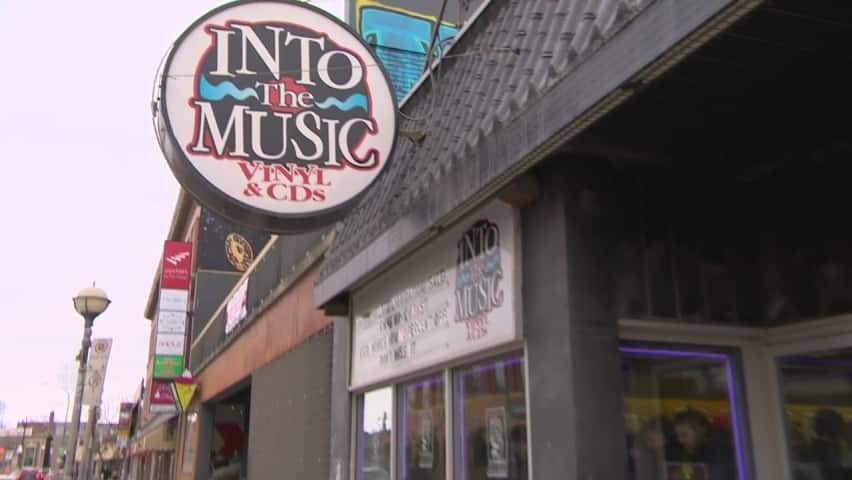 3 years agoVideo
1:38
The new owner of Movie Village, Greg Tonn, says regrettably, he will not be swooping in to save the former landmark in Osborne Village. 1:38

At its peak, Movie Village had rows and rows of obscure, arty films next to the big, summer blockbusters. Chances are if you lived in Winnipeg in the 1990s, you handled a VHS or two with the iconic a yellow and black Movie Village stamp.

Greg Klymkiw, executive director of the Winnipeg Film Group, remembers Movie Village as one of the best sores of its kind in Canada.

"Its original owner, David Ringer, was a real visionary. He was amazing," says Klymkiw.

On Saturday, Klymkiw stopped by the liquidation sale, where the movies are all 70 per cent off. He purchased a copy of The Garden of Allah on DVD for about $7. The 1939 film was one of the first Technicolor films ever made.

"There is a lot to be said for that tangibility of flipping through the racks and just finding that perfect thing," he says standing near the store's dwindling Blu-Ray collection. "I'm a little sad to see they aren't sticking with the movies."

Tonn says he was in awe of Movie Village when it was in it's glory days and still open at the bigger location where a Shoppers Drug Mart now stands. Both Into the Music and Movie Village started up around the same time, about 30 years ago.

It was an internal battle to finally decide to close Movie Village, he says. Revenues from rentals, which had always been essential the the business's profit margin, have declined 15 per cent every year, for the past three years, he said.

"That's the cold reality of the marketplace," he says. "I'm not doing this for nostalgia, I'm not the white knight riding in on a horse."

Streaming services like Netflix, Crave and iTunes have all but decimated the traditional rental business, but Tonn continues to bet on a sustainable market for music.

He plans to use the space once taken up by copies of DVDs and Blu-Rays to sell vinyl records, CDs and stereo equipment.

After March 31, any remaining movies left move into storage and will be sold online.