A University of Manitoba professor who wanted a meeting with the editor of the Morris Mirror newspaper got the cold shoulder today. 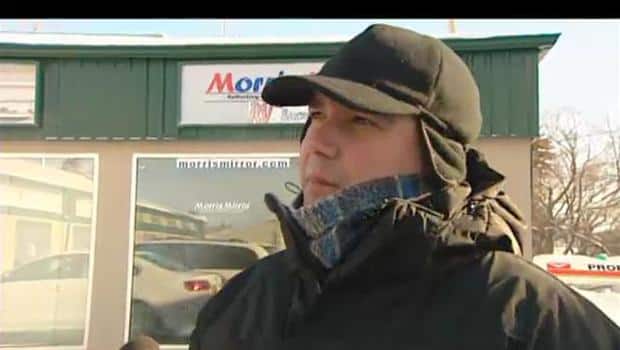 8 years agoVideo
1:48
University of Manitoba native studies lecturer tries unsuccessfully to meet with editor of Morris Mirror newspaper over derogatory comments that were made about aboriginal people in a recent editorial. 1:48

A University of Manitoba professor who wanted a meeting with the editor of the Morris Mirror got the cold shoulder today.

Niigaan Sinclair, a lecturer with the university's native studies department, travelled from Winnipeg to Morris, Man., on Tuesday to seek a face-to-face chat about aboriginal relationships with Mirror editor-in-chief Reed Turcotte.

Last week, Turcotte published comments that labelled some aboriginal people as terrorists and called them lazy and corrupt.

In the one-paragraph comment, Turcotte gave a "thumbs down" to the Idle No More movement and wrote that some aboriginals "are demanding unrealistic expectations of the government and … in some cases, natives are acting like terrorists in their own country. Indians/natives want it all but corruption and laziness prevent some of them from working for it."

When it sparked an uproar among some people, including Morris Mayor Gavin van der Linde, Turcotte published a special edition with an apology, but he also noted that many people shared his point of view.

Sinclair sent Turcotte an email requesting a meeting — even offering to bring coffee — so they could have a respectful discussion of the issues related to aboriginal people and the Idle No More movement.

But according to Sinclair, Turcotte indicated that he didn't want to talk until some of the "rhetoric" surrounding the Mirror comments died down.

Insistent, Sinclair made the 55-kilometre trip anyway. When he showed up, the door to the Mirror office was locked and the lights were out. He waited for a few hours, but Turcotte never showed up.

Sinclair said the treaties between Canada and First Nations were signed in a spirit of respect and working together and he hoped to take that message to Turcotte.

Instead, Sinclair taped a letter to the door of the office in hopes it will be printed in a future edition of the paper.

"He's indicated that he's not ready to have this dialogue. I am. I'm ready for this," Sinclair said.