A new monument now marks the spot where striking workers pushed a streetcar off its tracks and lit it on fire — igniting a chain of events that would lead to the bloody end of the 1919 Winnipeg General Strike — exactly a century after the climactic events took place.

'It just felt like it has always been there,' says artist who helped create it

A new monument now marks the spot where striking workers pushed a streetcar off its tracks and lit it on fire — igniting a chain of events that would lead to the bloody end of the 1919 Winnipeg General Strike — exactly a century after the climactic events took place.

The new public artwork was officially unveiled with a blast of fireworks Friday night in front of the Pantages Theatre Plaza at the corner of Market Avenue and Main Street.

Named after the notorious moniker given to the violent day the strike ended, Bloody Saturday features a steel streetcar sunken into the ground at a 20-degree angle that lights up from the inside at night, commemorating the tipped streetcar and the lives lost in the resulting riot.

"When the thing was finally dropped in here, it just felt like it has always been there," says Noam Gonick, who created the piece with the late artist Bernie Miller.

"It's always been there in our minds and in our psyches — anyone who's lived here for the last 100 years, we all know that this was the most amazing thing that happened and now there's a symbol for that."

Gonick, who is primarily a filmmaker, began the streetcar sculpture as a collaborative project with sculptor Miller. In the fall of 2017, shortly after they completed the design and were ready to work with the steel fabricators, Miller died suddenly at the age of 69.

Built from steel and glass, the monument looks like a ghost of the original trolley car, rising from pavement in a way hauntingly similar to the famous photo by prolific local photographer, L.B. Foote.

That photo was taken June 21, 1919, steps from where the sculpture now stands.

Strikers and supporters had gathered in front of city hall to protest the arrests of several strike leaders that day when a streetcar approached.

The car was being run by replacement workers, which the crowd took as an inflammatory attempt to break the strike.

They surrounded it, rocked it from side to side, and pushed it off the tracks but were unable to tip it over entirely. They then smashed the windows, climbed inside, slashed the seats and set it on fire.

As smoke billowed from it, the North West Mounted Police, along with special constables hired by the city, moved in on foot and horseback. A violent clash ensued with two people killed by police bullets and many others beaten. 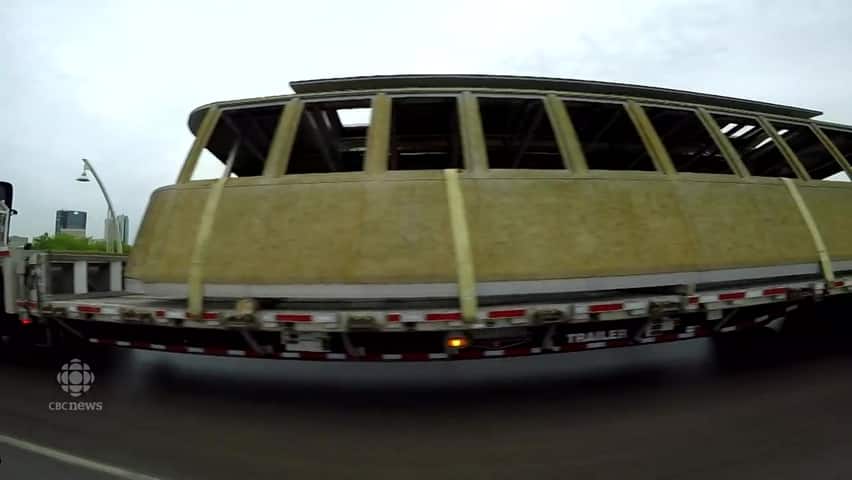 2 years ago
1:52
One of the most iconic images from the 1919 Winnipeg General Strike has been resurrected. 1:52

Gonick says he and Miller wanted the monument to capture the rebellious spirit of the strike, something he says he can still feel in the city today.

"It's in all of our blood — this is the spirit, the rebellious fervour that is Winnipeg — it really expressed itself so much in 1919," he said.

"There's just a certain kind of rebelliousness about this place … and every so often it rears its ugly face — but I think the face is really quite beautiful and we wanted to give that a form."

Winnipeg mayor Brian Bowman spoke at the unveiling, telling the gathered crowd he had a front row seat to watch the structure being installed from his window at city call.

"You'll be pleased to know that you can see it very clearly, from the office of the mayor," he said of the sculpture.

"So not just this mayor, but every mayor going forward will be reminded of the general strike."

With files from Darren Bernhardt