'I don't know nearly enough of who I am': Daughter of murdered parents testifies at MMIWG hearings

During the third day of its stop in Winnipeg, the National Inquiry on Missing and Murdered Indigenous Women and Girls heard from three families who rarely share their stories of loss.

It's been more than 24 years since a murder-suicide shocked the ​Métis community of St. Eustache, Man. On Wednesday, the only daughter of the couple murdered that January 1993 night testified at the National Inquiry into Missing and Murdered Indigenous Women and Girls about her parents' deaths.

Fallon Farinacci's parents, Sherry and Maurice Paul, were killed by Andre Ducharme, who then killed himself.

On Wednesday, she told the inquiry how much she's missed out on because of the murder of her parents.

"I don't know nearly enough of who I am and it shows," she said.

Farinacci, who was nine years old at the time, was in the home on the night her mother and father were shot and killed by Ducharme, her mother's stalker. She said her mother was allowed to write a will in the hours before she was murdered.

Following the murder of her parents, Farinacci went to live in Ontario with family, while her two brothers stayed in Manitoba.

Her eldest brother, 17 at the time, was tied up at gunpoint the night her parents were killed. He escaped but Farinacci says he was never free from the trauma.

"He passed away in 2004. He committed suicide," she said during her testimony. She says the murder of their parents led to her brother's death.

Farinacci said she also lost out on growing up with the ​Mé​tis culture of her father's family.

"Something like this [inquiry] means so much to me because I get to learn more and more about what I've missed out on," she said.

The inquiry also heard Wednesday from the family of Kimberly Clarke, who was murdered under Winnipeg's Redwood Bridge in 1998.

Her sister Darlene Clarke and three nieces spoke on her behalf.

"This is not an easy task for me as I have experienced hell on earth," said Darlene.

Kimberly was 36 when she was killed. She was a mother and a loving aunt to Darlene's daughters, the inquiry heard.

"That's something that I know that the attacker can never take away from me is that love I experienced," said Courtney Bear, one of Kimberly's nieces.

Bear testified that her aunt's murder left a ripple effect on her whole family through alcoholism, drug addiction, incarceration and mental illness.

The family testified that they received no support or counselling to deal with their trauma.

"Where is the justice for us?" asked Bear. "Where was our healing when we needed people to support us as a family unit, when we couldn't be there for each other?"

Clarke said what makes the pain worse is knowing her sister's killer was given help.

"While incarcerated, he has received his education, job skills. How nice," she read from a statement. "How do you rehabilitate someone who is evil, sadistic and shows no remorse for what they've done?"

The family recommended to the commissioners that there should be no time limit on access to healing services, such as counselling, for the relatives of victims.

Chief Commissioner Marion Buller sat in on the public hearings on Wednesday, after attending a two-day conference in Alberta.

She told reporters she hopes Canadians are listening and learning.

"The violence that Indigenous women and girls experience all across Canada is very pervasive and takes more than one form and is ongoing, unfortunately," she said. 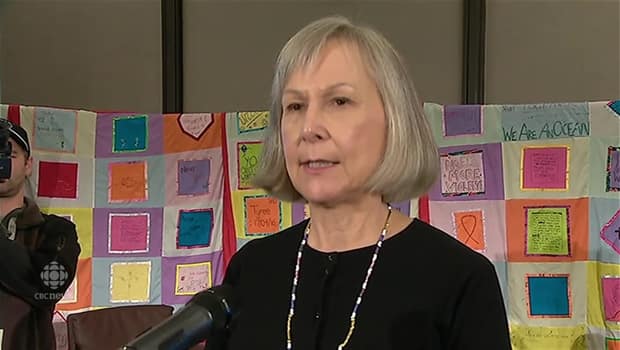 The commission's interim report is due Nov. 1. Buller said it will contain a few recommendations as the inquiry hits its halfway point. She also said the commission has yet to submit a formal request for an extension.

"We're still in the process of drafting our proposal for more time and more money," she said. "It's going to take a great deal of homework.… We have to be thorough in our work."

Buller is heading to British Columbia on Thursday for meetings.

The inquiry continues hearings in Winnipeg Thursday and Friday.