Minnie Anderson decided to share her daughter Dawn's story after learning the national inquiry into missing and murdered Indigenous women and girls was heading to northern Manitoba, where the 37-year-old died in 2011. 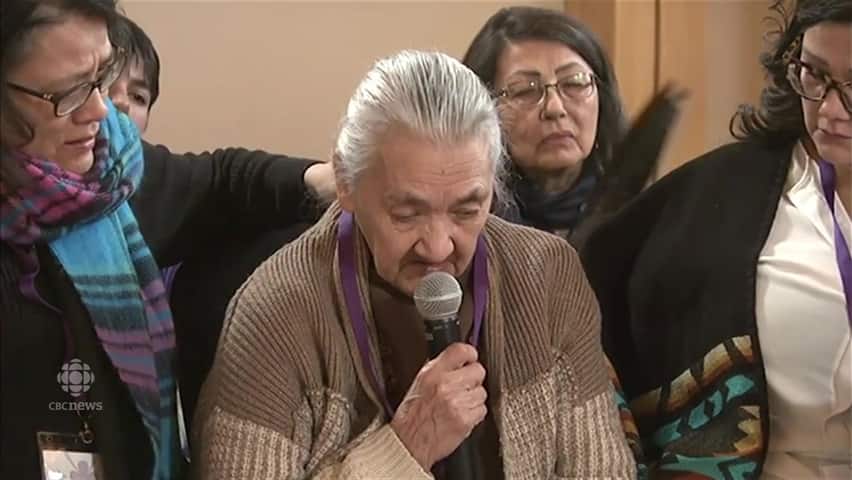 'I miss my daughter so much, I think of her every day': Day 1 of MMIWG National Inquiry in Thompson, Man.

3 years agoVideo
2:04
Minnie Anderson decided to share her daughter Dawn's story after learning the national inquiry into missing and murdered Indigenous women and girls was heading to northern Manitoba, where the 37-year-old died in 2011. 2:04

It's been six years since Minnie Anderson's youngest daughter was found dead in the snow in Leaf Rapids, Man.

Just before 9 a.m. on Nov. 18, 2011, Dawn Anderson's neighbour, an RCMP officer, stumbled upon her body in the town 750 kilometres north of Winnipeg.

"I just wish I could find out what really happened to my daughter," said Anderson. "I just wish that. It would help my family because we have a hard time thinking about that all the time."

The 79-year-old shared her daughter's story publicly at the national inquiry into missing and murdered Indigenous women and girls on Tuesday in Thompson, Man.

The inquiry, launched by the federal government in September 2016, has a mandate to look at underlying causes of violence against Indigenous women and girls, including systemic issues, and make recommendations to end the problem. Commissioners and staff have been touring the country, listening to testimony from family members of missing and murdered women and girls.

Commissioner Michele Audette is attending public hearings on Tuesday and Wednesday in Thompson, a small city about 650 kilometres north of Winnipeg.

So far, 24 family members and survivors registered to testify; there were eight spots for public testimony before Anderson and the rest told their stories privately to a statement taker. Inquiry staff are prepared to accept walk-ins as well, they said.

Minnie Anderson said at first she wasn't sure if she want to participate and she chose not to go to Winnipeg in October for the public hearing there.

But when she found out the inquiry was coming closer to home, she decided to register to speak about her daughter.

The official cause of death for Dawn Anderson, a 37-year-old mother of two, was exposure due to intoxication.

Her family says that doesn't make sense. They say her body was covered in bruises at her funeral: fingerprints on her forearms, bruises on her hands and chin.

"Dawn was my baby. She was the youngest of my 11 kids and she was a very kind person," said Anderson.

"It hurts when I hear the people talk and then I go and think of my daughter. I miss her still very much."

Dawn Anderson's sister Hilda Anderson-Pyrz attended all five days of hearings in Winnipeg in her role as a family liaison with Manitoba Keewatinowi Okimakanak and as the co-chair of the Manitoba MMIWG family coalition, but she's testifying in Thompson.

She said it's important to share her sister's story in the North because that is where she died.

"I think when you look at a lot of the Indigenous women and girls living in our First Nations, especially remote communities … they are not even having their basic needs [met]," said Anderson-Pyrz, citing problems with access to adequate housing, health care, education and justice.

She believes her sister's death was not properly investigated.

"I feel that the way, the quality, the quantity of the investigation that was done into my sister's death clearly demonstrates institutional failure by the RCMP," she said. "There are so many red flags."

Over the years, the family has heard different stories about Dawn's last hours, leading them to believe someone killed her, she said.

For example, people said she was wearing a brown hoodie that was never found, and Dawn called one of her sisters and said she was worried something was going to happen to her.

Those are the reasons Anderson-Pyrz  is sharing her sister's story with the national inquiry.

"I know it will never bring her back. I highly doubt we will ever see justice in what happened to my sister, but I also think it is a good way to build allies with the rest of Canadians to make them recognize that everybody has a part to play in ending the violence against Indigenous women and girls," she said.