'Do you want to get revenge on the Métis people?': MMF president David Chartrand

Manitoba's Progressive Conservative government has terminated another deal between the province, Manitoba Hydro and the Manitoba Metis Federation.

The Turning the Page agreement (Kwaysh-kin-na-mihk Ia paazh in Michif, the Mé​tis language) was signed in 2014. It laid out the terms for $20 million worth of payments to the MMF over 20 years in exchange for support for Manitoba Hydro activities, including the Bipole III transmission line and the Keeyask generation project.

The cancellation provoked an angry and personal response from the MMF on Wednesday, directed at Premier Brian Pallister.

"Why in the hell would you make that decision? What guided you? Is it vindictiveness? Do you want to get revenge on the ​Métis people because they stood up against you?" said MMF president David Chartrand.

A termination clause had been written into the agreement that allowed any of the three signatories to opt out of the deal.

Chartrand said the provincial government violated the honour of the Crown when it exercised its option to end the agreement.

Pallister told reporters Wednesday afternoon his government was ending the practice of paying people not to participate in environmental consultation processes.

"The Métis federation and all Métis Manitobans have the right to participate in processes. They fought hard for those rights and we respect that. Enough to make sure we won't make payments to stop them from exercising those rights, now or in the future," Pallister said.

Pallister said he accepts there could be legal costs or delays with future Hydro projects or other developments as a result of his government's decision.

It is the second such arrangement cancelled by the Manitoba government.

Pallister also cancelled a $67-million agreement between the three parties in March this year after calling it "persuasion money."

Pallister said the cancellation of the agreement was the reason nine of 10 of the board of directors of Hydro resigned, though outgoing board chair Sandy Riley disputed that statement, saying the premier had refused to meet with the board on several issues.

Chartrand vowed earlier this year to launch a court battle with the provincial government over the cancellation of the $67-million agreement.

The deal was negotiated by Hydro to get support from the MMF for construction of the Manitoba-Minnesota transmission line project.

At a press conference at MMF headquarters in Winnipeg on Wednesday, Chartrand questioned Pallister's business acumen and the reasons for the decision, and promised years of legal fights were coming.

The MMF president also took a swipe at Crown Services Minister Colleen Mayer, suggesting it was "sinister" that Mayer — who is Métis — was in charge of Hydro and party to cancelling the deal with the Manitoba Métis Federation.

Mayer spoke with reporters after question period Wednesday, saying while she spoke for all Manitobans and all Métis, that wasn't necessarily the case when it came to Chartrand and the MMF.

"I have heard voices in our communities who, they believe that president Chartrand doesn't represent their views," Mayer said.

Chartrand also suggested the government would turn its focus to cancelling agreements with other Indigenous groups.

"Imagine, after he gets us, First Nations are next. He's got to hit them next," Chartrand said.

Chartrand suggested all decisions about the future of Hydro are made by Pallister himself, sidestepping its executives and board of directors.

Efforts to rebuild the relationship between the PC government and the MMF stalled after Pallister said the cancelled $67-million payment was "hush money" paid to a "special interest group," and a series of meetings between the two sides were either cancelled or reached no consensus.

Chartrand says the cancellation would mean MMF opposition to projects critical to Hydro, including the Manitoba-Minnesota transmission line and another power line to Saskatchewan.

Political fallout to the Tories' decision came fast and furious.

NDP leader Wab Kinew called it an effort by Pallister to divide Manitobans and challenged the premier's reasons for doing it.

"Let me put this in nuanced terms. Everything the premier told you was a lie. It is remarkable to me that the premier could come out say everything that he just said. He is clearly disrespecting the government of the Métis people," Kinew told reporters.

Liberal leader Dougald Lamont noted the PC government had no difficulty bailing out the Winnipeg Blue Bombers for millions in loans they couldn't pay, yet would cancel a signed deal with the MMF.

Lamont said Manitoba Hydro has lost its entire board and CEO this year and has had two separate ministers in charge of the file, yet this was the direction the Tories were taking.

"This has been a year of absolute chaos at Manitoba Hydro. It has an unbelievable amount of debt. It has almost as much debt as the entire province and it's growing and the premier is breaking old agreements?" Lamont said. 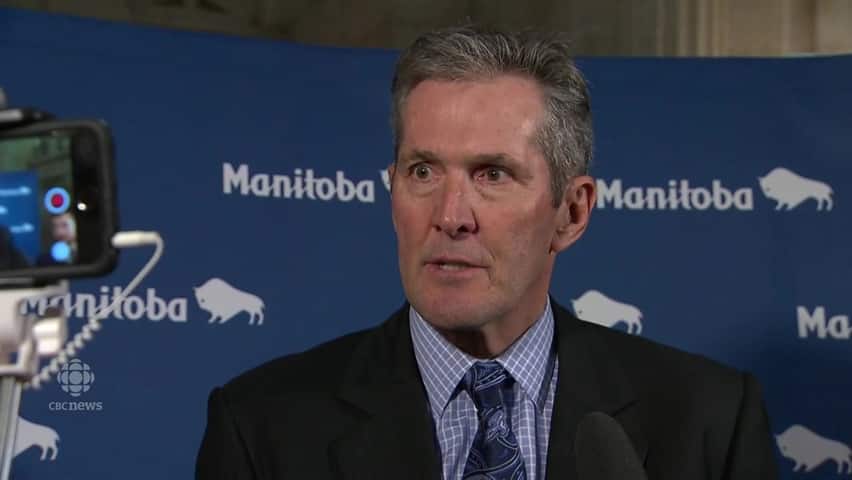 Pallister under fire after province cancels 2nd agreement with MMF