A Ghanaian woman found dead near the Canada-U.S. border was on her way to see her newborn granddaughter in Toronto and had been living in the U.S. under an expired visa, CBC News has learned.

Mavis Otuteye, 57, was living in U.S. with expired visa and planned to go to Toronto

A Ghanaian woman found dead near the Canada-U.S. border was on her way to see her newborn granddaughter in Toronto and had been living in the U.S. under an expired visa, CBC News has learned.

Mavis Otuteye was heading for Toronto to see her daughter's five-week-old newborn when she was reported missing, said Maggie Yeboah, president of the Ghanaian Union of Manitoba.

Border patrol officers on the U.S. side found Otuteye dead in a ditch after several hours of searching.

Yeboah said she talked to Otuteye's daughter about what happened.

"She's not taking it very well. She is the only daughter," Yeboah said.

"Mavis doesn't have any other children aside from her. She's very devastated."

Mavis Otuteye's niece Augustina Otuteye said she felt something was wrong when she spoke to Mavis last Thursday.

"She sounded very quiet, but I thought maybe she was tired or not feeling good, so I said, 'OK, I will call you back later, I will let you rest.''

That was the last time Augustina spoke to her aunt. Augustina said she tried calling Mavis last Friday, but got her aunt's voicemail. She kept trying all weekend but couldn't get through.

"Me and Mavis, we talk three to four times a day. She didn't answer, so I thought maybe something happened," Augustina said.

On Monday, she got a phone call from another aunt in Ghana, asking if she'd heard Mavis was dead.

"It made me feel sad, I cry for two days. I didn't sleep. It was very, very, very disturbing. It's like I'm dreaming. Any time I see the news, I think, 'Wow — this is real?'" Augustina said.

She questioned whether her aunt would have even been able to walk across the border, because she had back problems and limited mobility.

Would have been 'subject to removal' from U.S.

CBC News has learned Mavis Otuteye was living in the United States on an expired visitor visa.

"She came in on a visitor visa and has an overstay since 2006. She was not legally present in the United States. If we had encountered her, she would have been arrested and subject to removal," said Kris Grogan, a public affairs officer with U.S. Customs and Border Protection.

Border patrol officers found her body in a ditch late afternoon last Friday, and an initial autopsy has ruled hypothermia as the cause of death.

Residents in nearby border towns have expressed concern about the safety of the people walking across the border into Canada seeking refuge.

Otuteye's family wants answers into the circumstances surrounding her death, which the Kittson County sheriff's department and the Minnesota Bureau of Criminal Apprehension are investigating.

"Like elsewhere in the world, UNHCR remains concerned by such irregular movements over borders that often put in danger those feeling that there is no other way for them to seek protection," said Azadeh Tamjeedi, a lawyer with the agency.

The agency said it is confident Canada will be "responsive" to the plight of refugees and allow those seeking asylum to get protection in Canada.

Dozens of Ghanaian asylum seekers have made the trek through farmers' fields and walked into Manitoba often through treacherous weather with the hope of seeking refugee status in Winnipeg this year alone.

Yeboah said news of the death of one of their own has sent shock waves throughout the community.

"We are very sad because nobody was expecting this to happen." 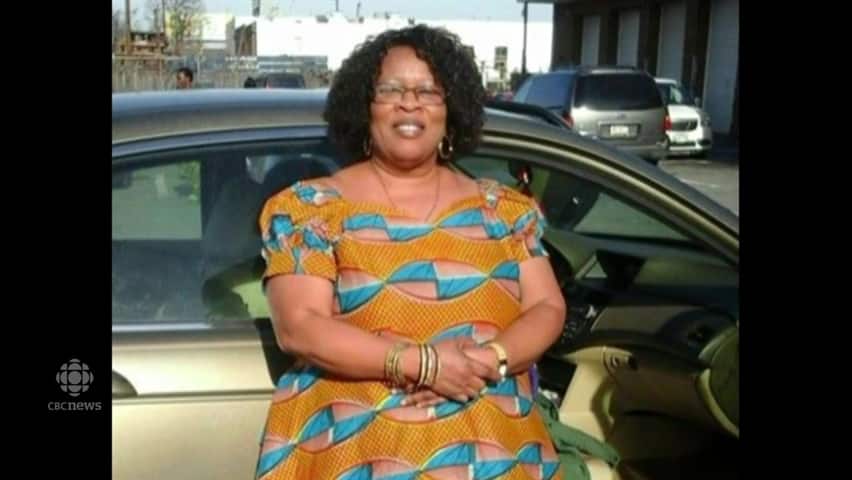 4 years agoVideo
1:24
A Ghanaian woman found dead near the Canada-U.S. border was on her way to see her newborn granddaughter in Toronto and had been living in the U.S. under an expired visa, CBC News has learned. 1:24