The Manitoba government is bringing in the toughest wetland protection in Canada. It has unveiled a $320-million, five-year plan designed to save Lake Winnipeg by reducing the amount of blue-green algae that's poisoning the water. 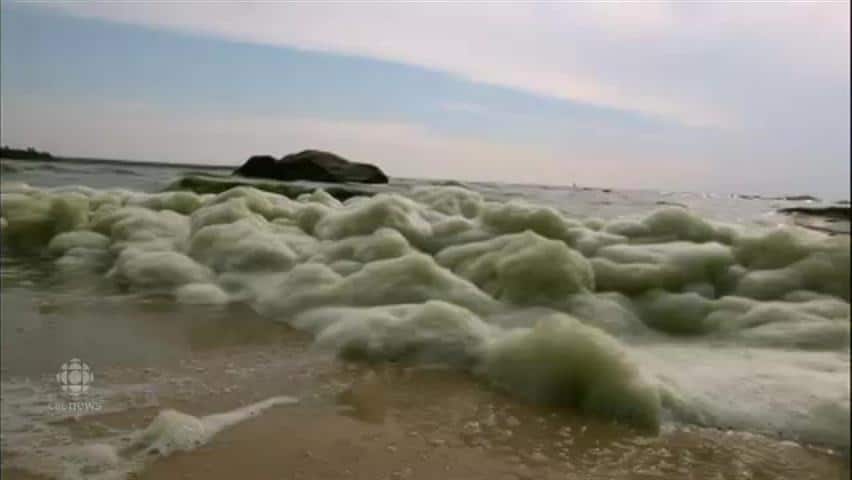 7 years ago
2:03
The Manitoba government is bringing in the toughest wetland protection in Canada. It has unveiled a $320-million, five-year plan designed to save Lake Winnipeg by reducing the amount of blue-green algae that's poisoning the water. 2:03

The Manitoba government is bringing in the toughest wetland protection in Canada.

The $320-million five-year plan is designed to save Lake Winnipeg by reducing the blue-green algae poisoning the water.

The Surface Water Management Strategy, announced Wednesday, aims to do that by dealing with drainage issues, wetlands management and improving flood protection

A group that lobbies for conserving wetlands is thrilled with the plan, which identifies the importance of wetlands around Lake Winnipeg to act as a filter, soaking up the nutrients that pollute the lake and cause algae blooms.

"We've laid out new regulations that protect wetlands … and I think the benefits will be to all Manitobans," said Scott Stephens, director of regional operations for Ducks Unlimited Canada in the prairie region.

Ducks Unlimited has had a consulting role with the government during the creation of the plan, which includes new regulations to protect wetlands, including a quarter of a million seasonal wetlands.

Conservation Minister Gord Mackintosh said 75 per cent of Manitoba's original wetlands have been drained, much of that in areas such as the Red River basin, impairing the natural ability of waterways to retain, release and refresh water over time.

Lake Winnipeg is at a "tipping point" because of excess phosphorous that could have been filtered out by those wetlands if they still existed.

The proposed regulations will make it impossible to drain wetlands and ensure there is no net loss of wetland benefits, he said.

Storing nutrients in wetlands will reduce pollution in Lake Winnipeg by about 50 per cent, Stephens noted.

The new plan will also look at surface water management including flood prevention and mitigation.

Stephens has been lobbying for years to have wetlands protected, noting how their destruction has also led to increased flooding on the Prairies.

The loss of wetlands eliminates a watershed's ability to store water, he has said, noting that 28 acres of wetlands are lost every day in southern Saskatchewan alone.

"This is a step we've been waiting for for many years," added Dave Crabb, president of the Manitoba Association of Cottage Owners.

"We are pleased to hear there's some regulation and enforcement to come with it."

Irma Van Niekerk, who owns a bed and breakfast near Lake Winnipeg at Lester Beach, says the algae blooms on Lake Winnipeg are so bad the water sometimes looks green and soupy.

"The green algae looks like little particles in the water when you're swimming," she told CBC News. "If it gets really bad, it becomes like a green soup against the shoreline."

She added that some of her B&B guests won't even go into the lake in August because it's so polluted.

Van Niekerk said while she applauds the government's plan to reduce the amount of runoff of agricultural chemicals into Lake Winnipeg, she added that everyone who lives near the lake has to take responsibility for their sewage disposal.

Bob Sandford, a world-renowned water analyst and director of the Western Watershed Climate Research Collaborative, said it's a huge job to clean up Lake Winnipeg and it's about time that work began.

He just hopes the province will actually follow through with it.

"This can be done. We know how to do it," Sandford said.

"We just have to do it and the best examples that we have come from, well, Lake Erie, for one. We know that you can restore the health of a lake the size of Lake Winnipeg."

The public is asked to comment on the plan document by Dec. 31.