A new course offered though the Manitoba Blind Sports Association, teaches basics of self-defence. Students say it gives them confidence to lead an independent life and breaks down stereotypes about being blind. 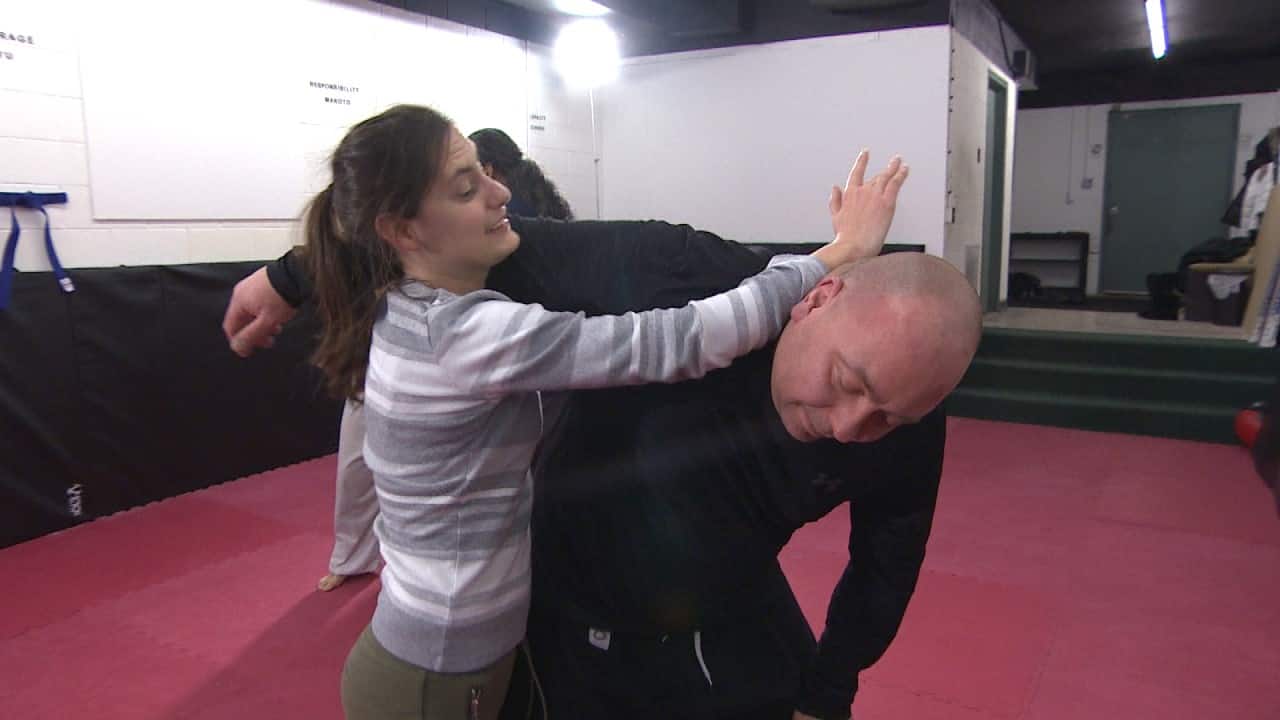 Veronika Kanya's fascination with martial arts started when she was a young girl, with a book by Bruce Lee.

"It was a dream of mine, since I was very, very young," says Kanya. "And when I lost my sight, it was kind of like an awakening for me."

The Winnipegger started losing her vision in 1998, when she was 23.  A few years later, she had lost her sight entirely.

She turned to martial arts to help her through that period in her life and has now been studying martial arts, from kickboxing to aikido and jiu-jitsu, for more than 20 years.

Now, Kanya — who is the president of the Manitoba Blind Sports Association — has helped launch a course that teaches self-defence to other people with visual impairment.

She believes it's the first self-defence course of its kind in Manitoba, and it offers important skills for people with visual impairment.

"Studies show that predators actually can pick out people who are likely to be victims, and [are] much easier to be victimized by the way they carry themselves," she said.

It makes a difference, she says, "knowing that you … have those skills to rely on if need be. That knowledge just comes unconsciously, and you carry yourself differently. You stop becoming the typical prey."

Kanya approached Winnipeg jiu-jitsu instructor Kevin Kummerfield to lead the course. Kanya has been taking classes with Kummerfield for around two years, and has even started training for her own self-defence instructor's certificate.

When she asked Kummerfield about teaching the course, he was enthusiastic about the opportunity.

"As soon as I got involved, I said, 'Well, we've got to bring it to everybody," said Kummerfield. "We want to be a program that anybody can join in."

Kummerfield based the course on work he did with Kanya.

"I am the first blind person that he has ever met," she said.

"I trained in various martial arts over the years, and usually it's an interesting experience for everyone because it's just something different. You have to adapt.… You have to change and evolve the program a little bit for my needs."

Kummerfield taught her based on what's called "B-line self-defence" — a jiu-jitsu-based system that involves moves to overcome larger, stronger opponents.

"It was a really fun project for me to work with [Kanya]," says Kummerfield. "With her it was just a whole new world of questions and challenges to answer."

Kummerfield adds the training in the new course isn't all physical — he says participants also learn about self-awareness and instinct.

"Self-defence is really all about self-reliance — to be able to go and enjoy life and enjoy our freedoms. We have to be reliant on our ability to protect that."

Brittany Nelson, 25, completed the Level 1 training in October and is now taking the Level 2 course. She has had visual impairment since birth, with limited vision in one of her eyes.

The Winnipegger, who loves to travel, says she decided to take the course after an incident in Colombia. She and another woman she was travelling with were approached by a stranger who tried to grab them.

"I didn't know how to react.… We just ran and got away from this individual."

It could have ended a lot worse — "but I wanted to learn," about self-defence, she said.

"I love being active, I love just trying things," said Nelson. "It's just been my life philosophy to do it and see what happens. It's kind of how I live my life."

She says she now feels better prepared to head off on her next adventure — a solo four-week trip to Australia and New Zealand in July.

Kanya says participants in the course have expressed to her how it has given them confidence and encouraged them to conquer their fears.

"You put your own limitations on yourself," she says. "It's just amazing how much more empowered you feel."

Kummerfield says he's learning too — his new students have enriched his life, he says, and have taught him about perseverance.

"They don't identify as blind. That's not who they are. That's part of their lives, just like a lot of things are a part of my life," he said.

"I realize the stereotypes I had, and because we don't want to offend them we end up not teaching, treating them like people."

Kayla Debaets, who works with the Canadian National Institute for the Blind's Manitoba branch, says people who have a visual impairment should be treated the same those who have full vision.

"These programs are geared towards inclusion and providing a space for participants to be involved with the community and have a support system," she said.

Kanya hopes the self-defence course can become a more permanent offering through the Manitoba Blind Sports Association, and will help empower many people along the way.

"Go for it. Life is awesome, especially when you do something you're passionate about."

Marjorie Dowhos is the host of CBC Manitoba's Radio Noon. She is an RTNDA award-winning reporter. Marjorie joined CBC Manitoba in 2010. Prior to that, she was an anchor, reporter and videojournalist in Thunder Bay, Ont., Medicine Hat, AB., Fort McMurray, AB., and Fort St. John, B.C. Marjorie is also the host of the CBC podcast 'Jets Stream'.