More than 60 people gathered outside Maples personal care home Wednesday night to honour the people who have died there of COVID-19 and call for more care for those still living.

What Niki Kotelo knows of her mother's final moments at Maples personal care home is that she was found unresponsive in her room and paramedics could not revive her.

Margert Kotelo, 71, had dementia and was non-verbal. She also had COVID-19, but her daughter holds Revera, the for-profit care home operator, responsible for her death on November 3.

"They completely, completely failed us. And many families. This pandemic will never be over for us because our loved one is gone. And there's no changing that. It's too little, too late and too little overall," she said.

Kotelo was among dozens of family members who gathered outside Maples Long Term Care Home on Wednesday night to honour the 45 combined lives lost at Maples and Parkview Place — another Winnipeg care home operated by Revera — and call for immediate staffing support for those still living at both homes.

"If they're in the same position as my mom was, they are not being adequately nourished, adequately hydrated, there are not enough staff and bodies that are there to care for our loved ones. The WRHA mandates 3.6 hours of care per resident per day … I don't know that my mom even had minutes of care last week," said Kotelo.

Families who took part in a virtual town hall with Revera Tuesday night said company officials admitted they are not currently able to provide the Winnipeg Regional Health Authority's standard of 3.6 hours of care per resident because of staffing deficiencies, but hoped with Red Cross support arriving Friday, they could come closer.

Kotelo wants the WRHA or province to immediately take over the Maples personal care home. She said Revera's executive director admitted to families in Tuesday night's town hall that staff were no longer recording residents' fluid and nutrition levels, as their basic needs took priority.

"The sad thing is many things go undocumented and I believe in there if it's undocumented it simply didn't happen."

She also wants the province to take over, because her loved one's care suffered, especially last week.

"She's saying that she's sitting in her own urine, no one's been to see her, and we called the ambulance right away, the paramedics. Because no one was responding to us," said Bluschke, adding Gregory tested positive for the virus and was transported to hospital the next day on November 3.

She said a nurse called and apologized for the delay in responding to the family's calls and explained she was in charge of 60 patients.

On Tuesday's town hall, families said Revera officials said 45 staff members are self-isolating with COVID-19 and they're trying to get replacement staff through agencies. Families were told patients are getting bed-baths, but not bathed, and security personnel are bringing residents their meals.

Bluschke wants the province to put an end to for-profit care homes.

"I really feel like Revera put a price tag on our families. That they weighed the cost of hiring, or getting more people in there, against our families. Why wouldn't they call for help?"

She said her family could never reach anyone at the home to find out how her mother-in-law was doing. She spoke on behalf of the family and her husband on Wednesday night, because the pain was still too raw for him to be there.

When Gregory died on Friday at the Grace Hospital, the family believed everyone had done the best they could for her. She said when they learned of the crisis that happened there Saturday, they were 'beside themselves.'

Larry Baillie's father Glen Baillie, who had lived at Maples, died Wednesday morning of COVID-19 at the Grace Hospital.

Later the same day, Larry asked Premier Brian Pallister and Health Minister Cameron Friesen to work with the families on a bill that will ban for-profit agencies in long-term care. He wants the WRHA or military to take over immediately.

"I'm being a voice. That is for my dad. This is for Sgt. Glen Baillie of the Metropolitan Toronto Police Department. Please. Thank you," he said.

Laura Henry, who organized the vigil, held a photo of her grandmother Joan Moses, who lives in Maples care home and has not tested positive.

"I hope she's sleeping well. That's really what I'm thinking about … I want our government to stop posturing and to call in the military, call the federal government. We're all Canadians, we all have loved ones, it's time to help them out," said Henry.

"They need our help. These health care workers are just dropping. They're exhausted. They're crying. We need help now."

Watch: Families at a vigil outside Maples Personal Care Home, plea for help. 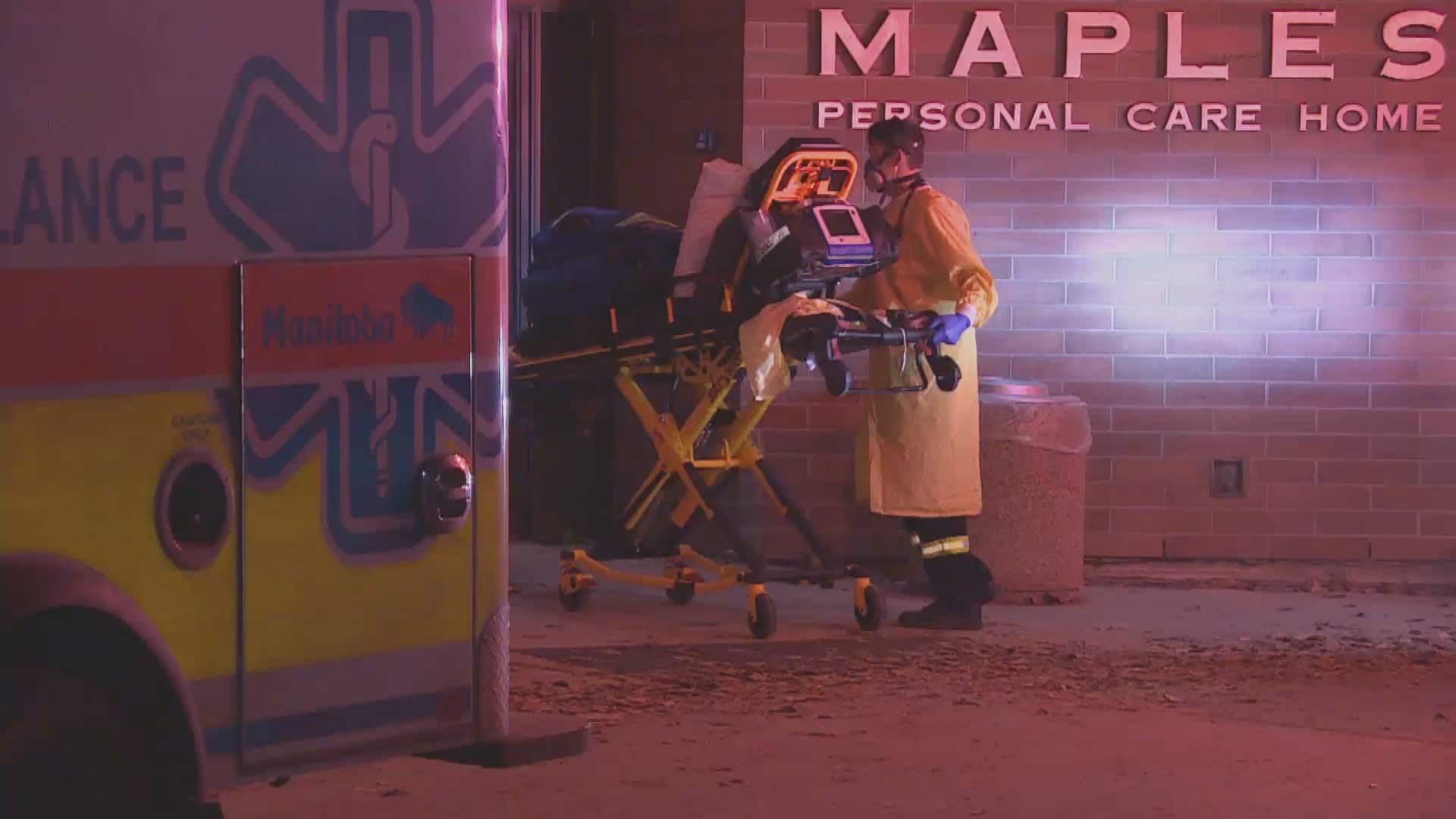