The goal of Orange Shirt Day is to create a conversation about the legacy of residential schools and reconciliation. 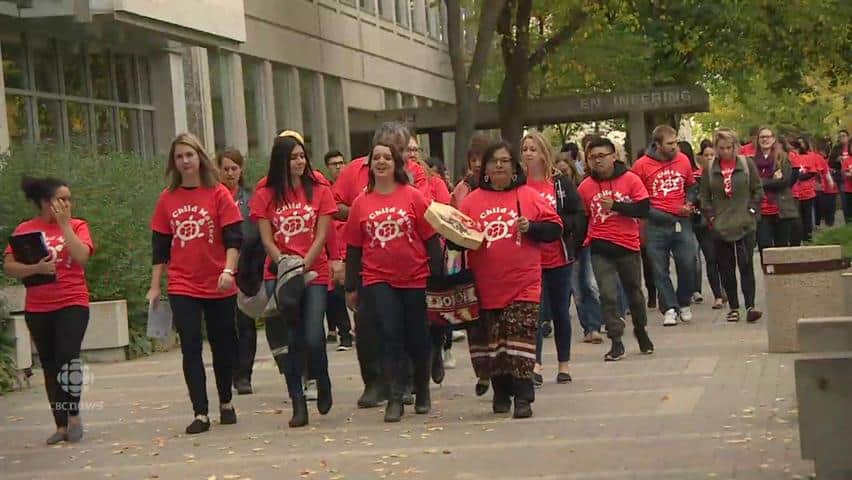 "I don't know my full culture, I don't know my native language. It was something that was stopped with my great-grandmother," said Grade 12 student Vanessa McKay.

McKay said she discovered her own family's history after learning about residential schools at school.

"I would come home and talk to my parents about it and details would slowly come out over time," said McKay. "It's not really something that's brought up at family dinners."

McKay is a part of the student group who brought Orange Shirt Day to her school. Over the lunch break, they had a sharing circle about the impact of the schools and handed out orange bracelets.

"I think it's extremely important to remind everybody that this happened," said Lexi Yeo, who is also part of the group. "It hurts to believe we are capable of such disregard to others' well being.'"

Yeo, who is Icelandic, said she wants to learn more about residential schools and believes connecting with McKay is a good place to start.

'It's all about being kind'

Andrew Mead, the principal at George Waters Middle School, said wearing orange was meant to be more than just a history lesson.

"Kindness, it's all about being kind and treating people like they are people and being good to each other," said Mead.

Briana Ehrmantraut wore orange for her grandmother, a survivor of residential schools.
1 of 0

"She is a very strong woman, she is a real inspiration to me because of all that she went through," Ehrmantraut said.

Nadine McDougall, who attended a residential school in Teulon for three years, said she was overwhelmed by the outpouring of orange support at the University of Manitoba Wednesday.

"It almost feels like a little piece of justice happens for us survivors when we have groups like this acknowledging our experience," she said at a rally at the U of M.

The rally was organized by students in the Faculty of Nursing at the U of M to pledge to provide culturally safe care to patients and understand the multigenerational effects and trauma caused by residential schools.

"It's a really good feeling, it's a turning point and I think it highlights the fact that we are making a change and everyone is acknowledging it," said Heather Waloshuk, the indigenous representative in the faculty.

Orange Shirt Day started in 2013. The idea stems from a story told by a former residential school student, Phyllis Webstad. On her first day of residential school, when she was six years old, her brand new orange shirt — that had been bought by her grandmother — was taken away from her.

All Canadians are encouraged to post a selfie of their orange shirt on social media to continue a national conversation on the impacts and reconciliation.