Early-fall snowstorms have delayed harvest seasons for many Prairie grain farmers, but there's at least one crop that was able to be pulled from the ground this Thanksgiving weekend for a good cause.

Early-fall snowstorms have delayed harvest seasons for many Prairie grain farmers, but there's at least one crop that was able to be pulled from the ground this Thanksgiving weekend for a good cause.

A group of Yazidi refugees and farmers got their hands dirty at a farm near Portage la Prairie where they heaved up wheelbarrow after wheelbarrow full of potatoes.

Volunteers from Operation Ezra, which sponsored many Yazidi families that settled in Winnipeg, have been working with the refugees to grow potatoes for their families since this summer.

They sowed 200-300 potato plants at the farm in June, and on Sunday the Yazidi families reaped the benefits when they harvested an estimated 3,000 potatoes. 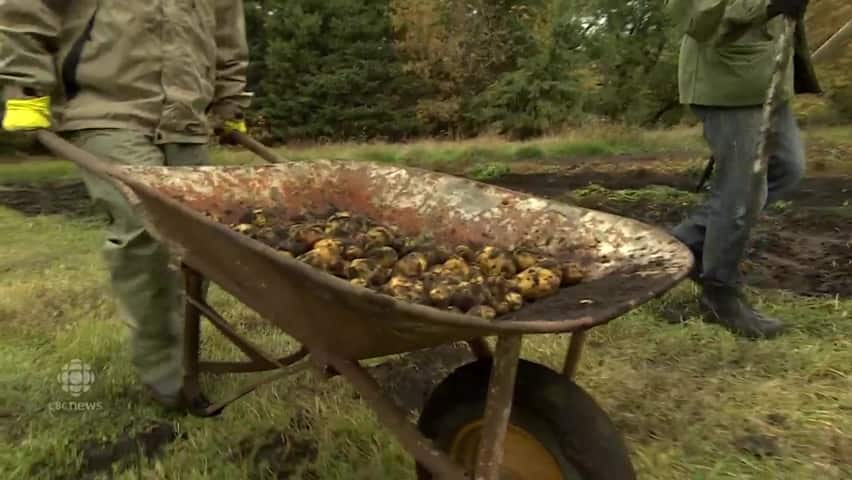 Farmer Ross Tufford offered up a patch of of his farmland for the project that is too small to farm commercially, and worked with the families to grow the crops.

"It is a very rewarding experience," he said Sunday. "You can tell that they're grateful and they're very interested in the soil and the farming."

Tufford said his family used the small portion of land to grow vegetables when he was young but has been unused for years.

About 10 Yazidi families were privately sponsored by Operation Ezra two years ago, part of a wave of thousands to leave their homes in Iraq beginning in 2014 when ISIS began targeting the local religious minority.

Faissal Naso, a Yazidi who moved to Canada from Iraq 18 years ago, has been helping them get settled and grow the vegetables.

"I can imagine how it was like when I [was new] here," he said. "I see these guys in my shoes, so we try and help them out every step of the way."

Farming is common and widespread among Yazidi people, Naso said, and the newcomers have been excited to learn the differences between Iraqi and Canadian soil and weather patterns.

"They were telling me about the different types of soil they used to grow different crops, different times of the season, so they have a lot of experience and knowledge in the farming industry," Naso said.

Tufford's niece Megan Sodomsky, a volunteer with Operation Ezra, came up with the potato plan.

She and others with the group started running food relief benefits after learning some government-sponsored refugees didn't have access to enough food and other resources to support their families.

Running those benefits or "food drops" became expensive, Sodomsky says, so they started brainstorming other ways they could get food onto the tables of Yazidi refugees.

It dawned on her that her family would probably let the Yazidi families plant on their farmland near Portage la Prairie.

"I spoke to my dad and my uncle the next week and they said, 'Yeah no problem,'" recalled Sodomsky. "About a week after that we were here with seven guys planting."

Her dad and uncle, who have been farmers their whole lives, dug a trench with their tractor. The Yazidi families did the rest.

"Really they did this all themselves," said Sodomsky. "It's really incredible to see everyone working together."

The final step of the day was to give the potatoes a good cleaning, bag them and get them off to families in need, she said.

Operation Ezra hopes to acquire some land closer to Winnipeg next year.

With files from Pierre Verriere