The Manitoba government has introduced legislation on Tuesday restricting the use of certain chemicals for weed control on lawns.

The forthcoming pesticide restriction extends to grass around hospitals, schools and daycares 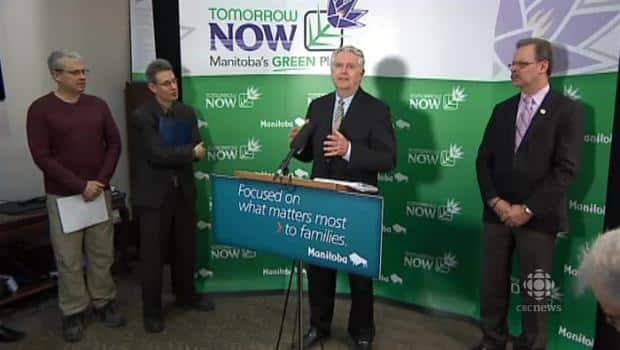 7 years ago
1:58
The Manitoba government introduced legislation Tuesday restricting the use of certain chemicals for weed control on lawns. 1:58

The Manitoba government has introduced legislation on Tuesday restricting the use of certain chemicals for weed control on lawns.

Pesticides would also not be allowed on grass around hospitals, sidewalks, schools and daycares under the new legislation.

The legislation doesn't ban pesticides outright, but it would require use of pesticides thought to be less potentially harmful.

Pesticide use in the agriculture and forestry industries would not be impacted by the province's new restrictions. The legislation won't extend to gardening; golf courses will not be affected; and the legislation doesn't apply to use of pesticides in the removal of invasive or poisonous weeds either.

The legislation is good news for some, but others argue it will complicate lawn-care for Manitobans.

"It seems like ban or no ban... it just doesn't seem like the smart way to approach this," said Ken Wiebe, co-owner of Eco Green, a lawn-service company with locations in Winnipeg and Brandon.

Wiebe said the alternatives the government will allow for cosmetic weed spraying are more expensive and less effective.

Amanda Kinden is with the Green Action Centre, a Winnipeg non-profit that champions "green solutions" and environmental education. The legislation is being celebrated by environmental activists that have been pushing for pesticide restrictions for some time.

"We are ecstatic," said Kinden. "We are very happy the government is going to take this step and protect Manitoban's health, for sure."

Kinden said that her biggest concerns are related to child and public health issues.

"Our children are the ones rolling around in the grass and they have extremely close contact," said Kinden. "They put their hands in their mouths a lot. Their organs and brains are still developing, so they are really susceptible to these chemicals."

Mackintosh said that there is ample evidence to support the restrictions, but as far as Wiebe is concerned, chemicals his crews have always used are safe. He said the new legislation is out of step with what other regulatory bodies have said about the safety of the soon-to-be-banned pesticides.

"The World Health Organization, Health Canada, the EPA in the United States, they've all recently reviewed these products that are about to banned and have said they are safe for use," said Wiebe. "So you wonder why they are banning it ... it must be completely political," said Wiebe.

As a result of some of the different rulings on pesticide safety, Wiebe questions the province's rationale on these matters.

"We trust Health Canada for food safety, pharmaceuticals, pesticides… they look after all of that," said Wiebe. "They are the ones that make the instructions on the product that we have to follow. Why the government would choose to not listen to Health Canada is just baffling."

But Kinden and other Manitobans just want their lawns chemical-free, "which is possible," she said.

"There is a lot of pressure that people receive from their neighbours to maintain [lawns], for sure," said Kinden. "But the thing is there are already organic lawn care companies operating in the city."​

"And the thing about using the chemicals on the lawns is that you actually kill all things in the soil that help the lawn," said Kinden.

Manitoba is the sixth province to prohibit the cosmetic use of certain pesticides.

The restriction starts in 2015, but will not include spraying golf courses and would not stop someone from buying pesticides outside the province and bringing them back to Manitoba.​

Mackintosh said if the province can convince retailers to stop selling synthetic chemicals, that will also reduce their use.​

"We know in other jurisdictions it becomes self-enforcing. You know, neighbours talk to neighbours. But as well, we have environmental officers and people can make a complaint down the road. But our effort right now is to focus on getting compliance voluntarily."