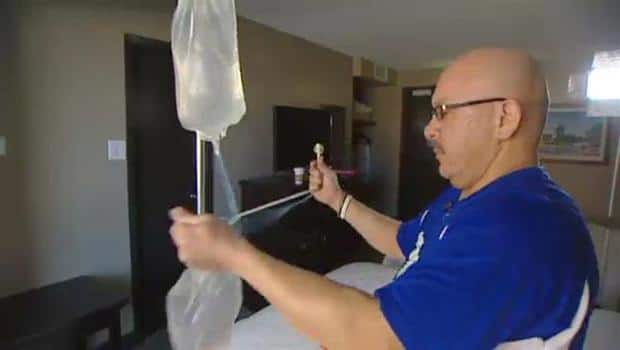 A new $1.6-million program will have health professionals travel to First Nations communities across the province for kidney disease screening.

Communities will be provided with screening and follow-up care and education.

The province is aiming to cut down on dialysis and emergency care through the program.

Derwin Daniels needs dialysis four times a day because his kidneys can't function on their own. He first started having problems in 1994.

"The doctors didn't even know what was going on with me then. All they did was tests, took blood from me, for eight years," he said.

Now, Daniels administers the dialysis himself at home, but he said years of not knowing what was wrong were difficult.

"There's no need for anybody to live life and not know what's wrong with them. I would rather see them get help before the stages get worse," said Daniels.

The Assembly of Manitoba Chiefs has teamed up with the province and the federal government to ensure similar situations don't happen again.

"They are facing an ever-increasing challenge to get the base level of support services that so many of us have taken for granted in the urban centres," said Grand Chief Derek Nepinak.

The program will launch in March, which is Kidney Health Month in Canada.

Three mobile trucks, each with their own team of health professionals, will travel into each community to conduct tests for kidney disease.

"We have two nurses who are going to be leading that unit, and they are going to do specific testing to renal health," said Rose Lavallee, a registered nurse who works with the diabetes integration project.

Lavallee said nurses will look at a number of factors including having diabetes and blood pressure rates. She said testing takes less than 30 minutes per person.

Daniels said he hopes people will take the time for the tests.

"If they had that back then, I would take it right away. Maybe it would've changed my life," he said.