A 16-year-old Manitoba girl has finished running 115 kilometres to raise awareness of missing and murdered indigenous women and girls in Canada, but Tracie Léost says her work isn't over yet. 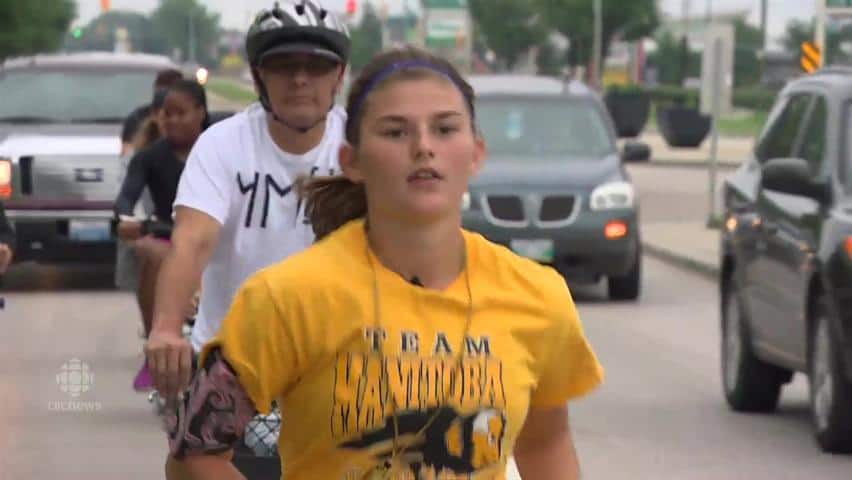 5 years ago
1:47
A 16-year-old Manitoba girl has finished running 115 kilometres to raise awareness of missing and murdered indigenous woman, but Tracie Leost says her work isn't over yet. 1:47

A 16-year-old Manitoba girl has finished running 115 kilometres to raise awareness about missing and murdered indigenous women and girls in Canada, but Tracie Léost says her work isn't over yet.

Léost began her Journey of Hope in the Lake Manitoba community of Oak Point on Wednesday morning. She completed it at The Forks in downtown Winnipeg on Saturday afternoon.

"I'm doing good. I'm feeling good to finally get here and have finished it and yeah, now on to new things to make this even bigger," Léost told CBC News after she arrived.

The competitive runner said she was motivated to make the journey as a way of drawing attention to an important issue she feels needs to be addressed.

Her journey has not been easy — she said on one day, the blisters on her feet were so bad that she could not put shoes on. She ran part of the way in moccasins.

"The things these girls go through when they go missing, or in their last moment of their lives — I mean, it's nothing near the little blisters on my feet that I can one day get over, right?" she said.

Léost is also raising money for the Families First Foundation, which helps the families of missing and murdered indigenous women and girls.

A GoFundMe crowdfunding page that she launched as part of the run raised $1,708 of her $2,000 goal as of Saturday afternoon.