More heavy rain on the way for southwestern Manitoba

Environment Canada's special weather statement issued for southwestern Manitoba forecasts even more heavy rain Saturday, in what has been an unusual month of precipitation in the province.

Don't put away your umbrella or rain boots just yet.

Environment Canada has issued rainfall warnings for much of southern Manitoba, including Winnipeg, after issuing a special weather statement forecasting more heavy rain Saturday, in an unusual month of wet activity.

Some areas of southern Manitoba have already seen 50 to 100 millimetres of rain since Thursday night, Environment Canada said, and another 40 to 60 millimetres could fall by Sunday morning.

Average precipitation in Winnipeg for the entire month of September is usually around 45 millimetres, according to Environment Canada.

"We could see some very, very soaked fields, flooded streets, flooded basements are possible," he said.

"I think people just need to have their downspouts in place and take measures to really mitigate any kind of water getting into the basement. It's that kind of weather we're going to see for the rest of today and on into Saturday evening."

Sauder said southern Manitoba could be windy with gusts at 40 to 60 km/h.

Although it looks like a mostly soggy weekend, Sauder said, Manitobans have something to look forward to.

"The good news is Sunday we will start to see some sunshine, especially later in the day."

Environment Canada said the slow-moving weather system, heading to the east-northeast from North Dakota, is expected to move on from southern Manitoba into northwestern Ontario by Sunday morning.

As of 10:45 a.m. CT, Environment Canada's rainfall warning extended to:

On Friday, a severe storm swept across southern Manitoba, and in Winnipeg, fire and paramedic crews, along with city workers, were kept busy.

Jay Shaw, assistant chief of the Winnipeg Fire Paramedic Service, said over 250 service requests were called in and fire crews responded to six incidents involving people  stuck in their vehicles due to high water.

"They had either driven into water or had been parked and the water came up quickly in their vehicles," he said.

"I would consider this to be an extremely taxing and busy day for the Winnipeg Fire Paramedic Service and all city departments." 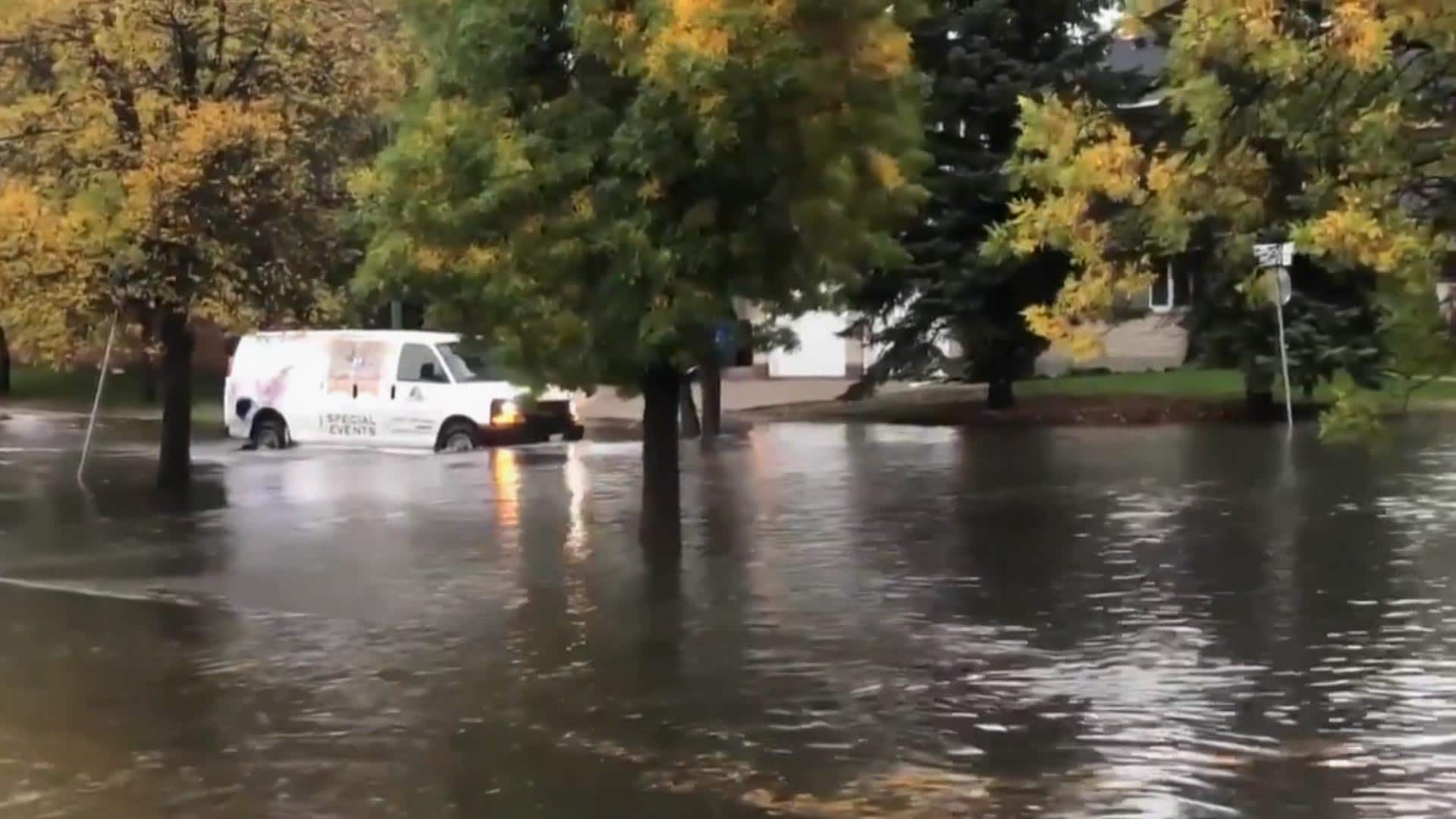 1 year agoVideo
1:57
A day of unsettled and severe weather is pounding southern Manitoba and flooding streets in Winnipeg. 1:57

Shaw said with more rain on the way, there are a number of things drivers should keep in mind to stay safe.

"We want to remind citizens and folks that are visiting the city of Winnipeg that if you come across a roadway that is high water that's covering the painted lines, or the water is going over the curb, you don't want to drive through those roads. It could be a risk to you," he said.

In addition, visibility could be reduced because of the rain.

"If the rain is to the point where you lose visibility, pull over, stop, and wait in a safe location until your visibility increases," Shaw said.

He said homeowners should make sure their sump pumps are working and their downspout is turned down.