As parts of Eastern Canada struggle with record flood levels, Winnipeg is unusually dry. That's partly because of a long, slow spring melt, but also because of investments in dikes, dams, diversions — and something called Duff's Ditch. Could Manitoba's flood-protection solutions work elsewhere?

As parts of Eastern Canada struggle with record flood levels, Winnipeg is unusually dry. That's partly because of a long, slow spring melt, but also because of major investments in dikes, dams, diversions — and something called Duff's Ditch.

It raises the question: Could Manitoba's flood-protection solutions work elsewhere in Canada?

To answer that, we first have to understand the recent history of flooding and infrastructure investment on the Red River, one of the few in North America that flows north.

In 1950, the Red River inundated one-eighth of Winnipeg. In low-lying areas, the water was 4.6 metres deep. It forced 100,000 residents from their homes.

"You only have to look at the pictures from 1950 to know that having that happen again to the city of Winnipeg wasn't an option," said Jay Doering, a professor of civil engineering at the University of Manitoba.

So, after more than a decade of debate and studies, Manitoba constructed a 47-kilometre, $63-million ditch, known as the Winnipeg Floodway, to divert floodwater and spit it out safely back into the river on the north side of the city. Now known as the Red River Floodway, it's also sometimes called Duff's Ditch, after then-premier Duff Roblin.

Pumping stations and 114 kilometres of dikes were also built within the city.

WATCH | See how bad the flooding got in Manitoba in 1950 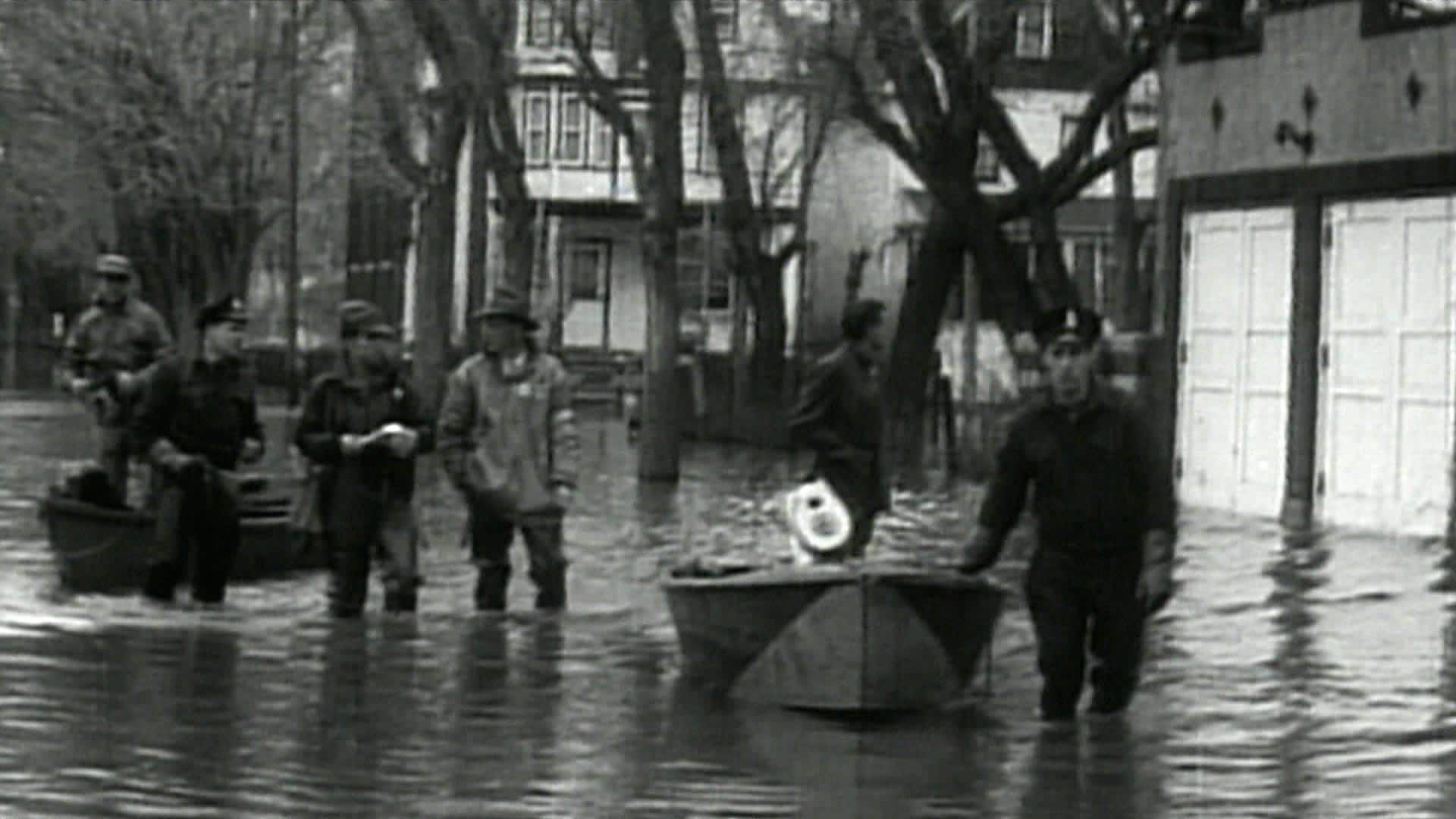 See how bad the flooding got in Manitoba in 1950

2 years ago
0:58
That flood eventually led to the creation of the Red River floodway, which has saved the province billions 0:58

In the 1970s, the province constructed a $30-million diversion channel and reservoir on the Assiniboine River to keep water out of the city from the west.

Then came 1997 and the Flood of the Century. It was substantially larger than the 1950 flood, but resulted in far less property damage because of the flood-control measures in place. Still, it strained the floodway's capacity.

The overflowing Red River became the largest in North America, covering an area the size of Prince Edward Island.

Doering says it was another wake-up call "that we probably didn't have the level of protection that the city of Winnipeg needs."

So, another $630 million was spent to expand the floodway. It's now meant to defend the city against a one-in-700 year flood.

Before 1997, eight communities in the Red River Valley were protected by ring dikes. After that flood, an additional eight were built.

"Whether it's climate change or whether it's just normal events, the reality is we have these events and they're not going to go away, so we need to look at options for protecting communities so that the damages are minimized, the anguish is minimized," said Chris Hamblin, deputy mayor of Morris, a town south of Winnipeg along the Red River that's surrounded by a ring dike.

"When you see the damages and the millions of dollars to get those people back to their normal life states, you know the investment isn't as big as it is it seems."

The main highway connecting the United States and Winnipeg was raised to protect it from flooding.

Homeowners were told to rebuild in accordance with flood-protection standards or they would not be eligible for compensation after any future floods.

The thinking was: "We can't keep compensating. We need to be proactive on managing floods in the Red River Valley," Doering said.

There have been two major floods since 1997. Both times, Winnipeg stayed largely dry.

As of 2013, the floodway had saved an estimated $32 billion in damages, according to the Manitoba Floodway Authority and a 2014 TD Economics report.

That means it has paid for itself 40 times over, and counting.

"That would be a large amount of money in roughly 1960 dollars, and at the time, Premier Duff Roblin took a lot of heat for those investments. But when we reflect back now on the billions and billions of dollars that they have mitigated, obviously it was a visionary move," Doering said.

"We have come a long way in terms of being proactive with our floods, keeping the communities and keeping the city of Winnipeg protected."

But could it work elsewhere?

Last week, New Brunswick Premier Blaine Higgs raised the idea of constructing a type of floodway at the south end of the St. John River. He's looking into a preliminary assessment to determine whether a spillway would make sense.

"We can do something in the Saint John area to spill more water out into the Bay [of Fundy]," he told CBC News.

"It could be a tunnel pipeline that would be able to connect around the falls and directly to the bay."

A spillway could work structurally, says Slobodan Simonovic, a civil and environmental engineering professor at the University of Western Ontario who spent much of his career in Manitoba and lived through the 1997 flood.

However, he says, cities in New Brunswick may not have enough population to justify the infrastructure cost that has made economic sense in Winnipeg.

"That kind of cost-benefit ratio would be very different."

The Ottawa River Valley, meanwhile, has a different set of problems to consider: too many communities to protect and hydropower development that conflicts with flood control. Any changes would also affect the St. Lawrence River.

"I don't think that a single structural solution will work in that particular area," Simonovic said, especially considering there are also jurisdictional complications in dealing with two provinces, Ontario and Quebec, and two countries, the U.S. and Canada.

Cities like Montreal can get some useful ideas from Manitoba's network of dams, dikes and diversions, but "finding the best way of managing the system and co-ordinating among different players will be definitely the solution," Simonovic said.

Calgary is also dealing with flood mitigation and protection projects.

With flood threats becoming more common and more costly, Simonovic says the only solution for some cities may be to move people out of flood plains.

What's important, he says, is politicians should not wait for the next disaster, but "use the time in between to come up with the solutions that will be minimizing the future impacts."

"They need to ask what level of compensation is being paid out? What's the cumulative compensation and what might we do now to be proactive in order to offset that?

Last week, Quebec Premier François Legault said homeowners with flood-damaged properties would be eligible for up to $100,000 in compensation. But beyond that, the government would offer a maximum of $200,000 to buy the property.

"We cannot [offer] every year compensation to solve problems, but only on a temporary basis," he said. "We really need incentives to move the people when it's happening every year or almost."