As the province is tightening retail restrictions, Manitobans are ramping up their efforts to keep local businesses alive through the pandemic.

Businesses deemed non-essential have been shut down since Nov. 12, with crucial holiday shopping season here

As the province is tightening retail restrictions, many Manitobans are ramping up their efforts to keep local businesses alive through the COVID-19 pandemic.

"It's crunch time for retailers, where you can make up to 50 per cent of your yearly income in the month of November and December just due to the holiday seasons," said Trish Wittmann, co-owner of Riley Grae, a boutique on Winnipeg's Corydon Avenue.

The shop, which carries local and internationally made goods, vintage collectibles and jewlery, is the passion project of her daughter, co-owner Lauren Wittmann.

Trish Wittmann says that she's never seen a push to shop local like this before, but she's not sure if the increase she's seen in online sales will be enough for her store to survive, if storefronts have to remain closed.

Small business owners like the Wittmanns had to quickly shift their focus from in-store sales and holiday markets to online shopping as the province forced businesses deemed non-essential to shut down as of Nov. 12.

Still tougher restrictions were announced Thursday, prohibiting all stores in Manitoba from selling any non-essential goods in-store as of this weekend.

"You're supporting your friends, your family, your neighbours," said Bencharski.

During previous holiday seasons, Bencharski has organized her own market called 204 Thryft, but this year she's promoting local shopping on social media.

Manitobans have also started pooling their resources to create one-stop online shops like the Winnipeg Etsy Street Team and fetchlocal.ca. 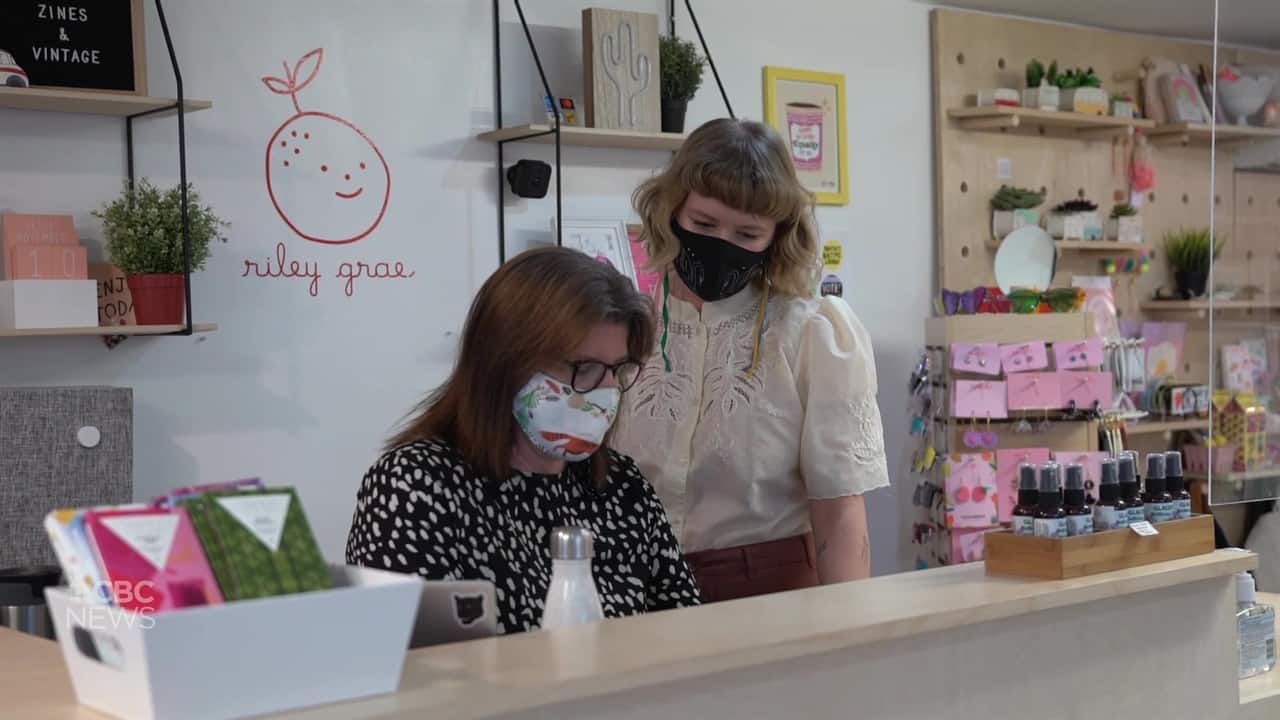 3 months ago
2:07
As the province is tightening retail restrictions, many Manitobans are ramping up their efforts to keep local businesses alive through the COVID-19 pandemic. 2:07

The Shawarma Khan owner is one of the people behind the newly launched website GoodLocal, which brings together over 100 local businesses into one online store.

Carinna D'Abramo Rosales, co-director with SEED Winnipeg — a non-profit that helps low-income entrepreneurs — says some small businesses she works with have struggled to create an online presence through social media and e-commerce.

Adding further to the barriers small businesses face, many are unsure what support programs they qualify for, how to navigate them, and how to access grants that might help them through the pandemic.

"It's extremely hard, particularly for small businesses. Often they're just one person or a small family business operating on really tight margins, not knowing where to get information or how to access support services," she said.

That's why she's encouraging Manitobans to spend money at local businesses this season.

"Supporting local isn't a new concept, but now more than ever, it is so important and vital so that Manitoba's economy can rebound and recover," said D'Abramo Rosales.

The mother-daughter team at Riley Grae they say creating an online presence has been a lot of extra work during a time when they are delivering products, liquidating items, paying bills and applying for government grants.

"We have to be able to present ourselves online," said Trish Wittmann. "But I can't see this season being as profitable as it would be if it was, of course, any other normal circumstance."

The small business is disappointed that they didn't qualify for more government support, including a now-ended rent subsidy program.

Now, they're trying to make money this holiday season to pay back rent from past months.

They hope that they can qualify for the province's recently announced $5,000 bridge grant, which is meant to support small and medium-size businesses that were ordered to close their doors.

The shop owners say they are grateful for any help they can receive, but the small grant won't be enough to cover a fifth of what they expected to make during the busiest time of year.

For Lauren Wittmann, the shop is a dream come true. She works hard to make personal connections with her customers, including hand-written notes with every purchase, and often personally delivering orders herself.

She hopes people will support her family business, but she understands that not everyone has the financial means.

That's why she says people can always show their support for local business owners by sharing and promoting on social media.

For now, the shop owners are hopeful that those who are buying local will increase sales enough to support them through the January and February months, which are typically the slowest for local shops and restaurants.

"Any little bit helps," said Lauren Wittmann. "Without these months of sales for many businesses, we're not going to be able to afford to stay open if it keeps up."