The province apologized to indigenous families caught in the Sixties Scoop Thursday, leaving many in attendance at the Manitoba Legislature announcement moved to tears.

'I cry myself to sleep every night for all these things that I've lost,' says Kinzie Halcrow 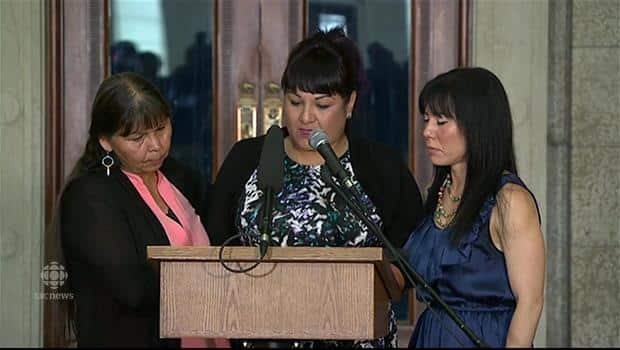 Sixties Scoop: 'Lots needs to be done to help resolve this legacy'

5 years ago
4:22
The province apologized to indigenous families caught in the Sixties Scoop today, leaving many in attendance at the Manitoba Legislature announcement moved to tears. 4:22

The province apologized to indigenous families caught in the Sixties Scoop Thursday, leaving many in attendance at the Manitoba Legislature announcement moved to tears.

Manitoba became the only province in Canada to formally apologize for the Scoop, a move that saw an estimated 20,000 native children forced into adoption by child-welfare services and placed with mostly white families between the 1960s and 1980s.

​"We really deserve to be heard, understood and recognized for everything we have lost, and we have lost a lot," Colleen Rajotte, a Scoop survivor, told the crowd at the Legislative Building.

"I know the feeling ... of being ashamed as a young person not knowing anything about my culture, and the huge emotional upheaval when you search out and try to reconnect with your birth family. It affects everything in your life," said Rajotte, adding many survivors now suffer from post-traumatic stress disorder.

"But I know that it is also going to bring about more recognition and understanding to the Sixties Scoop."

Adoptees were taken to other provinces, overseas, and to the U.S. Kinzie Halcrow was taken from his family when he was 3½ years old and adopted by a family in Texas less than three years later.

"It was ugly and I lost everything," said Halcrow, adding he and his sisters were routinely abused by foster parents.

"My culture, my traditions, my spirit, my heart, my soul, my family; who is going to bring all that back?" he said.

"No one, so I have to learn how to deal with it and live with it ... so I cry myself to sleep every night for all these things that I've lost."

"This experience has taken away my identity as an aboriginal woman," said Marlene Orgeron, another survivor.

"Because of the Sixties Scoop, family to me was just a word to describe people I shared the same blood with," she said. "The connection was lost."

Orgeron was sent to New Orleans after her parents were killed. She said she's spent the last twenty years trying to piece together her past and heal.

"Each day I strive for peace within myself to soothe the current of pain," said Orgeron. "This is a good start to acknowledging the past, recognizing the damage and hurt that has been done."

"We need answers and we don't have them. Like, why did you do it, for one?" David Chartrand, another survivor, said following the apology.

"You have defeated us. You have conquered us Sixties Scoop kids. We cannot speak our language, we don't know what the drum is for .... We can't even talk to our mothers," said Chartrand.

It took him 32 years to get in touch with his birth family, Chartrand said. All of his relatives had since passed away, save for his brother, by the time he found them.

"Probably I just came back to bury them," he said.

Stewart Garnett was born in Winnipeg and is from Long Plain First Nation, but he grew up in California after being adopted by a white family during the Scoop.

Garnett said he struggled with questions of identity growing up and was frequently confused by the way people would label him.

He returned to Manitoba about a week ago in attempt to regain a sense of his culture.

"It's been rough. I see people who do know who they are and they're comfortable in their own skin, but me, no," he said.