A historic Manitoba riverboat went up in flames early Tuesday morning while moored in Selkirk, Man.

A historic Manitoba riverboat went up in flames early Tuesday morning while moored in Selkirk, Man.

Shortly after midnight, Selkirk's volunteer fire department responded to a report of a fire on the Paddlewheel Princess, a 50-year-old riverboat that formerly sailed Manitoba rivers that has sat in a slough in Selkirk since 2013.

Selkirk Fire Chief Craig Fiebelkorn said the fire, which RCMP are investigating, was suspicious and took crews two hours to put out because they had to work from the safety of the shore.

The fire is the fourth that is suspicious in nature in recent days in Selkirk, Fiebelkorn said.

The chief said the suspicious fires started last Saturday when a house went up in flames. On Monday evening a truck in a scrap yard was set on fire. Tuesday night there was a fire at a concession stand fire as well as the boat.

"There was nothing other than a malicious act [that] could start the boat on fire. There was no electricity going to it. There was no lightning storm that night or [anything]," Fiebelkorn said.

"It's just a process of deduction, someone probably fooling around."

The fire commissioner agreed, Fiebelkorn said, and is now investigating. 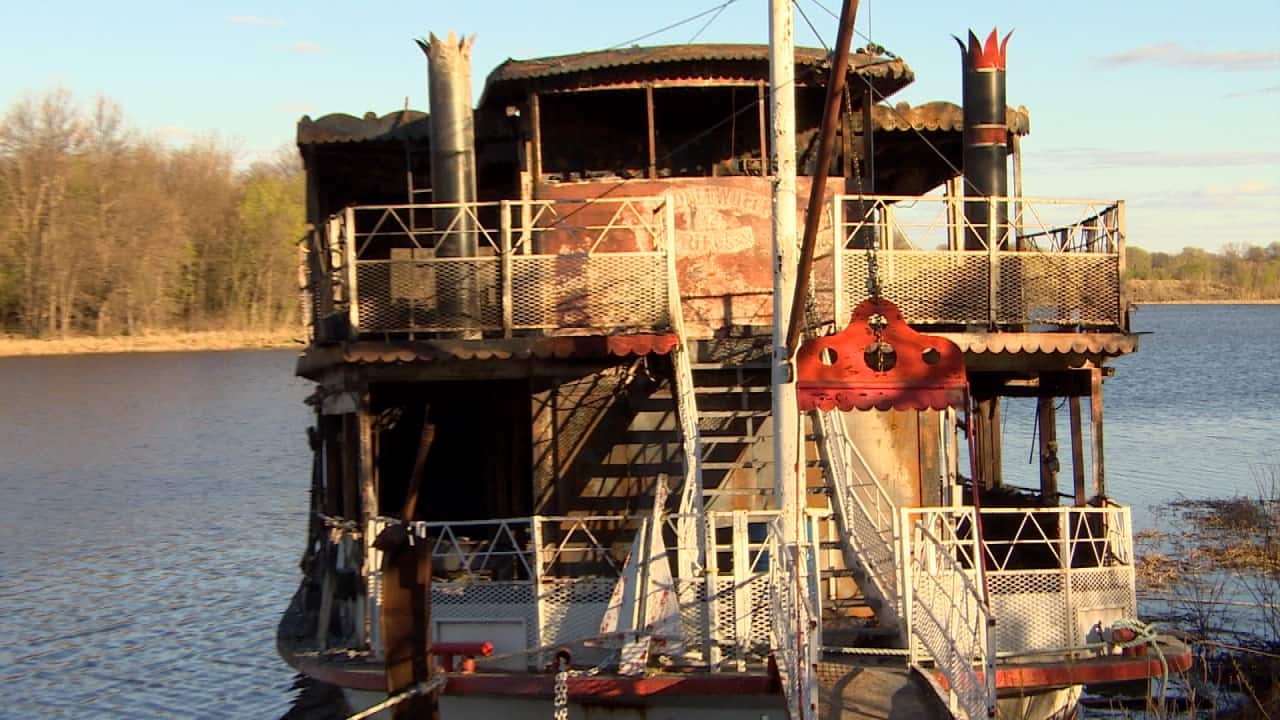 4 years agoVideo
1:26
A historic Manitoba riverboat went up in flames early Tuesday morning while moored in Selkirk, Man. Shortly after midnight, Selkirk's volunteer fire department responded to a report of a fire on the Paddlewheel Princess, a 50-year-old riverboat that formerly sailed Manitoba rivers that has sat in a slough in Selkirk since 2013. 1:26

Fiebelkorn said even before he arrived at the slough to fight the fire, he could see the glow of the blaze from the highway.

"Epic proportions," he said. "It was huge. It was blowing out the side of the thing, it was coming out the top. Fully engulfed would be the best way to describe it."

More than 30,000 litres of water later, the fire was put out, leaving only the metal behind, Fiebelkorn said.

"Steel, the hull, the framework, the stacks in the front, the captain's house in the front — anything that's metal survived, it twisted and bowed," he said. "But anything that was wood or fabric is all gone."

Fiebelkorn called the fire a "sad moment for Manitoba."

"The [Paddlewheel] Queen and the Princess have been around for a long, long time," he said. "I know I've been on them. I spent my high school grad on one of them, you know? A lot of people have been through it and enjoyed the waterways around here."

​Mayor Larry Johansson said he noticed the damage Wednesday morning while looking over the park next to the slough where the Paddlewheel Princess was moored.

"It's not good," he said. "I don't know what the owners are saying about it, but like I say, it's a tough one and it's a shame to see it happen."

Fiebelkorn said it's been an unusually busy few days for the Selkirk fire department and the blaze on the boat isn't the only suspicious fire this week.

The Paddlewheel Princess was constructed in 1966, a year after Winnipegger Ray Senft built its sister ship, the Paddlewheel Queen.

Former captain Steve Hawchuk took the boat up and down Manitoba rivers until 2011, when he docked the boat and put it up for sale. He continued to sail the Queen until 2013.

Hawchuk was unable to find a buyer for the boat the first time around, but listed it again in March 2016.