Mandatory third-party new home warranties are coming to Manitoba, but some question how well they will protect consumers. 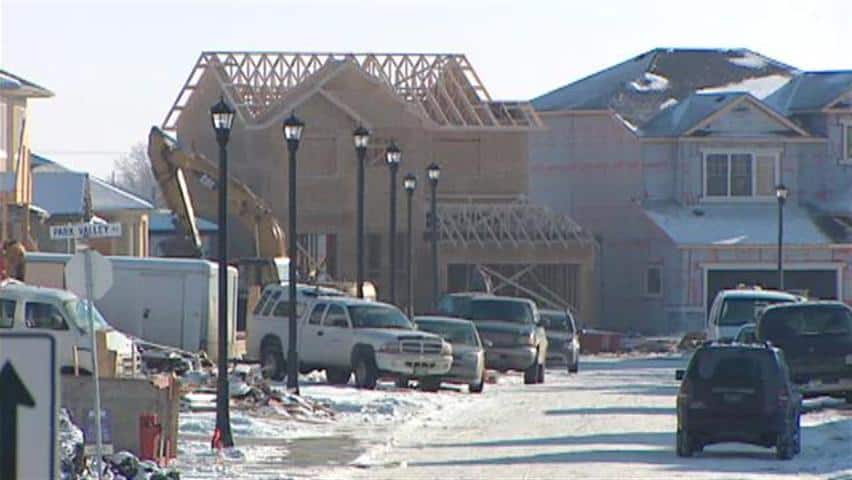 8 years agoVideo
2:32
Manitoba government is proposing a bill that would make third-party new home warranties mandatory, but some question how well the legislation would protect consumers. 2:32

Mandatory third-party new home warranties are coming to Manitoba, but some question how well they will protect consumers.

The provincial government introduced its new home warranty act last November, which, if passed, will require a warranty for each new home before a building permit can be issued.

In public consultations, the province received comments from 40 homeowners. Of those, 21 said they had experienced construction-related problems with new homes.

A summary provided by the province details the complaints, including:

Last fall, CBC News reported on new home buyers having trouble getting builders and warranty companies to cover problems with roofs and shingles.

Jim and Heidi Schadek, who had their home built in Headingley, Man., felt let down by both of their builders. One builder failed to enrol them into the New Home Warranty Program, even though it was part of the contract.

The Schadeks question if warranties are the answer.

"I think the Consumer Protection Act should protect the consumer, not give that responsibility to a third-party warranty company," said Jim Schadek.

Warranties should be detailed, says builder

Trevor Markevich, president and owner of Mannington Custom Homes, says he supports a move by the Manitoba government to make new home warranties a requirement.

"The only problem with that is they cover very minimal things. It's really not stipulated very clear as to what they cover," Markevich told CBC News.

"A lot of people are under the impression that the warranty is useless and doesn't really do anything, because they've put claims in and most of the claims that have been put in have been denied for whatever reason," he added.

Markevich said there are a lot of vague and unwritten issues in the warranties currently.

"It should be very detailed — as detailed as possible. If it's in black and white, if it's in writing, it's clear to everybody," he said.

However, Markevich said his company, which has been in business since 1993, has had a different experience: only one warranty claim against it.

He said the problem in that case wasn't the fault of his company, and the claim was honoured by the warranty company.

Manitoba Home Builders' Association (MHBA) president Mike Moore says most problems that arise are corrected by the builders, without a third-party warranty.

"When there is a problem, it tends to be a breakdown of communication. Where effective communication has stopped and I get a complaint, I immediately get the builder to interact with the consumer and open up those lines of communication again," Moore said.

He pointed out that MHBA member builders are already required to offer warranties as a condition of membership, which means 85 per cent of new homes in Manitoba currently come with a warranty.

Moore said the proposed law will even the playing field with non-MHBA members who may not currently offer third-party warranties.

"From a home builder's perspective, they feel that a mandatory third-party warranty is the right thing to do -- both for the protection of the builder and the consumer," he said.

Manitoba to join 4 other provinces

"If you buy a toaster, you can get a warranty," said Consumer Affairs Minister Jim Rondeau. "It's nice to see that people can now get a warranty for the biggest purchase they'll ever do."

While Manitoba is going ahead with the legislation, the government couldn't say how often warranty providers are paying out claims. Neither could the home builders' association.

CBC News requested that information from Aviva Canada, the insurer for the National Home Warranty.

Aviva declined to provide the statistics, even though it gives the same information to regulators in B.C.

Figures publicly available from the B.C. Homeowner Protection Office show that in 2012, there were 3,640 claims received involving all warranty providers in that province.

There were 1,893 claims covered, 1,209 not covered, 1,322 resolved by the builder, and another 363 found to be valid but the warranty company cannot get the problems rectified by the builder. A few dozen B.C. cases went either to mediation or to court in 2012.

Statistics on warranty claims for Ontario and Quebec are also publicly available.

The Tarion Warranty Corp., which is the mandatory new home warranty provider in Ontario, had 1,380 cases go to conciliation in 2012.

If a case goes to conciliation, Tarion makes the name of that builder publicly available on its website, providing an incentive for builders to resolve problems without proceeding to a claim.

The following documents are: