Residential school survivor Merle Scatch reunited with her former teacher, Verna Kirkness last week after having not seen each other for 50 years.

'You were 1 of the best teachers I had,' Merle Scatch says of Verna Kirkness 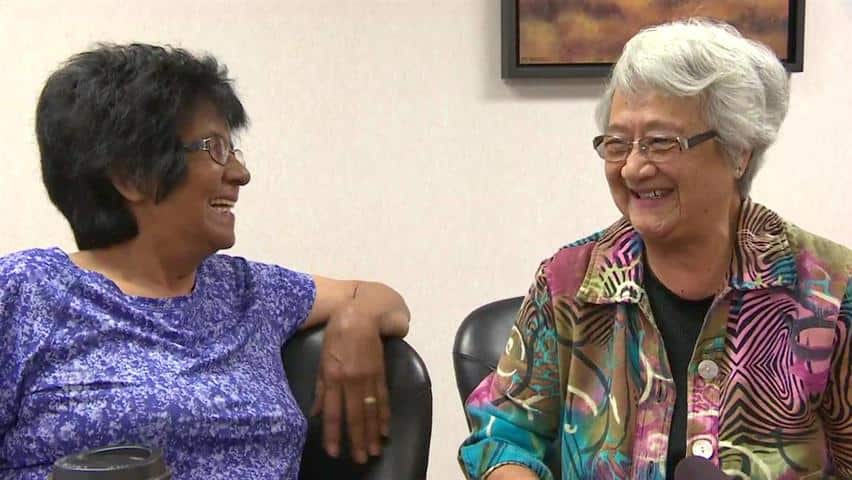 5 years ago
2:20
Reunited after 50 years: Merle Scatch, a residential school survivor, and Verna Kirkness, one of Scatch's former teachers 2:20

It was a simple Cree greeting between a former student and her teacher, but it packed an emotional punch, unleashing decades of haunting memories and healing tears. Such was the impact of the salutation that reunited Merle Scatch, a residential school survivor, and Verna Kirkness, one of Scatch's former teachers.

"I feel emotional, because you were caring," Scatch told Kirkness at this month's reunion. "I hate going back to my past but you were always there. You were one of the best teachers I had in that residential school."

Scatch, from Cross Lake First Nation, spent most of her childhood years at a Norway House residential school and most of them were, by her own account, horrible. Most often, she said, she makes an effort never to talk about it, let alone recall it.

I felt kindness in that smile. The day I got to know her, everything changed for me, that there are some kind people in the world.- Merle Scatch

The memories are all too painful; like those of the ongoing sexual assaults, where the resident doctor would repeatedly "touch me where you are not supposed to." And the ongoing beatings with a thick leather belt, administered as punishment for everything from eating food without permission to crying out loud (because the beatings hurt so badly).

But the ultimate crime was to speak Cree in the classrooms.

"Speaking Cree, we got the strap," Scatch said. "That strap made my hands and fingers purple and swollen. Sometimes, I had a hard time to do writing because I couldn't even bend my fingers."

It was for that reason that Scatch automatically stiffened in fear one morning in seventh grade, when she realized she'd been busted speaking Cree to her classmate. The teacher, new to the school, approached Scatch and bent over. But instead of a strapping, she gave them a smile. And even more startling to the girls, this new teacher also spoke Cree.

"I was just shocked," Scatch said. "And her smile. I felt kindness in that smile. The day I got to know her, everything changed for me, that there are some kind people in the world."

Kirkness, meanwhile, went onto become a nationwide advocate for indigenous youth who want to pursue higher education. But she remembered those days as a residential school teacher and she remembered Merle Scatch.

So when the two finally reconnected last week, it was a reunion of tears, laughter and their native language.

"As a teacher, you don't know what effect you're having on the students and I'm here in tears," Kirkness said to Scatch. "I grew up knowing my language and I certainly had no intention of stopping anyone from talking Cree. I loved my language, you know? And if they were talking Cree that was just fine."

Kirkness also said she wishes she'd known then, as a naive new teacher, about the abuses silently going on behind her back, in other classrooms and dorms.

"It is sad to hear,"  Kirkness told CBC News. "Sometimes we weren't aware of everything that went on in the dorms. If some of us, native teachers especially, [made] a difference, I'm happy to hear [that]."

It was at that moment that both teacher and student began to cry again. And laugh. And speak Cree. And as they made plans to meet in person this weekend, Scatch reiterated the impact of that tender moment in an otherwise turbulent time.

"Miss Verna Kirkness is what we called her then and she still is today," Scatch said.

"I learned from her that education is important, and I encourage my own grandchildren to continue their education and never to lose their Cree."