Family members of missing and murdered Indigenous women and girls in Manitoba reacted with a mix of hope and skepticism as the national inquiry released its final recommendations.

Family members of missing and murdered Indigenous women and girls in Manitoba reacted with a mix of hope and skepticism as the national inquiry released its final recommendations.

"We've seen other reports come out regarding what Indigenous people are experiencing in Canada and the reports have collected dust," said Hilda Anderson-Pyrz, whose sister Dawn Anderson was found frozen to death in Leaf Rapids, Man. in November 2011. Her family's experience with investigators was not positive, said Anderson-Pyrz.

"I felt that they treated my sister's death like she was just another dead Indian and that her life did not matter," she said.

Police ruled her death was not suspicious, but Anderson's family testified at hearings for the inquiry in Thompson that her body was covered in bruises when it was found. The report contains numerous recommendations for police to follow, and Anderson-Pyrz wants to see those acted upon immediately.

"We shouldn't be treated like we're second-class when we're trying to seek justice in Canada," she said.

Manitoba provincial politician Bernadette Smith, whose sister has been missing for more than a decade, had mixed emotions as the National Inquiry into Missing and Murdered Indigenous Women and Girls released its final report.

Her family didn't take part in the years-long inquiry, but she feels the report makes some important recommendations.

"I went to the hearing that was here in Manitoba and I saw families left broken," the NDP MLA for Point Douglas said Monday. "We just saw the, you know, lack of tools that the commissioners were given. The rush job — families were rushed through their testimony."

Smith, a vocal advocate for missing and murdered Indigenous women and girls who was elected to the Manitoba Legislature in a 2017 byelection, is a critic of the inquiry who still hopes its recommendations are implemented.

Her sister Claudette was 21 when she went missing July 24, 2008. Her family wears T-shirts with Claudette on them "just as a reminder to people … that she's still missing," Smith told Marcy Markusa, host of CBC Manitoba's morning radio show Information Radio.

Governments should focus on the inquiry recommendations that can be implemented immediately, as well as those that match recommendations in previous reports, such as the Aboriginal Justice Inquiry, she said.

Smith criticized the lack of a "families-first approach" in the way the inquiry was led; families who spoke at the hearings didn't receive adequate support, she said.

Inquiry commissioners travelled the country for three years, visiting dozens of communities and hearing testimony from more than 2,000 Canadians.

The final 1,200-page, including 231 "calls for justice," report was released in Gatineau, Que., on Monday during a ceremony that included a speech by Prime Minister Justin Trudeau.

Thelma Favel of Sagkeeng First Nation in Manitoba, great-aunt and guardian of Tina Fontaine, stood next to Assembly of First Nations Grand Chief Perry Bellegarde during the ceremony.

The discovery of Fontaine's body in the Red River in Winnipeg in 2014, when the girl was just 15, catalyzed demands for a national inquiry.

"She can feel her energy, her spirit is here," Bellegarde said on behalf of Favel, who was too emotional to speak.

Favel also wanted Bellegarde to say she wants safe shelters and support services for young people to be available 24 hours a day, seven days a week, he said.

"The doors were shut on Tina." 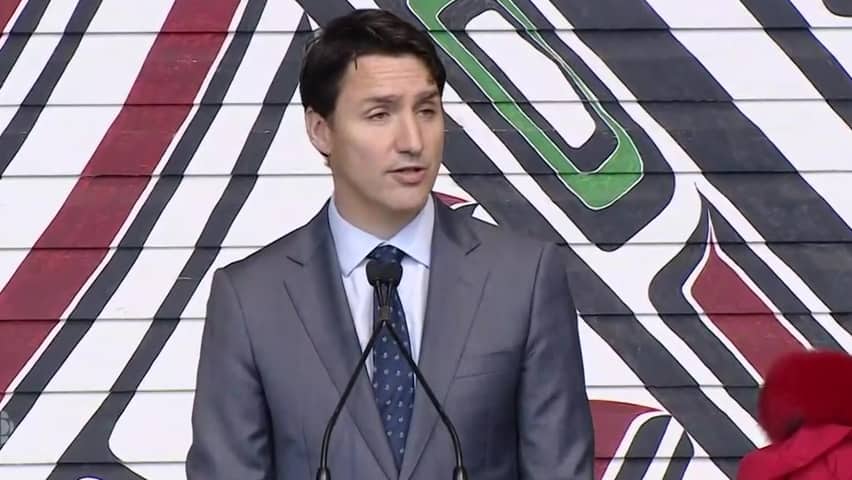 1 year ago
1:02
PM Justin Trudeau promises to work with Indigenous partners and turn the inquiry’s Calls for Justice into real, meaningful, Indigenous-led action. 1:02

Smith agrees with some of the recommendations in the commissioner's report — such as the call for a national action plan — but she said the $92-million cost of the inquiry would likely have been better spent on initiatives that would have kept women safe.

She hopes the report's recommendations won't simply "sit on a shelf," like so many other previous studies, she said.

Without the advocacy of grassroots organizations and families, particularly in Manitoba, Canadians would not be having this conversation today, said Arlen Dumas, Grand Chief of the Assembly of Manitoba Chiefs.

"I believe that Manitoba will continue to be the leader in different regards, and that we will continue to push forward and we will insist that this is not going to be a report that will collect dust on shelves," he said.

Dumas acknowledged actions taken by the Manitoba government to address historical harms suffered by Indigenous communities, such as the release of a Clean Environment Commission report that described the impacts on northern Manitoba First Nations caused by the influx of thousands of Manitoba Hydro workers over the last several decades.

The provincial government took a proactive approach in its efforts to improve relations with Indigenous communities after the announcement of the inquiry, including reforms to the justice, health care, and child and family services systems, said Manitoba Indigenous and Crown Relations Minister Eileen Clarke.

"As a government, we recognize that we need to collaborate with our chiefs, with our councils, with our communities. And we've laid that foundation," she said.

Smith's experience with police following her sister's disappearance reflects a wider problem facing families of missing and murdered Indigenous women across the country, she said.

It took 10 days for police to start investigating, she said.

"Families really need to know that their cases are being taken seriously and that they're being investigated, and that they're not being glossed over. And that families aren't being told, 'Well, maybe they're out there partying somewhere,' or 'They'll just turn up.' "

The report calls for sweeping reforms to the justice system, saying federal funds should be used to bolster the ranks of Indigenous police forces and to hire more Indigenous judges, justices of the peace and police officers.

Winnipeg Police Service Chief Danny Smyth admits there is room for improvement, but said investigators face many challenges. People come to the city from remote communities for many reasons, including health care, work, and to go to school, he said.

"Certainly, there were people that fell through the cracks here," he said.

Anderson-Pyrz, who also works as manager of the murdered and missing Indigenous women and girls liaison unit for Manitoba Keewatinowi Okimakanak, would like to see an Indigenous police force, which is one of the recommendations in the final report.

"I'm not entirely satisfied in the Winnipeg Police's handling of cases, there's still some challenges and barriers there, but they are trying to do better," she said.

When it comes to training, 80 per cent of the service has been trained on Indigenous issues, said Smyth. The Winnipeg Police Service is aiming to hire more Indigenous officers and continue working with groups in the community to foster a better relationship, he said.

The report also calls on provincial and territorial governments to improve the restraining order system by making them "available, accessible, promptly issued and effectively serviced and resourced" — to help Indigenous women stay out of harm's way when faced with violent partners.

The inquiry recommendations also call for guaranteed access to financial support, legislated paid leave and disability benefits and "appropriate trauma care" for Indigenous victims of crime or other traumatic events.

Smith called Manitoba "Ground Zero" for the problem in Canada, noting that Sagkeeng has a higher number of missing and murdered Indigenous women and girls than any other community in the country.

"Something has to be done and it's up to the governments, but it's also up to us as a society to start shifting the way we act and treat each other," she said.

With files from Aviva Jacob and Ahmar Khan