'One of the steps towards reconciliation': Manitoba RCMP to allow sworn statements using eagle feathers

In what is being hailed as a step forward in reconciliation between the RCMP and Indigenous communities, RCMP in Manitoba will now allow the use of eagle feathers for making sworn oaths.

Victims, witnesses, officers will now have option of swearing in using Bible, affirmation or eagle feather

In what is being hailed as a step forward in reconciliation between the RCMP and Indigenous communities, RCMP in Manitoba will now allow the use of eagle feathers for making sworn oaths.

The announcement came on Tuesday afternoon, during a special ceremony at the RCMP detachment in Winnipeg to cleanse the eagle feathers that will be used for swearing in victims, witnesses, suspects and police officers when they give statements.

The feathers — considered an important spiritual symbol in many First Nations cultures — can now be used in the way Bibles or affirmations are already used.

Sworn statements made using a Bible, affirmation — or now, an eagle feather — are considered admissible evidence that can be used in court. Police officers will also now be able to use the eagle feather to swear information before the court.

"I think it's going to have a big impact on our people," he said. "When people swear on the Bible, given what happened between the churches and residential schools, there is a traumatic affect in our communities even today.

"This is one of the steps towards reconciliation and bridging the gap."

Feathers will be distributed to the RCMP's more than 80 detachments across the province. In addition to being used for sworn statements, they will also be offered to provide comfort for anyone who wants them at the detachments, RCMP said in a Tuesday media release.

The feathers were harvested from two eagles and gifted to the RCMP by the wildlife branch of the province's Sustainable Development department.

With Manitoba now joining Nova Scotia — the first province in Canada where RCMP incorporated the use of eagle feathers in police activities — Hart said he hopes the initiative will extend across the country.

It's really a positive step in our reconciliation with our Indigenous communities.- Assistant Commissioner Scott  Kolody , Manitoba  RCMP's  commanding officer

"I think it's important … for all our RCMP divisions and attachments to undertake this," he said.

"It's really a positive step in our reconciliation with our Indigenous communities."

Kolody acknowledges the relationship between police and Indigenous communities across the country has often been fraught.

"It's important stuff that we gain the trust and respect [of Indigenous people], and we feel that this is really important stuff for us to bring that into our day-to-day operations as we move forward."

Kolody believes the introduction of the use of eagle feathers is a step toward improving relations between police and Indigenous people.

"It's a positive step for us, but we've learned a lot along this journey and working with our elders and Indigenous communities on the importance of this," he said.

"It's great to see this as part of reconciliation being done, [and] that the RCMP are involving our elders as well as respecting … protocols," he said.

"[It's important] to see that they're using Indigenous and First Nation members of the RCMP to help with these very simple ceremonies and protocols along the way, too."

This is building the spirit and the strength within our communities.- Kevin Hart, Assembly of First Nations Manitoba regional chief

Hart says the faith shown by Manitoba RCMP in making this move bodes well for the future.

"This is building the spirit and the strength within our communities." 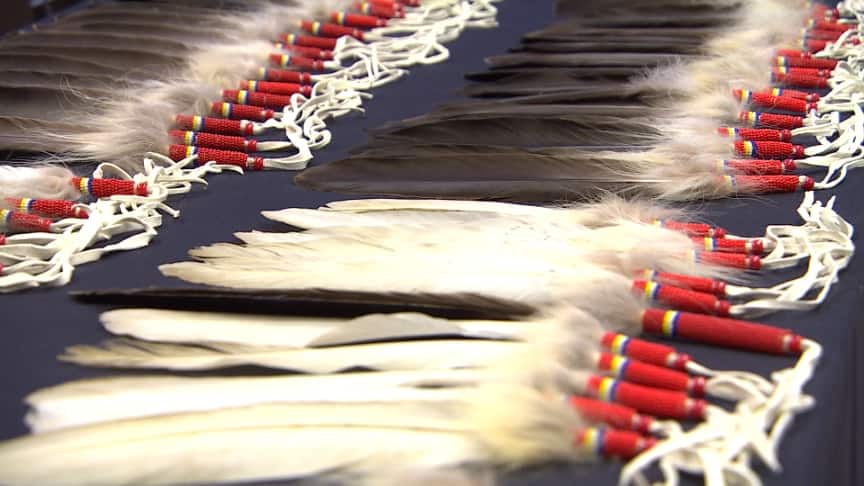 RCMP in Manitoba will now allow the use of eagle feathers for making sworn oaths.