Some Manitoba pharmacists are calling on the provincial and federal governments to tighten up rules around the sale of Tylenol No. 1 in Manitoba.

Manitoba pharmacists calling for more regulations of Tylenol 1, citing abuse of the drug 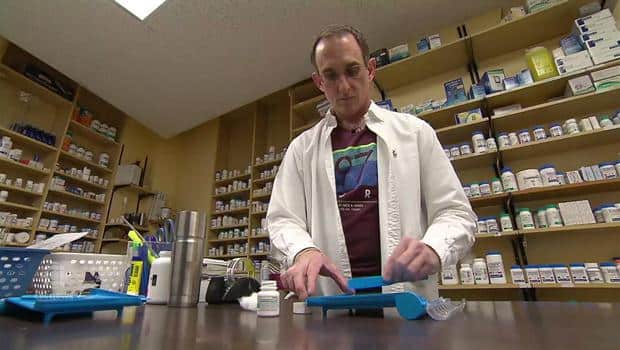 6 years ago
2:41
Some Manitoba pharmacists are calling on the provincial and federal governments to tighten up rules around the sale of Tylenol No. 1 in Manitoba. 2:41

Some Manitoba pharmacists are calling on the provincial and federal governments to tighten up rules around the sale of Tylenol No. 1 in Manitoba.

Many already limit the amount of the drug they will sell, informally track the amount sold to an individual, ask for identification or choose not to sell the drug at all because of fears about patient safety and addictions.

"Lots of our patients have drug addictions," said Jordan Charles, manager of Winnipeg's Main Street Pharmacy, which is connected to a methadone clinic. He chose not to sell Tylenol 1s when he came to the North End over two years ago because he was tired of confronting patients about their drug use.

"I didn't want to have to battle with people's addictions," he said. "Dealing with people coming in here searching out codeine based products."

He said in his previous practice he saw people coming in every couple of days looking for bottles of 200 tablets.

"It's a cheap, dangerous high," he said, "It's a gateway drug. It's a starting point. They are going to go to higher prescription products,"

Charles said he's also witnessed users combining the pills with anti-nausea drugs for a high that is similar to being drunk.

"It's a slow trap that unfortunately these people fall into," he said. "It's amazingly destructive and unrecognized."

"There's a ton of misuse, It's a crutch for people in opioid withdrawal," said Mark Barnes, a pharmacist who works with the treatment team at the Canadian Centre for Substance Abuse. "It's not that the codeine is harmful...It's the amount of Tylenol that a person consumes in order to access eight mg of codeine that is super scary."

Barnes said users can go into liver failure but that is usually the last thing addicts are worried about.

"You want that pain to stop...preventing withdrawal is their prime concern. They will consume vast amounts of over-the-counter codeine products to prevent withdrawal at the detriment of their own personal health." he said.

He's calling on governments to restrict the sale of the drug and support pharmacists who are 'gatekeeping' the Tylenol No. 1 problem in Canada.

The painkiller is currently classed an 'exempted codeine preparations' subject to conditions under federal narcotic control regulations which stipulate the codeine be limited to eight mg. It has to be combined with at least two other non-narcotic ingredients and be properly labelled. Pharmacists are directed under the regulations to refuse sales when there are "reasonable grounds" to believe it will be misused.

The College of Pharmacists of Manitoba also obliges pharmacists to provide counselling when the drugs are dispensed and ask questions about patient use, history and other prescriptions that can interact with the drug. They can also refuse to sell it.

"It's really a safety issue," said Susan Lessard-Friesen, Deputy Registrar of the College. "It can very easily happen that a patient can run into a problem with overdosing,"

She said that pharmacists are using their professional judgment on what is safe for patients.

"We are looking at ways that we can standardized the way that pharmacists monitor the use and selling the products from their pharmacy and amongst pharmacies."

"The college will be supportive of any system that the pharmacy puts into place in order to help monitor or identify a problem or a hazard to the health of the community,"

Some Winnipeg pharmacists say people will simply goes elsewhere, if they are refused.

"The problem is it's available elsewhere,"said pharmacist, Veda Brakash Bangalore.  "If I refuse they go elsewhere."

"Prescription is a lot better because there will be better control of things," he added.

It's not known how many people abuse Tylenol No.1 as that information isn't tracked in Canada. It requires a prescription in the United States and other countries.

Some Winnipeg pharmacists are tracking patients informally but Barnes said that monitoring could be done by all Manitoba pharmacists fairly easily.

"It's a very simple process," he said. "You record the sale by simply linking it to a narcotic database. Every province has one."

Charles said though Tylenol 1 is a good painkiller when used properly, pharmacists need the backing of government to protect patients.

"The government needs to step in and help on this," he said.

A statement from the office of Manitoba's health minister, Sharon Blady, said patients should always consult with healthcare providers to address safety concerns.

"Health Canada is the lead on medication categorization, and has classified Tylenol 1 as an over the counter product, which means no prescription is needed in order to purchase the medication.  The provincial government does not have a direct role in the designation process, " the statement said.

"Through the Controlled Substances Act, Health Canada regulates anything with codeine (including T-1s). The National Association of Pharmacy Regulatory Authorities makes recommendations for the designation of drugs for sale, including over-the-counter drugs. This organization makes recommendations to the regulatory bodies (colleges) in each province and territory."

"All health products are approved by Health Canada based on a review of safety, effectiveness and quality. The products are authorized to be used for the conditions described on the label by the intended user group. Combination products containing codeine are stored behind the counter in pharmacies," Health Canada told CBC News in a statement emailed on Friday.

"It is also worth noting that the appropriate use of medication is a shared responsibility between the federal government, provincial/territorial governments, health care professionals and patients."

The department states that it "continually monitors for evidence of abuse and public health risks posed by a number of substances to assess whether additional controls are warranted.

"If at any time during the monitoring of the most current evidence that a new risk to health is identified by Health Canada, appropriate action will be taken to help protect the health and safety of Canadians."