The Manitoba NDP has rolled out its first television ad ahead of the provincial election.

'We haven't always gotten it right, but I always make decisions with your best interest in mind' 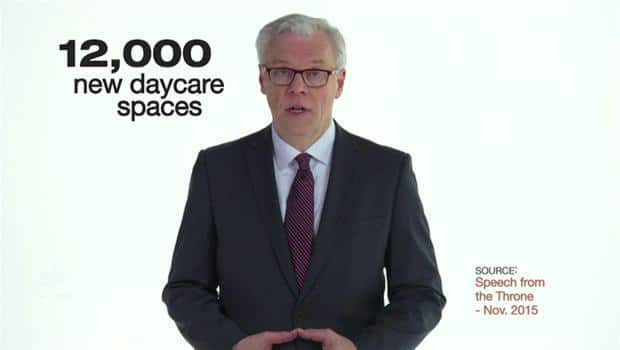 5 years ago
1:04
The Manitoba NDP has rolled out its first television ad ahead of the provincial election. 1:04

The Manitoba NDP has rolled out its first television ad ahead of the provincial election.

Selinger highlights the party's accomplishments, and notes though it has made mistakes, his government has always had Manitobans' "best interest in mind."

"It's been a tough year. Now, we haven't always gotten it right, but I always make decisions with your best interest in mind," Selinger says at the beginning of the ad.

"Together, we've weathered two major floods and a global recession and still have one of Canada's lowest unemployment rates."

Selinger goes on to champion the party's track record on health care and daycare services; how it has helped reduce wait times and plans to add 12,000 childcare spaces across the province.

Selinger told CBC News the ad is simply meant as a positive and open gesture to Manitobans ahead of the spring election.

While Selinger falls short of providing a full apology for some of the party's shortcomings in the ad, Thomas said the premier's show of humility was a wise move.

"To ignore some of the furore and upheaval that went on over his leadership would have been a bit disingenuous. This is in some ways a sound approach," Thomas said.

"I think Manitobans will decide on the degree of sincerity involved in Greg Selinger's … contrition on his mistakes over the past few years," he said.

Pallister called the reference Selinger makes to putting money in the pockets of Manitobans "humorous."

"That was a promise he made in the last election campaign, and over the last few years he's spent most of his time with his hands in the pockets of Manitobans, to the tune of about $5,000," he said.

"In the average household, [he took] money out."

The New Democrats said the ad will begin running on cable television soon.

Manitobans head to the polls April 19.