Manitoba's government MLAs have agreed to freeze their wages until the next election — a move that was followed soon after by opposition politicians, albeit for different reasons. 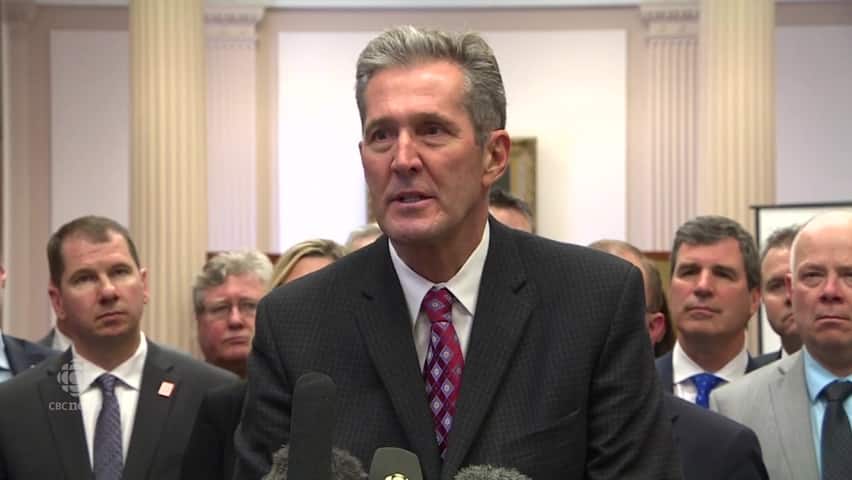 4 years agoVideo
1:49
Manitoba's Progressive Conservative MLAs have agreed to freeze their wages until the next election — a move that was followed soon after by opposition politicians. 1:49

Manitoba's Progressive Conservative MLAs have agreed to freeze their wages until the next election — a move that was followed soon after by opposition politicians, albeit for different reasons.

It started when Premier Brian Pallister announced salary freezes for 39 PC MLAs at the start of the spring legislative session on Wednesday afternoon.

The move comes as the Tory government plans to curb the growth in public-sector salaries, although Pallister has refused so far to reveal details.

Pallister says his caucus is signalling that everyone, including government politicians, has to play a part in helping to fight the province's billion-dollar deficit.

"We are doing this because we believe it is important," he said, surrounded by members of his caucus.

Salaries for members of the Manitoba Legislative Assembly are determined by an independent commissioner who reviews MLA pay and benefits.

Each Progressive Conservative MLA will hand back that increase, in the form of a personal cheque to the provincial government for the amount "equivalent to the total increase they would be eligible to receive during the 2017-18 fiscal year under current regulations," the PC caucus said in a news release.

A total of more than $70,000 will be given back to the government by PC MLAs for this coming fiscal year, the party said.

Pallister said the wage freeze also applies to the extra salaries given to cabinet ministers and himself.

Shortly after the Tories announced their salary freezes, the opposition New Democrats announced during question period that their MLAs will not take a salary increase this year.

"If this government is going to attack workers and cut their wages and freeze their wages, we want to stand with them."

The three-member Liberal caucus also accepted a wage freeze, but said they're freezing their salaries to help fix Manitoba's finances, which they said were wrecked by the previous NDP government.

"We think that it is important to show some leadership and to provide an example to all Manitobans," said River Heights MLA Jon Gerrard.

"By taking a wage freeze for ourselves, we show that we have some concern for the overspending that happened during the NDP [government] and that we are now concerned about making sure that the budget moves closer to balance."

It is currently not known if House Speaker Myrna Driedger and ousted NDP MLA Mohinder Saran, who now sits as an Independent, will take salary freezes.

While Pallister would not say if he will legislate wage freezes for public-sector employees, he did say the province needs the help of front-line workers to tackle the province's debt.

"We're borrowing today $3 million more than we're bringing in with some of Canada's highest taxes. That's tough times," he said.

But the Manitoba Government and General Employees' Union has accused Pallister of threatening to impose wage freezes through legislation and roll back increases in agreements that have already been signed.

"Our members have already agreed, at the bargaining table, to two years of wage freezes to help with the deficit. They don't need any lectures on sacrifices to help the province's bottom line," MGEU president Michelle Gawronsky said in an emailed statement.

The union also noted that Pallister and his cabinet members have already received a pay increase before the wage freeze was announced.

"When this premier and his cabinet raised their own pay by 20 per cent last year, it cost taxpayers $190,000. Now they are giving back less than half of that ($70,000) and asking for a pat on the back? It's a bit rich, and a bit disingenuous to say the least," Gawronsky said.

Those wage increases were actually the result of a clause in provincial balanced-budget legislation, which allows for a year's grace period for incoming governments to avoid salary penalties and still run a deficit.

Interim NDP Leader Flor Marcelino blasted Pallister and his cabinet for accepting the salary increases — about $20,000 more this year for the premier and each minister, according to the NDP — and not returning that money.

"Our party actually walks the talk — our MLAs and cabinet took wage freezes for five years and reduced the salaries of the premier and each cabinet minister by 20 per cent. This government needs to stop attacking health-care and education and offer real solutions for families," Marcelino said in a statement.

But Pallister called Marcelino's argument a "false assertion," saying the NDP cabinet's wages were lower as a result of penalties imposed on them by the balanced-budget legislation for running deficits while in government.

"The previous administration doubled our debt in the last six or seven fiscal years, and they have penalties applied to their salaries as a consequence. It was one of the only remaining aspects of the Balanced Budget Taxpayer Protection Act that they applied; they exempted themselves from all others," he said.

"So it's not appropriate, I suppose, to respond to a false assertion, and I won't."

The former NDP government also took a voluntary wage freeze when it negotiated a freeze for civil servants.

The Canadian Union of Public Employees in Manitoba, which represents about 26,000 workers in the province, also criticized Pallister for keeping his previous wage increase — at the expense, it argued, of public services and employees.

"The cost of the premier's 2016 pay increase would cover an EA's wages in his hometown for a year. It's a slap in the face that the premier is telling workers, unionized or not, to tighten our belts."

Moist called on the government to meet the unions at the bargaining table and negotiate contracts that are fair to workers.