Canada's health minister says officials are looking into how two northern Manitoba men, Luke Monias and Norman Barkman, were switched at birth 40 years ago in a hospital that, at the time, was run by the federal government. 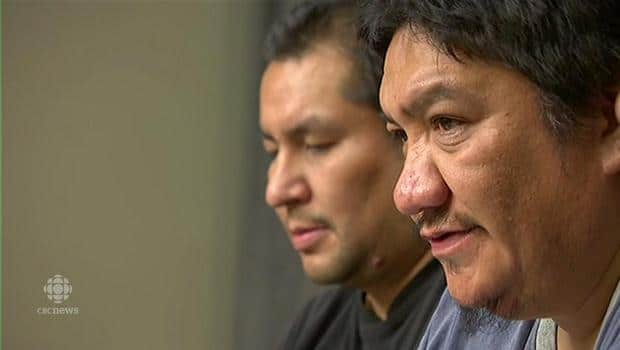 5 years ago
1:39
Luke Monias and Norman Barkman fought back tears on Friday as they spoke of trying to come to terms with the news that they were switched at birth. 1:39

Luke Monias and Norman Barkman fought back tears on Friday as they spoke of trying to come to terms with the news that they were switched at birth.

"It's hard. I just want to know what happened," a soft-spoken Barkman told a reporter-filled room at the Manitoba legislative building in Winnipeg.

They were joined by Eric Robinson, Manitoba's aboriginal and northern affairs minister, as they called upon the federal government to launch an investigation into how this could have happened.

1 of 0
"I would like some answers for me and my family," said Monias. "The good is that now I know the truth."

Canada's health minister says officials are looking into how two men were switched at birth 40 years ago in a northern Manitoba hospital that, at the time, was run by the federal government.

In a statement sent to CBC News late Friday afternoon, Health Minister Dr. Jane Philpott said she is "very concerned to learn of this issue."

"I have asked my department officials to look into the matter immediately and to reach out to the families involved," she said.

"I can assure Canadians that Health Canada will look into the concerns that have been raised by Mr. Barkman and Mr. Monias."

Grew up as close friends

"I've heard of a lot of stories in my lifetime, but I've never heard of anything like this occurring," he said.

"The mental, physical and the spiritual well-being of both men has been deeply affected by the loss of their proper identity, and the effects upon their immediate and extended families is just as serious."

Monias and Barkman were born on June 19, 1975, at the federally run Norway House Indian Hospital and grew up as close friends in Garden Hill First Nation, a northern fly-in community.

"I thought that it was a joke, rumours. I didn't take it seriously until recently," said Monias.

The test results came back on Nov. 10, confirming Monias and Barkman were somehow switched and each went home with the other's parents, Robinson said.

The healing process is now just beginning and it's going to take some time in order for that to take its course.- Eric Robinson

"I didn't believe it until I saw the paper [document] and that's when it hit me the most," said Barkman.

"It was shocking and unbelievable but all too true," Robinson added.

"Mr. Barkman and Mr. Monias are now calling on the federal government to initiate an investigation into the events surrounding this grievous error, and I support them in that endeavour. The lives of Luke, Norman and the families have been irreversibly torn apart by this error.

"The entire community of Garden Hill has been affected to a large degree by this — by whatever happened at the Indian hospital back in June of 1975."

Barkman's biological mother is deceased but Monias' biological mother, Rebecca Barkman, is alive and took part in the DNA tests, Robinson said, adding that Monias has children, whom he hasn't yet told.

The news is still fresh in their minds, even if the idea was in the back of their heads for a long time, Robinson said.

"The healing process is now just beginning and it's going to take some time in order for that to take its course."

Part of that healing will come with some recognition from the federal government, said Monias.

"I want an apology letter about the mistake that happened."

Chief Arnold Flett of the Garden Hill First Nation said he and community members are shocked to hear about what happened.

"It's unbelievable that something like that happened and that today that we know it's actually true," Flett said.

"To think of Norman and Luke, growing up in different families, and how do they adjust? That's probably the question that a lot of people in the community are thinking about. How do we move forward with this?"

When asked if he's worried there may be other cases, Flett said it was hard to say.

"If there is, at least we know what the outcome of this one is and also how others can deal with this issue," he said.

"I believe that up to this point, as families, they've grown to love each other as family. So you can't break that, but you just have to adjust to the new families that they have."

Robinson was asked if he was concerned about practices at the hospital, and if there is a possibility something could have happened to somebody else.

"I think that's what my friends from Garden Hill are indicating, and that's what they hope will be resolved from an investigation — that perhaps maybe we're going to open up another whole era," he said.

"You know, it's been one thing after another, whether it's residential schools, whether it's the [First Nations children] that were adopted out in the 1960s."

Robinson said he had difficulty sleeping last night, his mind spinning "and thinking about, you know, could this have happened to other people as well."

Robinson said he has already spoken to federal Indigenous and Northern Affairs Minister Carolyn Bennett "and she assured me that she would be co-operative in any activity that may occur with the federal government."