Liquor stores in this province are getting robbed hundreds of times a week, only months after Manitoba Liquor and Lotteries unveiled a strategy to reduce the incidence of theft.

Liquor stores in this province are getting robbed hundreds of times a week, only months after Manitoba Liquor and Lotteries unveiled a strategy to reduce the incidence of theft.

The provincial Crown corporation conceded Monday it is still trying to find ways to mitigate a robbery problem that primarily afflicts liquor marts in Winnipeg, several of which have been altered to improve security and staffed with armed security.

"We have police officers in our stores and they're robbing us while an armed officer with a gun and a Taser is standing there, so I'm not sure what is supposed to fix this," Liquor and Lotteries' corporate and public affairs director Andrea Kowal said Monday at a news conference.

In response to rising theft in 2018 and earlier this year, the corporation placed loss-prevention officers in stores during peak times, started checking customers' ID at the front door of Liquor Marts, using bottle locks and lockable shelf cases and started requiring customers to ask staff for high-value bottles.

Kowal said thefts continue to occur at a rate of hundreds per week. Liquor Marts in Winnipeg are robbed a total of 10 to 20 times a day, said Const. Jay Murray of the Winnipeg Police Service.

"It's almost like liquor has become a form of currency in the criminal underworld here in Winnipeg. It's certainly being shopped as such on social media platforms," Murray said.

As videos of people robbing liquor marts continue to spread on social media, Liquor and Lotteries is urging people not to try to be a hero when they see a crime in progress.

"No one's life or safety is worth a bottle," Kowal said. "It's just not worth it."

Winnipeg police issued a similar warning over the weekend asking customers not to take video of the thefts, either. Liquor and Lotteries operates state-of-the-art video systems and does not need anyone to use their iPhones to capture images of thefts, Murray said.

"It seems like every day another video is being shared on social media of someone intervening," he said, adding he understands customers are frustrated and wish to help.

"There's a feeling of trepidation when people walk into the store, and that's not how people want to go to work every day," said Janet Kehler, member services director of the Manitoba Government and General Employees' Union.

Kowal said there's no silver bullet to stop the problem, but she said they're still looking at more steps they can take to try to mitigate theft.

"We're not giving up," said Kowal. "Every time we put something in place, it works for a little while and then they figure out how to get around it."

She said she would not share what measures are and are not working because that would assist thieves.

Kowal said while liquor mart thefts have gotten a lot of attention in Winnipeg, the issue is much larger than what's happening in their stores.

"It's not going to be solved by law enforcement and security. This is a city-wide, maybe North America-wide problem that's going to involve groups that work with families, addictions groups, public health, social agencies," she said.

"If we closed the liquor marts — whether we closed them to make a Consumers Distributing model, or literally closed them and said, 'we're not gonna be in this business anymore' — this issue is still going to exist."

Consumers Distributing, a retail chain that closed in 1996, used a shopping model where customers browsed through a catalogue to select items and then an attendant retrieved the items from the warehouse.

Kowal said the thefts are taking a toll on liquor mart staff, and asked people to be empathetic to them. 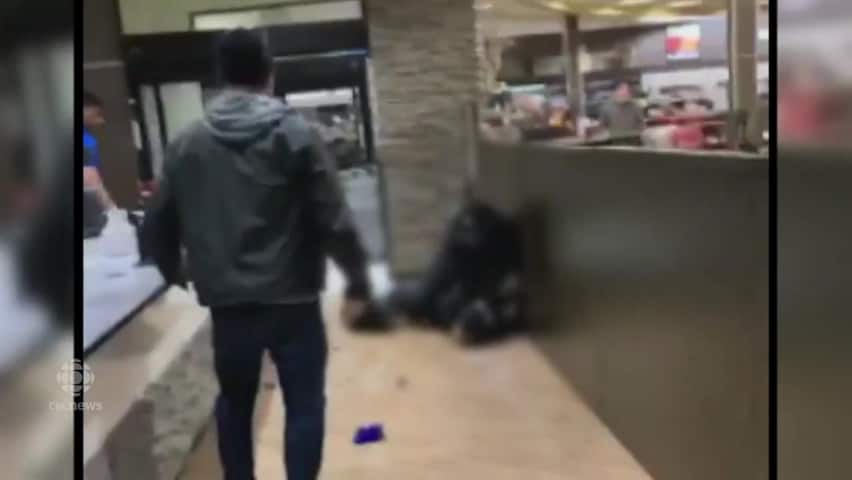 1 year ago
2:02
Liquor stores in this province are getting robbed hundreds of times a week, only months after Manitoba Liquor and Lotteries unveiled a strategy to reduce the incidence of theft. 2:02
CBC's Journalistic Standards and Practices|About CBC News