Some accessibility upgrades already completed to one level of chamber

The first level of the chamber was leveled in recent weeks to accommodate wheelchairs.

Fletcher, who is quadriplegic and needs a wheelchair to move around, filed a complaint claiming his privilege as a parliamentarian had been breached due to his inability to access the chamber floor.

Fletcher believes making the floor of the chamber accessible should be a priority and says the province hasn't moved fast enough to make it happen.

On Friday during question period, Speaker of the House Myrna Driedger ruled against the complaint.

Driedger asked whether Fletcher is in anyway impeded from entering the building or chamber. She answered her own question during the ruling, stating that "from a purely technical aspect," Fletcher can in fact access the building and chamber.

Driedger said more needs to be done to accommodate people with disabilities, adding efforts are underway to make the chamber more accessible.

"[I'm] not satisfied with the layout of the chamber," Driedger said. "It is not acceptable in 2016."

Fletcher lost a call for a verbal vote on the matter in the house and then requested a recorded vote.

That prompted Driedger and others to take a recess behind closed doors. When they emerged a vote was held, and the majority voted against Fletcher's complaint. The Liberals and NDP voted in support of the complaint.

Fletcher had no notice that the speaker was going to rule on his motion Monday. It came as a complete surprise and he was a little put off he had no time to plan a response, he said.

The province formed a committee in the summer, that included representatives from the disabled community, to review accessibility issues in the legislature. Fletcher said he was not included in those talks.

The plan is to introduce accessibility renovations in phases. The province said that due to the age and historic nature of the building, those renovations could take time.

Some offices and bathrooms have already been renovated in the legislature to address accessibility issues.

Fletcher's personal office has been renovated, although he maintains construction has been going on for months and still isn't finished.

The next phase is to make the floor of the chamber accessible. Fletcher said he doesn't like how the province has approached the renovations or consultation process.

Ramp access to the Manitoba Legislature was built when former premier Gary Doer was still in office. 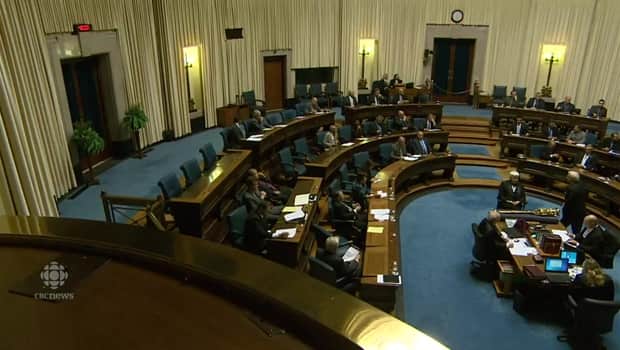 4 years agoVideo
1:39
The fall session at the Manitoba Legislature got underway in Winnipeg Monday. 1:39