Angry union members marched in the halls of the Manitoba Legislative Building on Wednesday to protest the Progressive Conservative government's proposal to change the rules for workers who want to unionize. 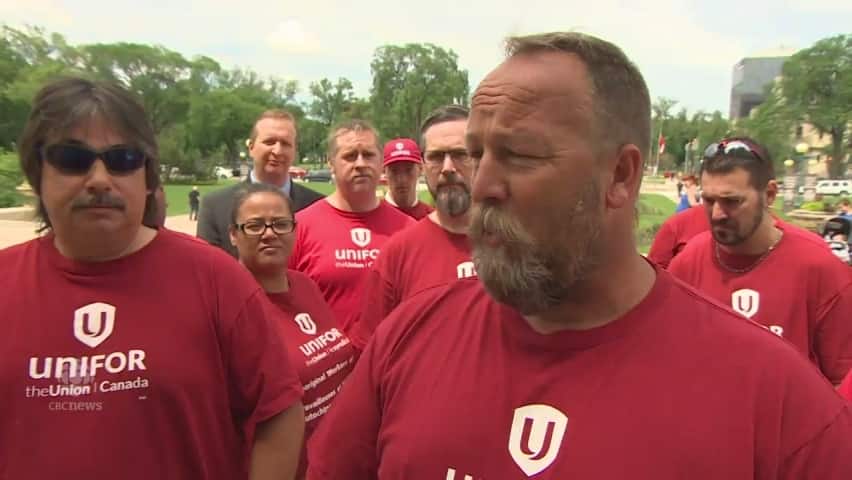 5 years agoVideo
1:44
Angry union members marched in the halls of the Manitoba Legislative Building on Wednesday to protest the Progressive Conservative government's proposed changes to the province's labour legislation. 1:44

Angry union members marched in the halls of the Manitoba Legislative Building on Wednesday to protest the Progressive Conservative government's proposed changes to the province's labour legislation.

More than 60 members of Unifor chanted and shouted in the gallery as the government tabled Bill 7, the proposed labour relations amendment act, which calls for the end of automatic certification for unions  — even if 65 per cent of employees in a workplace sign membership cards — and instead would require secret ballot votes among workers before a union can be certified as their bargaining unit.

"This is the end of labour peace in Manitoba," some union members sitting in the public gallery yelled during question period, while others exclaimed, "Shame on this Conservative government."

Some of the protesters shouted, "We are watching you" before they were escorted out by security.

"I do respect freedom of speech but when it's done for the purpose of intimidation, it's not appropriate and I think highlights the importance of a secret ballot, quite frankly," Pallister told reporters after question period.

"I'm a former union rep. I'm the son of a union rep," he added. "I can tell you that sometimes tactics are used to influence the outcomes of votes that are, I don't think, acceptable." 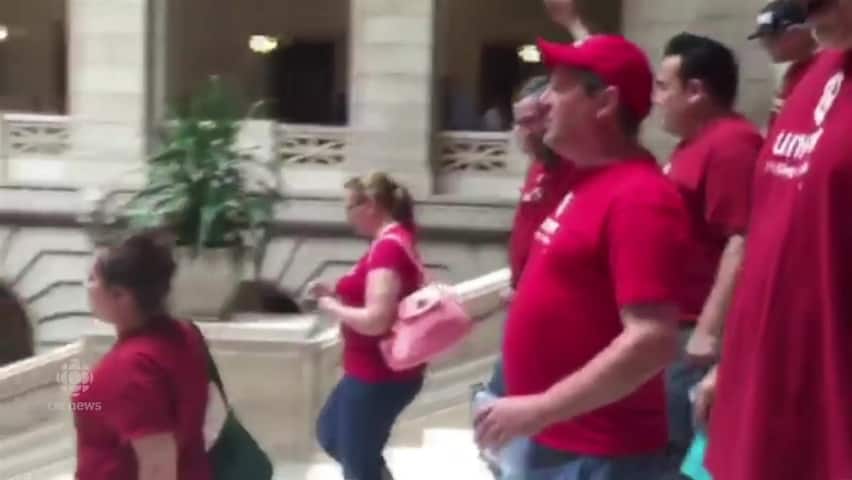 5 years agoVideo
0:54
Members of Unifor paraded through the halls of the Manitoba Legislative Building on Wednesday to protest the Progressive Conservative government's proposed changes to the province's labour laws. 0:54

The Labour Relations Act currently states that the Manitoba Labour Board must automatically certify a union as the bargaining unit for a group of workers if at least 65 per cent of the employees want the union to represent them.

If between 40 and 65 per cent of workers want to be unionized, the board has to conduct a vote among the employees. Applications with less than 40 per cent employee support are dismissed.

Bill 7 would eliminate the option for the board to automatically certify a union with 65 per cent employee support. Instead, all applications with at least 40 per cent support must go through a secret ballot vote.

Kevin Rebeck, president of the Manitoba Federation of Labour, says the proposal is bad news for unionized workers.

"This law's going to make that an even bigger demand on the labour board and an even bigger time frame for employers to intimidate workers and interfere with their voting process. That's not fair, that's not right," he said.

"It's about not providing workers a free vote. They're giving the employer time to intimidate workers. That's what this law is changing."

But Pallister, who promised to change labour laws ahead of the April 19 election, said the change to a secret ballot would prevent the intimidation of workers.

"The fact is a secret ballot is a logical way to make sure that people are able to vote the way they really feel and not necessarily the way someone else feels who is standing over them while a vote is cast," he said.

During the election campaign, Pallister said he wants to end what he calls "forced privatization," in which companies with and without unionized workforces both have to pay union dues to work on large government projects.

NDP labour critic Tom Lindsey called Bill 7 an attack on workers and said the current legislation is fair and balanced.

"Brian Pallister has removed protections against intimidation, which we cannot accept," Lindsey said in a news release.

"He has shown Manitobans that he's in the pocket of big business and will not stand up for working families' rights to safe workplaces, fair wages and a voice at the table."

The Tory government introduced other bills that were promised in the campaign, including one that seeks to eliminate a public subsidy for political parties.