A North Dakota company has quietly been coming into Manitoba to offer diagnostic services for a fee, catching health officials off guard and sparking the health minister to order a review into the mobile clinic.

A North Dakota company has quietly been crossing into Manitoba to offer diagnostic services for a fee, catching health officials off guard and sparking the province's health minister to order a review into the mobile clinic.

Access Health Imaging has come to Manitoba numerous times over the past year, offering echocardiograms for $399 and other tests at hotels such as the Motel 6 in Brandon and Roadhouse 52 in Steinbach​​​​​.

It's happening all under the noses of Manitoba Health, Health Minister Cameron Friesen and the College of Physicians and Surgeons of Manitoba, who all told CBC they had no knowledge of the company's operations.

Dr. James Tam, a Winnipeg-based cardiologist, said these companies offer patients procedures, whether needed or not, that burden the system and can lead to further unnecessary tests.

"I think it's ludicrous, totally ludicrous," he said.

Meanwhile, federal health officials say they've heard of these cross-border screenings before and say provinces allowing an echocardiogram to be offered for a fee — no matter the venue — runs counter to the Canada Health Act.

CBC used a hidden camera to see the makeshift operation in action in Steinbach.

Posing as a patient wanting an echocardiogram, a CBC producer was able to book an appointment within two weeks, compared to the current 14-month wait for non-urgent scans in Winnipeg.  She did not require a doctor's requisition and was given the option to go to Steinbach or Morden. 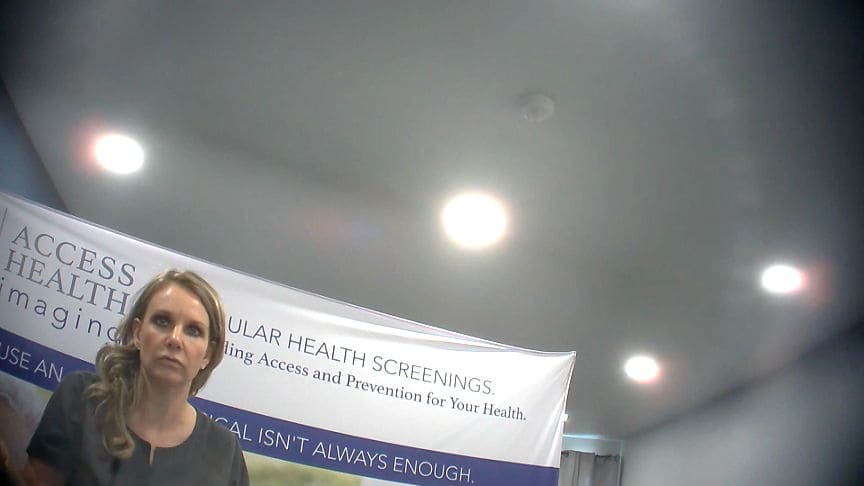 1 year ago
1:07
A CBC producer went to the Roadhouse 52 Inn and Suites in Steinbach Man. to find out how a mobile echocardiogram works. 1:07

The screening room was set up in a cramped hotel conference room, with a large sign for Access Health Imaging acting as a privacy curtain, on the other side of which patients were being scanned.

Alison Spielvogel, who runs the company and performs the echocardiograms, was the only one in the room. She is certified as a diagnostic cardiac sonographer with The American Registry for Diagnostic Medical Sonography.

"It is apples to apples — just the border crossing," she said, when asked about how a doctor in Manitoba will interpret the results.

"The testing is completely standardized. There is no reason that if and when you take your report to your physician, that they will be like, 'This is Greek to me.'"

The scans are forwarded to a cardiologist in North Dakota and a report is provided to the patient within two to three weeks, she explained.

Company similar to Access previously kicked out of Manitoba, B.C.

Multiple requests for comment to Spielvogel were not returned. The phone number listed on the company's website is no longer in service.

Manitoba's health minister told CBC he has "instructed departmental officials to review concerns raised by the CBC about a mobile clinic allegedly operating in Manitoba communities."

Officials with Manitoba Health said they are reviewing the information forwarded to them by CBC, acknowledging this is the first time they were made aware of the company.

The rules surrounding these fee-based services can be murky. For example, Prota Clinic, located on Lorimer Boulevard in Winnipeg, offers elective echocardiograms for $650.

This isn't Spielvogel's first foray into cross-border mobile screening, however, and the last time she was here, Manitoba officials ruled these mobile clinics required approval by the province to operate.

Back in 2007, she was a member of the Mobile Life Screening team with her then-husband Randy Spielvogel. Eventually, Manitoba Health ruled its screenings constituted a laboratory under the Health Services Insurance Act and denied its approval to operate.

The company moved into British Columbia in 2013 before the Supreme Court of B.C. eventually banned them for not being accredited by that province's College of Physicians and Surgeons.

The Spielvogels divorced in 2015 and Randy Spielvogel said he has no affiliation with Access Health Imaging.

Federal officials say they are aware of cross-border screening companies previously operating in B.C. and Ontario and said "both provincial governments acted quickly to prohibit these clinics from offering private pay diagnostics within their jurisdictions."

Under the Canada Health Act (CHA), echocardiograms are deemed an insured service "regardless of the venue where the services are delivered."

"Charging patients directly for these services runs counter to the CHA. Access to health services should be based on medical need and not the ability and willingness to pay," a spokesperson for Health Canada said in a written statement.

Since the health practitioners involved are not Canadian doctors, the federal government says the responsibility for regulating these mobile clinics falls to the province.

"The province of Manitoba is best placed to intervene in this matter, as they have successfully done in the past," the spokesperson said in the statement.

Several cardiologists raised flags about these types of screenings and don't see it as an "apples to apples" situation.

These types of tests are often advertised as a way for patients to proactively monitor their health through screenings. While Access Health Imaging's website advertises that it can perform echos, stroke screenings, EKGs, general ultrasounds and MRIs, it doesn't specifically advertise that it operates in Manitoba or offer dates when its mobile clinics are in the province.

The site also states it "does not replace a physician's medical advice, medical services or medical testing."

It is apples to apples — just the border crossing.- Alison Spielvogel, of Access Health Imaging

Dr. Chris Simpson, a cardiologist and vice-dean of the School of Medicine at Queen's University in Kingston, Ont., said these clinics are coming to Manitoba because of the failings in the public system.

Over the past three years, the wait times for elective echocardiograms have skyrocketed in Winnipeg, from an average of 21 weeks in 2016-17 to more than 68 weeks at St. Boniface Hospital as of May.

"This should all be a wake-up call to all of the stakeholders in Manitoba who've watched this echo wait time problem evolve over many years," Simpson said.

"This is exactly what happens when the public offering is inadequate, and the end result is going to be people getting tests based on their ability to pay rather than on the basis of their need."

At Access Health Imaging, the patient is given a written report from a North Dakota cardiologist rather than the actual images. Tam said this puts doctors in a difficult position because they have to trust the interpretation of that doctor.

"I'm not just going to rely on someone's interpretation. I'm going to say, 'Well, let me see those pictures. Let me see where the cancer is and see whether it's real,'" he said.

It is always problematic when patients are able to obtain such tests without a doctor's order, Simpson said, as it inevitably will lead to more testing and further burden the health-care system.

"There's a lot of low-value testing that we have to protect patients from; a 20-year-old perfectly healthy person with no risk factors for anything and who doesn't have any symptoms doesn't need an echocardiogram," he said.

"If I saw something that from a lab that I didn't know, I don't know that I'd have any choice but to either repeat the echo in my own facility to confirm that, or do some other tests to confirm it."