Health information from card can be accessed with mobile app, province says 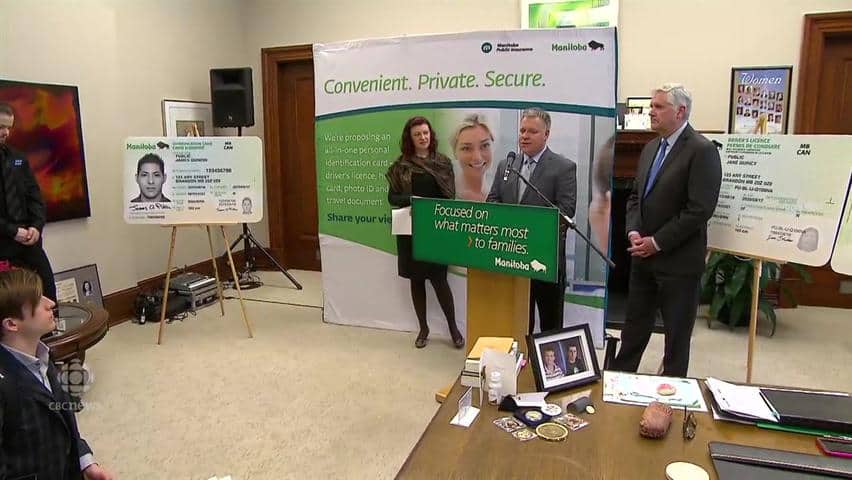 5 years ago
2:11
An all-in-one Personal Identification Card combining a person's driver's licence, photo ID, health card and travel ID will land in Manitobans' wallets starting in the fall of 2017. 2:11

The provincial government says it has approved the Personal Identification Cards, which will replace the driver's licences issued by Manitoba Public Insurance (MPI) and paper registration cards issued by Manitoba Health, after people expressed strong support for an all-in-one card during a five-week consultation period in August.

MPI will start issuing the cards to Manitobans over the age of 16 as early as in the fall of 2017, Health Minister Sharon Blady and Justice Minister Gord Mackintosh announced on Monday.

The province says changing over to the new Personal Identification Cards will be free of charge to all Manitobans. The transition will cost the government $13 million, which MPI says will not be passed on to ratepayers.

Like the existing driver's licence, the combined card will be made of plastic and will have the cardholder's photo and driver's licence information printed on the front, but it will also have that individual's Personal Health Identification Number (PHIN) on the back.

The new cards will be authenticated using "industry-proven policies, procedures and practices" that are currently being used by MPI for driver's licences and will include technology to protect cardholders against identity theft, forgery and fraud, according to the province.

The minister added that her favourite feature is the card's durability, especially compared to the current health cards, as well as the convenience of not having to carry around two cards.

"As the mom of two boys, I can tell you that when a wallet gets put in the washer, right now the driver's licence comes out OK but the health card doesn't," Blady said.

"Now this would mean that you'd have it on the same card, it's all secure, and it will survive the washer and the dryer."

Blady said among other things, the new cards will make it easier for Manitobans to indicate if they want to be part of the province's organ donor registry.

As well, the health information will be accessible from the cardholder's smartphone or tablet using an app that will serve as a virtual card — a first of its kind in Canada, said Mackintosh.

MPI says the driver's licence portion of the card will not be accessible with a mobile app at this time.

But Kevin Walby, a privacy expert and associate professor of criminal justice at the University of Winnipeg, said he's not convinced that having numerous forms of identification on one card is a good idea.

"Who's going to have access to it? Who's it going to be shared with?" Walby said.

"I know they said it's not going to be shared between ministries, but I think we need to see more details, more of an action plan, before anybody's forced to adopt this card."

The province says having an all-in-one identification and health card will help improve access to photo ID for low-income and homeless Manitobans.

That feature is welcomed by staff at Siloam Mission in Winnipeg, who say it means people with no fixed address can have proper photo identification with them.

"It's ownership of a piece of ID for themselves," said Vanessa Gamblin, manager of Siloam Mission's drop-in and shelter programs.

"Constantly being transient … it's an opportunity to celebrate that 'I have something that I can hold onto.'"

Siloam client Larry Kowbel said many people on the street have only their Manitoba Health cards, which can become wet and fall apart since they're made of paper, so durable plastic cards will be useful.

As well, Kowbel said he won't have to run around as much if he needs to provide identification for job interviews, housing applications and medical appointments.

"That's very good because then you don't have [to] run as many offices and you don't have deal with as many channels. I would love to get this right away," he said.

But Charlie Whiteway, another client of Siloam Mission, said he wonders if having all of his personal identification in one place would make the new cards easier or more difficult to replace if they are stolen or lost.

"What if it is in your wallet and somebody jumped you and then robs you? How long is it going to take for that ID [to be] replaced?" asked Whiteway, whose wallet — containing all of his ID cards — was stolen when he was robbed recently.

At the same time, he said he hopes the new ID cards will make it easier at appointments and when he needs to fill out applications.