The Manitoba government is considering introducing a health-care tax that residents would have to pay based on income.

Premium could make up for Ottawa's changes to rate of health-care increases, Premier Brian Pallister says

The Manitoba government is considering introducing a health-care tax that residents would have to pay based on income.

Manitoba Premier Brian Pallister made the announcement at a press conference Wednesday morning but did not say how much Manitobans could be paying if the plan goes ahead.

Pallister said Manitobans will have to start paying health-care premiums, as residents in some other provinces already do, or prepare to see services cut.

Comes on heels of battle with feds

The government said health-care premiums could help Manitoba maintain its level of care in the wake of changes to the rate at which federal health transfers will go up over the next several years.

Last year, Ottawa announced the Canada Health Transfer would increase by three per cent, down from the six per cent increases the provinces had been receiving.

While initially unhappy with the change, each province eventually signed on to a federal health-care deal. Last month, Manitoba became the final province to sign on, ending a standoff with the feds over health-care funding.

The deal will see Manitoba get three per cent annual increases to the Canada Health Transfer and $399.6 million over 10 years for mental-health and home-care services.

Pallister says compared to the old model, the cash Ottawa is offering leaves Manitoba short $2 billion over 10 years, and asking Manitobans to pay premiums on health care could make up for that shortfall.

"It's most certainly a tax increase, there's no doubt of that, and I don't think we should couch it in any way different from that," Pallister said. 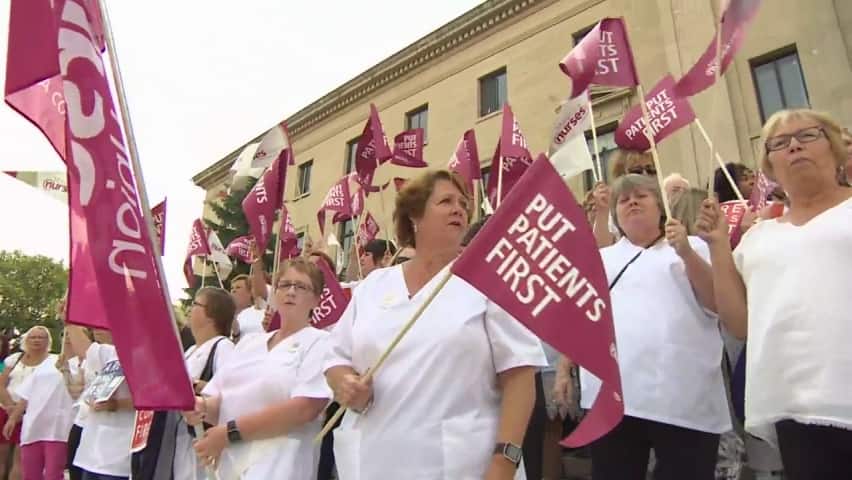 3 years agoVideo
2:43
The Manitoba government says it's considering raising taxes on health care. It's something the Pallister government had promised not to do. The Premier says the government has no choice. 2:43

The province is asking Manitobans to weigh in on the plan for premiums through a new online survey.  Also in the survey are questions about the upcoming legalization of pot.

He said the government's proposal "is essentially holding a gun to the heads of Manitobans and telling them to choose which they want."

The Manitoba Government and General Employees' Union said changes are needed to Manitoba's health-care system but forcing residents to pay premiums isn't the way to go.

Speaking at a Wednesday rally to protest health-care changes — which was planned before Pallister's announcement — MGEU president Michelle Gawronsky suggested to the crowd outside the Manitoba Legislature that corporations should pay more tax so individuals aren't left to foot the bill.

Gawronsky said she wants to have a meeting with Pallister, who she said was accessible prior to being elected, but so far no meeting has been granted.

"That door slammed shut and we haven't been able to talk to anybody."

Pallister said the province will not hold a referendum on the new tax because it is not a change to sales or income tax.

Health-care premiums already exist in other provinces like British Columbia and Ontario.

In B.C., for example, rates go as high as $75 per adult per month for people making over $42,000 a year. Meanwhile, people making less than $24,000 a year, children under the age of 19 and full-time post-secondary students pay no premium in the province.

In Ontario, residents earning an income of more than $20,000 per year pay a health-care premium of up to $900 annually.

Some people were already expressing concern about the possible new tax Wednesday.

"It's not going to be fair for people," said health-care aide Rosalie Toledo, who is worried about her job and attended Wednesday's rally at the Legislature.

Toledo said she's opposed to paying any kind of a health-care tax.

"No cuts, no tax. I'm paying too much tax already."

"Imposing a massive tax hike and spinning it as a health-care fee is a failed policy that other provinces are reversing," MacKay in a statement.

With files from Sean Kavanagh, Nelly Gonzalez and The Canadian Press