Manitoba officials say a fire nearly half the size of Winnipeg that is raging toward Little Grand Rapids and Pauingassi First Nation was caused by a human.

Manitoba officials say a fire nearly half the size of Winnipeg that is raging toward Little Grand Rapids and Pauingassi First Nation was human caused.

Hundreds crowded into a hot school gym in Little Grand Rapids overnight, waiting to be flown to safety as the fire scorches closer toward the fly-in community about 265 kilometres northeast of Winnipeg.

A spokesperson for the provincial government said Wednesday the fire was human caused and started around midday on Monday before growing rapidly.

"Initially the fire was one-tenth of a hectare and crews believed it could be contained, however high winds picked up, and the fire got into a section of brush with taller trees and the fire began to run along the tree tops," the spokesperson wrote in an email.

The Red Cross, members of the Canadian Armed Forces and Indigenous Services Canada are working to evacuate the eastern Manitoba communities Wednesday as wildfires in tinder-dry conditions continue to burn.

"Right now it's completely white out here. The smoke is very thick," said Theresa Eischen, a teacher in Little Grand Rapids who was among the people awaiting evacuation in the gym. "The planes aren't able to land."

About 60 vulnerable people in Little Grand Rapids were flown out Tuesday.

Pauingassi officials also called for an evacuation overnight because the wildfire is moving toward them.

The Southern Chiefs' Organization and Little Grand Rapids chief and council issued a joint statement saying there have been reports that 11 homes were destroyed in fires, though hazy conditions have made that difficult to confirm. 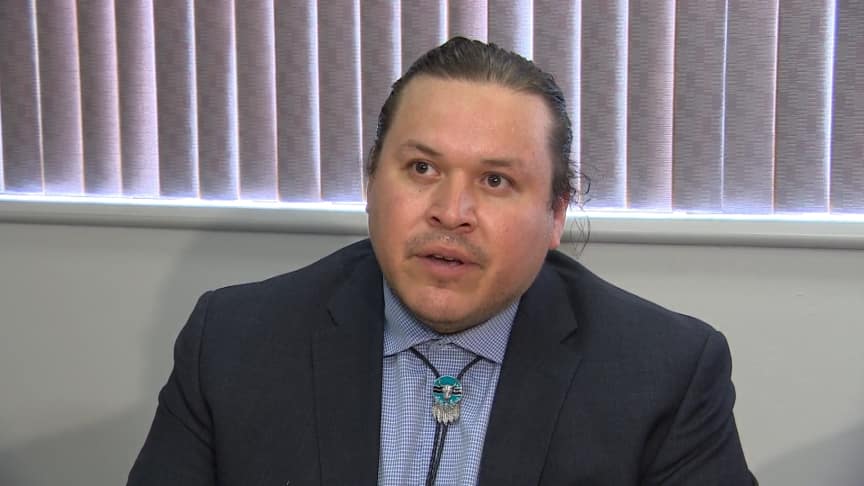 'All the non-Indigenous people were flown out'

3 years agoVideo
0:41
Grand Chief Jerry Daniels says they've been asking government officials for the community to be evacuated for the last two days, but he was told the fire was under control. 0:41

People in Little Grand Rapids were asked to leave their homes Tuesday night and stay in the school gym until a full evacuation could take place.

Eischen said some tried taking boats in the night to the airport, which is across Family Lake from most of the community, but they were turned away because planes weren't able to land.

Amik Aviation, which provides transportation to northern communities, cancelled all of its regularly scheduled flights to help with evacuations.

Manager Terrence Owen, who has family in Little Grand Rapids, is getting texts, phone calls and pictures which describe the blaze creeping closer and the smoke getting heavy.

"It's pretty bad," he said Wednesday. "No one has seen a fire like this before."

Amik's pilots used float planes to land on the water because the fire was still too close to the airport.

Residents then take a boat to the plane, but Owen said only a handful of people can fit in the float planes.

People stuck in the gym were starting to get anxious, said Eischen.

"A lot of crying, I think they're starting to feel the effects of the smoke," she said. "They're not comfortable … being in a gym all night, and it's hot."

The 20,000-hectare fire nearly doubled in size in a span of days.

Four Interlake and eastern Manitoba First Nations have been evacuated in recent days, including Sapotaweyak Cree Nation, more than 400 kilometres northwest of Winnipeg along the shores of the northern basin of Lake Winnipegosis.

Ontario sent 80 firefighters, with another 40 expected this week, while as many as four water bombers from Quebec are expected in Manitoba by the end of the day Wednesday.

"We're working very closely with the leadership of all the First Nations just to make sure that the people who are being evacuated have what they need, and that we can get everybody out as quickly and safely as possible," said Small.

Burn bans remain in effect for much of south, central, eastern and western Manitoba as some areas are in the grips of one of the driest springs in years.

There have been 166 wildfires in Manitoba this spring; the average for this time of year is 100.

Sapotaweyak went from a partial to a full evacuation between Sunday and early this week. More than 660 evacuees are staying in hotels in Brandon, Swan River and The Pas, said Small, and that number is expected to go up.

The evacuation order remains in place, and the only people left are helping with the emergency response and firefighting efforts, said Small.

Southeast of Sapotaweyak, an evacuation order was lifted for Kinonjeoshtegon First Nation (also known as Jackhead), 225 kilometres north of Winnipeg, and the surrounding area. A small number of people stayed in Winnipeg overnight but will head home Wednesday, Small said.

Two homes were evacuated and school closures remain in effect in Ashern and the rural municipalities of West Interlake and Grahamdale, where states of emergency were declared Monday. Ashern is about 170 kilometres northwest of Winnipeg in the Interlake area.

Fires in the area totalled about 11,000 hectares (about one-quarter the size of Winnipeg) as of Wednesday, the Manitoba government said.

Kyla Klatt, emergency co-ordinator for Grahamdale, said Highway 6 is closed as fires in the area are not yet under control.

She said people should stay out of the area.

"They will not be let through, and please, no sightseers," she said. "They just get in the way of our firefighters doing their job."

The Red Cross doesn't accept clothing or food donations for fire evacuees, but Small welcomed anyone who wants to help to make financial donations online for future disaster relief and evacuation efforts.

"We just ask people, we know that they've got good hearts, but we are not taking donations of goods at this time," he said, encouraging people to sign up to volunteer online.​

With files from Meaghan Ketcheson, The Canadian Press