Manitoba flood: Assiniboine River to crest in Brandon on Saturday

Thousands of residents in Brandon, Man., are being warned of possible evacuations, as officials believe the Assiniboine River may crest in the western Manitoba city as early as midday Saturday. 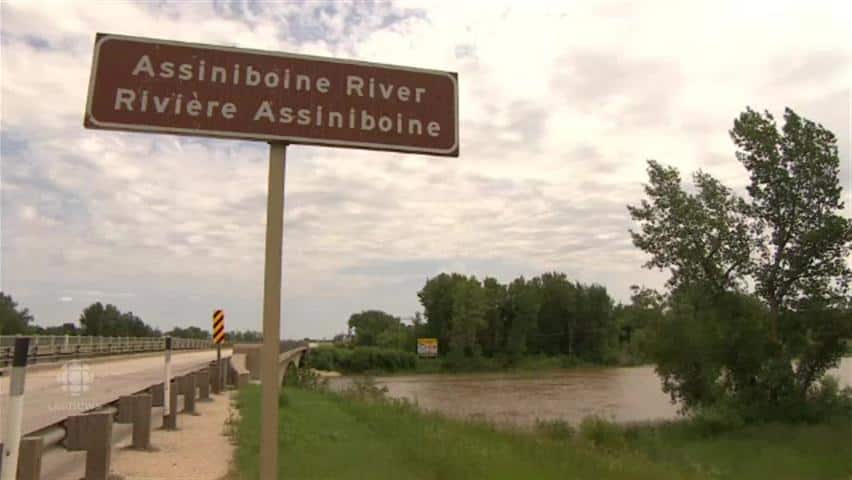 7 years agoVideo
2:02
The Manitoba government has declared a provincewide state of emergency, as communities brace for floodwaters from Saskatchewan. 2:02

Thousands of residents in Brandon, Man., are being warned of possible evacuations, as officials believe the Assiniboine River may crest in the western Manitoba city as early as midday Saturday.

Meanwhile, the provincial government, which has declared a provincewide state of emergency, says it's getting ready to cut the Hoop and Holler Bend to ease pressure on the river, which is swollen with floodwaters from Saskatchewan.

"Since declaring a state of emergency this morning, the flood forecast has worsened," Premier Greg Selinger told reporters at 6 p.m. CT Friday.

"We are now looking at a higher crest and the water is moving more quickly than anticipated."

​Preparations will begin this weekend for the controlled breach, which may take place on Monday or Tuesday.

Hoop and Holler, which is a bend in the Assiniboine River, was the same location that was intentionally breached during the spring flood of 2011. Excavators cut through a roadway that had doubled as a dike, allowing floodwaters from the river to spill onto nearby farmland.

As was the case in 2011, flood officials say they're concerned that if they don't create a controlled breach, other dikes along the river's path could collapse and cause an uncontrolled flood.

Pre-evacuation notices going out in Brandon

The Assiniboine flows through Brandon and has been expected to crest sometime this weekend. City officials gave the latest crest estimate — noon on Saturday — at a news conference at 5 p.m. Friday.

About 2,000 to 2,500 residents in areas north and south of the river will receive pre-evacuation notices starting Friday evening, but Mayor Shari Decter Hirst stressed that the city is not in evacuation mode.

Officials said they believe the river will reach levels higher than previously expected and be as high as they were during the 2011 flood.

"This type of flood is a new experience for Manitoba," said Brian Kayes, the City of Brandon's emergency co-ordinator.

"To have something this extreme that is entirely rain water, it's doing some things that according to the province … they haven't seen before."

The river is expected to recede slightly after Saturday's crest, then peak again a few days later, according to the city.

Kayes said even with the current situation, Brandon is ready for the river crest.

Selinger declared the provincial state of emergency effective noon Friday, saying he has asked Prime Minister Stephen Harper to have Canadian Armed Forces soldiers on the ground in Manitoba by Saturday to assist with flood relief efforts.

"We need to be able to take action to protect the safety, health and welfare of Manitobans," said Selinger.

"Declaring a provincial state of emergency will allow us to take steps quickly to protect people and property in the area."

The federal government says it is co-ordinating its response to the province's request for help.

"Our thoughts and prayers are with those families who have been affected by the recent flooding in Manitoba," Defence Minister Rob Nicholson said in a news release.

"As always, the Canadian Armed Forces stand ready to ensure the safety of Canadians and assist communities in their time of need."

Soldiers with CFB Shilo, near Brandon, are preparing to be deployed in the flood fight, but a Canadian Forces spokesperson told CBC News it's not known how many soldiers will go or when they will will be sent out.

The military is in the process of determining what is needed, in consultation with the province, as well as calling back staff from leave and making other preparations, the spokesperson said.

Personnel with 17 Wing in Winnipeg have not yet been deployed, either, but a spokesperson told CBC News officials are conducting staff and equipment checks in case they are officially called in.

Canadian Forces personnel will work to reinforce the dikes along the Assiniboine River between Portage la Prairie and Winnipeg, where 200 homes are at risk.

They will also help raise the dikes along the Portage Diversion — a 29-kilometre channel that directs some of the flood water from the Assiniboine north to Lake Manitoba.

"The province is currently producing half a million additional sandbags to reinforce the Assiniboine dikes," Selinger said.

"This will be in addition to the two million sandbags we have in stock and we also have 17,000 super sandbags available."

The regional municipalities of Portage la Prairie, Cartier, St. Francois Xavier and Headingley are the biggest areas of concern. They are being advised to prepare for flood levels more than 30 centimetres higher than those of 2011.

Selinger said the difference between this flood and the one in 2011 is how little time there is to prepare this time around.

"But we also know that when we do this together we will get through this, and I am confident we will do that," he said.

"We will get through this as best we can given the challenge we have with this unprecedented amount of water coming here again just three years after the last time this happened."

A command centre is being established near Portage la Prairie to assist with liaison efforts between the military and the affected communities, Selinger said.

Floodwaters began washing across a road in Brandon on Friday even though the crest isn't expected to reach the city until this weekend and then Portage la Prairie by July 11.

Steve Topping with Manitoba Water Stewardship​ called the rate at which the water is flowing "unprecedented."

"Things are ramping up very quickly. This is a fast-moving event and we have very good hydrometric gauges that are providing us 24/7 information," he said.

Topping said the difference between this year's flood and 2011 is that three years ago, there were weeks to prepare.  Now, he said, it's a matter of days.

He added that even after taking into account the floods of 2011, the water levels this year are unprecedented.

"This is unprecedented flash flooding we're seeing this summer," he said.

"Normally a crest will build, for instance, in Brandon, it would take three weeks in a spring runoff event. The storm ended on Sunday and they could see their crest, Saturday, Sunday."

The flooding is being caused by torrential rains last weekend in Manitoba and Saskatchewan.

Fifty municipalities and communities across Manitoba, mainly in the southwest and Interlake regions, have declared a state of local emergency since June 28.

Water from Saskatchewan is now flowing into Manitoba, deepening the problem in the province.

At least 698 Manitobans have had to leave their homes due to flooding so far this year, including about 160 evacuees from two communities during floods this past spring.

"The good news is people know what they are doing. We've been through this before," Selinger said.

"We need to prepare for significant and sustained flows down the Assiniboine River after the heavy rainstorms last weekend and forecasted additional rainfall this weekend," said Infrastructure and Transportation Minister Steve Ashton.

Environment Canada is calling for a risk of a severe thunderstorm Friday evening in the Brandon area and another thunderstorm on Saturday evening. Rain is also in the forecast for Monday.