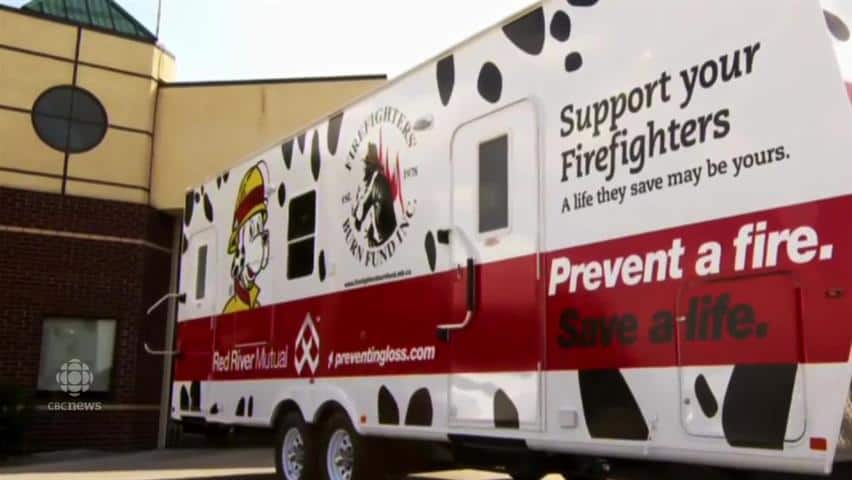 5 years agoVideo
2:48
Manitoba's Office of the Fire Commissioner hired a man to work with children on fire prevention last year but as CBC News has learned, he is a registered sex offender. 2:48

Manitoba's Office of the Fire Commissioner hired a man to work with children on fire prevention last year but as CBC News has learned, he is a registered sex offender.

The man, who's in his 30s, worked at the office for eight months before being fired in December 2015.

He is listed in the child abuse registry and on the national sex offender registry after a conviction in Brandon in 2010 for possessing child pornography which he pleaded guilty to downloading from the internet.

The fire commissioner's office (OFC) posted a newsletter on its website showing the man was hired last year in a summer student job program.  Part of the work included driving to communities around the province with a fire safety education trailer and talking to schoolchildren about fire safety.

The man was sentenced to 90 days in jail in 2010 followed by two years probation.  During that probation, he pleaded guilty in Brandon in 2011 to breaching a condition that he not access the internet for purposes other than for work and school. According to court documents, he began using Facebook to contact a teenaged girl who complained to police that he obtained her cell number and started texting her sexualized messages.

"What are you wearing, do you like to show your cleavage, too bad I can't see you naked you look like you'd look hot naked LOL," some of the texts written out in the documents read.

The man declined an interview, but when contacted by CBC News said he was not asked by the OFC to produce any documents related to his presence on the registries and said he did not provide any false information to the employer.

"It tells me as a professional that the employer in this case probably did not do its due diligence in checking ahead of time," Therrien said.

CBC News has no information that the man did anything wrong during his employment with the OFC.

The OFC refused to discuss the specifics of the case.

The spokesperson said the OFC does background screening, including criminal record checks and/or child abuse registry checks for term and regular employees, adding that, "moving forward, summer students will also be required to provide the same checks, depending on the nature of their responsibilities (such as speaking to students or at events where youth may be present)."

The man on the child abuse registry, as well as a young adult female student, were both hired for the OFC fire safety jobs as Brandon University students.

He had been working on a bachelor of science degree at Brandon University in the Applied Disaster and Emergency Management program, court documents show.

The two students were hired through the province's student employment placement program called STEP Services. The website for STEP says eligible students must be at least 16 years old and be returning to school in the fall.

The STEP website also says students may be required to provide records checks for the child abuse registry or criminal records but a spokesperson for the program said the onus is on the government employer to do any checking that may be pertinent.

"As a referral service, STEP Services does not participate in the interview process.  Each department's management will screen, interview and require appropriate checks, based on the requirements for the position being filled.  This can and does include abuse registry checks, criminal records checks, etc." the spokesperson said.

Canadian Centre for Child Protection director of education Noni Classen would not comment on this specific case but she agrees with Therrien about the need for record checks.

"If someone does have a past history, it would be picked up through that especially if they have been charged or convicted," Classen said.

She said organizations need to have policies in place is to make sure that individuals who have a history of harming children are not working with children.

She said when policies don't exist or employers don't follow them, that can have a far-reaching effect on communities and organizations.

"There's a breach in trust that ends up happening," she said, "I think that it's important that when there is a breach, that you do circle back to restore that sense of community trust and safety."