Production volume at about $127M for year ending in March, with significant growth in animation

Have you benefited from the boom? Tell us what you think in a video comment in our new Good Talk experiment.

Manitoba's film industry has posted its best year in a decade.

Production volume for the past year sits around $127 million, according to Manitoba Film and Music.

That's 27 per cent better than the annual average, and it's a trend Manitoba Film and Music's CEO expects to continue.

"I would say this is the best province in the country to be shooting in," said Carole Vivier. "We have the best tax credit in Canada. The reason for that is, we don't have a direct flight to Los Angeles. We don't have direct flights to New York.  We are a smaller centre so we have to work harder and be more competitive than anyone else to stay on that map."

Other provinces have rolled back tax credits for film productions in recent years, and some have put caps on the amount productions can claim.

Nova Scotia replaced their tax credit with a film and television incentive fund, sparking an exodus of young, educated workers.

Last spring, British Columbia announced it was lowering its film industry tax credit from 33 per cent to 28 per cent.

Even Saskatchewan scrapped its credit, and one survey reported about 35 per cent of the people in industry left in the following four years.

Over the past 10 years, there has been more than $1 billion in production, with about half of that staying in the province, according to Vivier.

"That's in people paying their taxes here — all the crews that are working here, this is all Manitoba. They all pay taxes here. It's the suppliers, it's the restaurants, it's the car rentals, it's legal, hotels — it all stays here," said Vivier.

2017 started with filming of five features, including Nomis, staring Stanley Tucci and Henry Cavill and the Keanu Reeves thriller Siberia.

Duffy runs Black Watch Entertainment, a Winnipeg-based production company. She said it's not only the tax credit that's helping bring in business but also the low Canadian dollar.

"I've lived in a lot of other bigger cities, and I wouldn't say I'm surprised that we have this here in Manitoba because we have a very supportive government and a very supportive community that has allowed us to do this here. Without that, and without them, this wouldn't be possible," said Duffy. "In August, we made a blizzard in a commercial campaign, and now, in almost April, we're making the middle of winter, and that's something our crew can handle."

On Thursday, more than 100 people gathered on a partially-closed section of Bannatyne Avenue to shoot the film's stars in a horse-drawn carriage.

Police were on hand, traffic was re-directed and a line of trailers stretched down two city blocks.

In one was a full kitchen with caterer Corby Pearce. Pearce has been catering movies for 13 years, and said the past few years he's seen higher quality shows, big names and bigger budgets.

"It's been pretty steady, good work for a good four years now. It's picked up quite a bit," said Pearce. "It's not just me, but a couple hundred people that now have actual, steady work that can do what they do for a living without having to look for outside work."

Pearce started Evolve Specialty Catering nine years ago, after spending years getting to know the business.

He said in the past, there were times where the company was waiting for business, trying to decide if they should take on other events and risk not being ready for a production when one showed up.

But now, he said, they're "able to thrive," and "reinvest ourselves into this business so we can do these jobs better, take on bigger productions, more productions."

Expansion isn't just on Pearce's mind. Duffy said her production company is actively looking for more crew members, and Vivier said more big names are on their way to the province.

Could credit be cut?

"I think it's going to continue. We have a great mix of the L.A.-production and the local production," said Vivier. "We've had some great stars coming in and we've had them coming in for years and I don't expect that will change … Word of mouth is our best marketing."

Manitoba's film industry tax credit is approved until 2019, but right now, the province is doing a return-on-investment review of Manitoba's arts sector.

The province will spend months holding community meetings and forums with arts groups with fiscal pressure a top priority, but Vivier said Manitoba Film and Music isn't worried the credit will get cut.

"I think the economics are so strong that we are not concerned that this sector isn't being recognized for the contribution it makes to the province," said Vivier. "The current government in power, the [Progressive] Conservatives, are the ones who gave us the tax credit to begin with back in 1997."

Scouts show up at premier's house

On Tuesday, Premier Brian Pallister wouldn't say anything about the future of the credit, but he did say a movie scout had been out to his house about potentially using it in shooting for the next instalment in the Chucky horror movie franchise.

"I think Manitobans are excited when they see Winnipeg or Manitoba featured in a Hollywood film," he said. "I think it's got some benefits in terms of promoting other aspects of our province. I know the industry has been an important job creator to our province and a growing cultural industry in our province."

Pallister said he wasn't able to offer up his house for the shoot, but he was a fan of the movies. 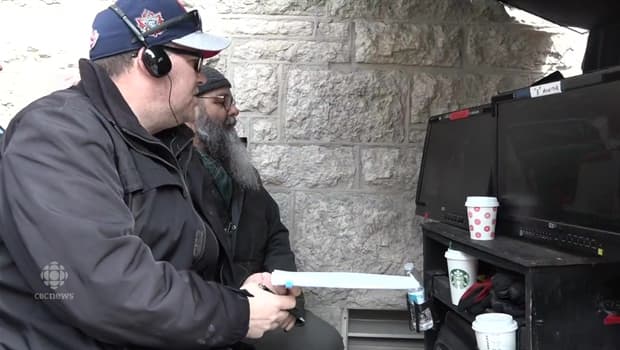 Manitoba's film industry has posted its best year in a decade.

4 years agoVideo
1:00
Production volume for the past year sits around $127 million, according to Manitoba Film and Music. 1:00

CBC News is partnering with GoodTalk, a new engagement tool that lets Canadians watch and record video comments on top stories and even get featured on the CBC. Follow the links to try it out.