The Manitoba government has finally moved to put new regulations in place to help protect families from false advertising and misleading pricing practices when purchasing a motor vehicle. 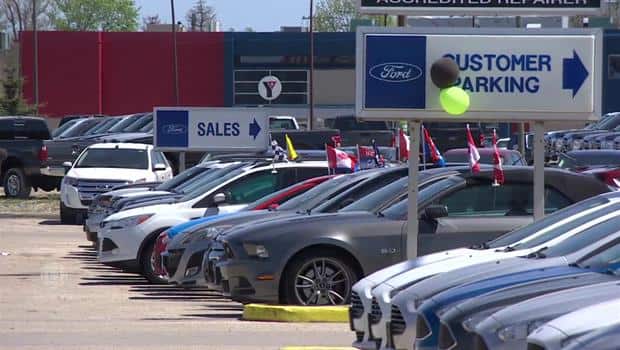 6 years agoVideo
1:58
The Manitoba government has finally moved to put new regulations in place to help protect families from false advertising and misleading pricing practices when purchasing a motor vehicle. 1:58

The Manitoba government has finally moved to put new regulations in place to help protect families from false advertising and misleading pricing practices when purchasing a motor vehicle.

The new law, which takes effect June 1 and will require dealers to use all-in pricing — so no fees remain hidden — was first revealed by the province in December 2012.

At that time, Premier Greg Selinger said the rules would take effect in the fall of 2013. On Thursday, Consumer Protection Minister Ron Lemieux said the extra year and a half was used to make sure the legislation was done right.

Basically, the most important change for car buyers is that the price advertised online, in the paper, or in person will always be the final price, except for taxes. The PST and GST will be added on top of that.

Buying a car is a significant purchase for families, typically the second-largest purchase after buying a home, Lemieux said Thursday in announcing the new rules.

It is important that consumers have clear and truthful information available to them when making these purchasing decisions, he said.

"We are pleased to have developed these new regulations in consultation with industry, stakeholders, consumer groups and other provinces with existing motor vehicle advertising legislation," Lemieux said.

Current vehicle advertising practices, such as omitting additional fees, charges, or conditions from prices, can be misleading or confusing for consumers, Lemieux said.

The new rules will improve the transparency when deciding to purchase a new vehicle and raise the standard of advertising in the marketplace, he added.

"It's disappointing of course because you think you're going to get a car for a certain price and there's all the add ons.  You don't feel so great, right?!" Willison told the CBC.

The system, Willison said, should be effective provided fines are applied consistently.

"You go on volume. That could get pretty expensive. Hopefully they would. right?"

The law will require vehicle dealers to: