Progressive Conservative Leader Brian Pallister won't publicly disclose his tax return, but he did reveal details about his bank account and vacation property in Costa Rica.

NDP leader released details from his 2014 tax return, called on PC leader to 'be transparent' 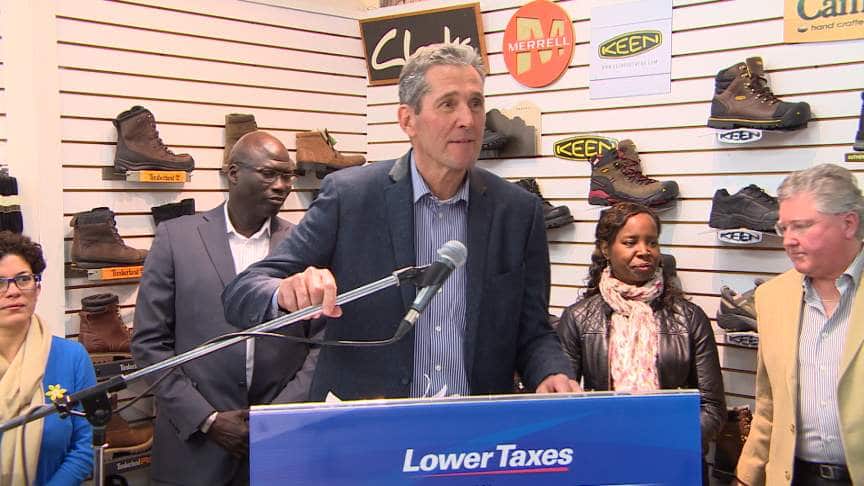 Progressive Conservative Leader Brian Pallister won't publicly disclose his tax return, but he did reveal details about his bank account and vacation property in Costa Rica.

Pallister has been facing pressure since NDP Leader Greg Selinger released details from his 2014 income tax return on Sunday and accused the Tories, who called the move a "desperate stunt," of not being transparent.

Selinger said transparency has become very important in light of the Panama Papers, which have raised questions about offshore tax havens among the rich and powerful.

The Panama Papers are leaked documents from a Panama-based law firm that show how the world's rich and powerful have been able to avoid taxes by stashing their wealth in other countries.

Speaking to reporters on Monday afternoon, Pallister stressed that he uses no offshore tax havens and he always pays his taxes.

"I wanted to make it very clear today that I never have had a tax haven, never will, and deplore the use of them. I have always reported all my earnings from all sources," he said.

Pallister, who as an MLA must disclose financial interests, is listed as having shares in an insurance company as of 2015.

He said he and his wife saved up money to buy a vacation property in Costa Rica about a decade ago.

"The account in Costa Rica and the property have always been reported on my tax return, which is confidential," Pallister said.

"The amount in my Costa Rican [bank account], the balance is, as of this morning, 620,802.26 colones," he added, referring to the local currency.

Pallister said the amount translates to roughly $2,300 Cdn. The currency conversion website XE.com converted that amount to about $1,500 Cdn as of Monday afternoon.

"We keep that account there so that we can pay for fixing up the property and pay our taxes and utility bills down there," he said, before making a jab at Selinger's New Democrats.

"That amount is less than half of the broken-promise taxes that Greg Selinger has inflicted on the average household in Manitoba over the last four years, with new taxes that he said he wouldn't invoke," he said.

However, she told reporters on Monday that she doesn't remember whether she filed a return for 2014.

"I actually don't know if I filed my taxes," Bokhari said. "I probably did; I just don't have it on me right now."

Bokhari said she supports the release of politicians' tax information if transparency is the goal, but not if it's intended to shame a high-earning candidate for making money.

"What he's doing is, frankly, he's trying to call out Brian Pallister," Bokhari said of Selinger.

"But I think that the principle or the intent behind this is for transparency, and I wouldn't not agree with that."

Earlier on Monday, the NDP asked, "What is Brian Pallister hiding?" in a series of tweets accusing the Tory leader of not releasing his tax return information and not disclosing any off-shore holdings.

In an interview earlier on Monday, Selinger said the Panama Papers have made transparency an important issue among politicians around the world.

"My tax return's pretty straightforward: what I earned … in income as the premier, what I paid on taxes, what I owned. Rana Bokhari did the same thing," Selinger said in an interview.

"We think it's incumbent upon Brian Pallister and the Conservatives to come to the table and be transparent about what they're all about."

But Pallister argued that making his tax information public is more about politics, not transparency.

"Yesterday the premier made it about his income. I want to make it really clear: It's not his income to me. It's about what Manitobans make," he said. 5 years agoVideo
9:09
NDP Leader Greg Selinger sits down for a one-on-one interview with Information Radio guest host Ismaila Alfa, with just over a week to go before election day on April 19. 9:09

Manitobans will go to the polls on April 19. Selinger and his New Democrats are hoping to win an unprecedented fifth term in government.

Selinger, who is seeking re-election in Winnipeg's St. Boniface constituency, acknowledged in an early campaign ad that "we haven't always gotten it right."

When asked about what was done wrong, Selinger said the government "caught Manitobans by surprise on the decision to go ahead with an additional one cent on the dollar for the PST, and we acknowledge that, and I acknowledge that and took responsibility for it.

"We listened to Manitobans and they said, 'If you're going to raise revenues, match it with things that make a difference,'" Selinger added, citing infrastructure as a key example.

Selinger was the second of Manitoba's political leaders to appear on CBC's Information Radio for one-on-one interviews in the final days leading up to election day.

Green Party Leader James Beddome was interviewed on Friday, while Pallister will be on the program later this week. Bokhari has declined CBC's request for an interview.

You can watch all four party leaders face off in a televised debate on Tuesday starting at 6 p.m. CT during CBC Winnipeg News.