The government's draft plan for Phase 4 of reopening had proposed increasing indoor and outdoor gathering sizes, and relaxing the 14-day self-isolation requirement for travellers from eastern and southern Ontario, Quebec and Atlantic Canada.

The province of Manitoba is postponing some of its plans to ease restrictions put in place to slow the spread of COVID-19, in response to feedback to its proposals.

The government's draft plan for Phase 4 of reopening, which was released earlier this week, had proposed relaxing the 14-day self-isolation requirement for travellers from eastern and southern Ontario, Quebec and Atlantic Canada.

"From all that we collected and gleaned from Manitobans … the number one area in which they expressed concerns was the reopening, the lifting of restrictions for travel from outside Manitoba," Friesen said at a news conference Thursday afternoon.

The self-isolation requirement was lifted last month for visitors from northwestern Ontario, provinces west of Manitoba and the territories.

The province also proposed increasing maximum sizes for public gatherings, but that is also on hold for now.

Some other Phase 4 changes will come into effect this Saturday, Friesen said.

That includes allowing movie theatres to reopen and stage performances to resume. Theatres will be allowed up to 30 per cent of their normal capacity or 500 people, whichever is lower. The same limits will apply for faith-based gatherings as of Saturday.

Those size limits are scaled down from the draft plan, which proposed capping attendance at 50 per cent of venue capacity.

Casinos will also be allowed up to 30 per cent of normal capacity.

Proposed changes to visits at long-term and personal care homes will also move forward as of this weekend. 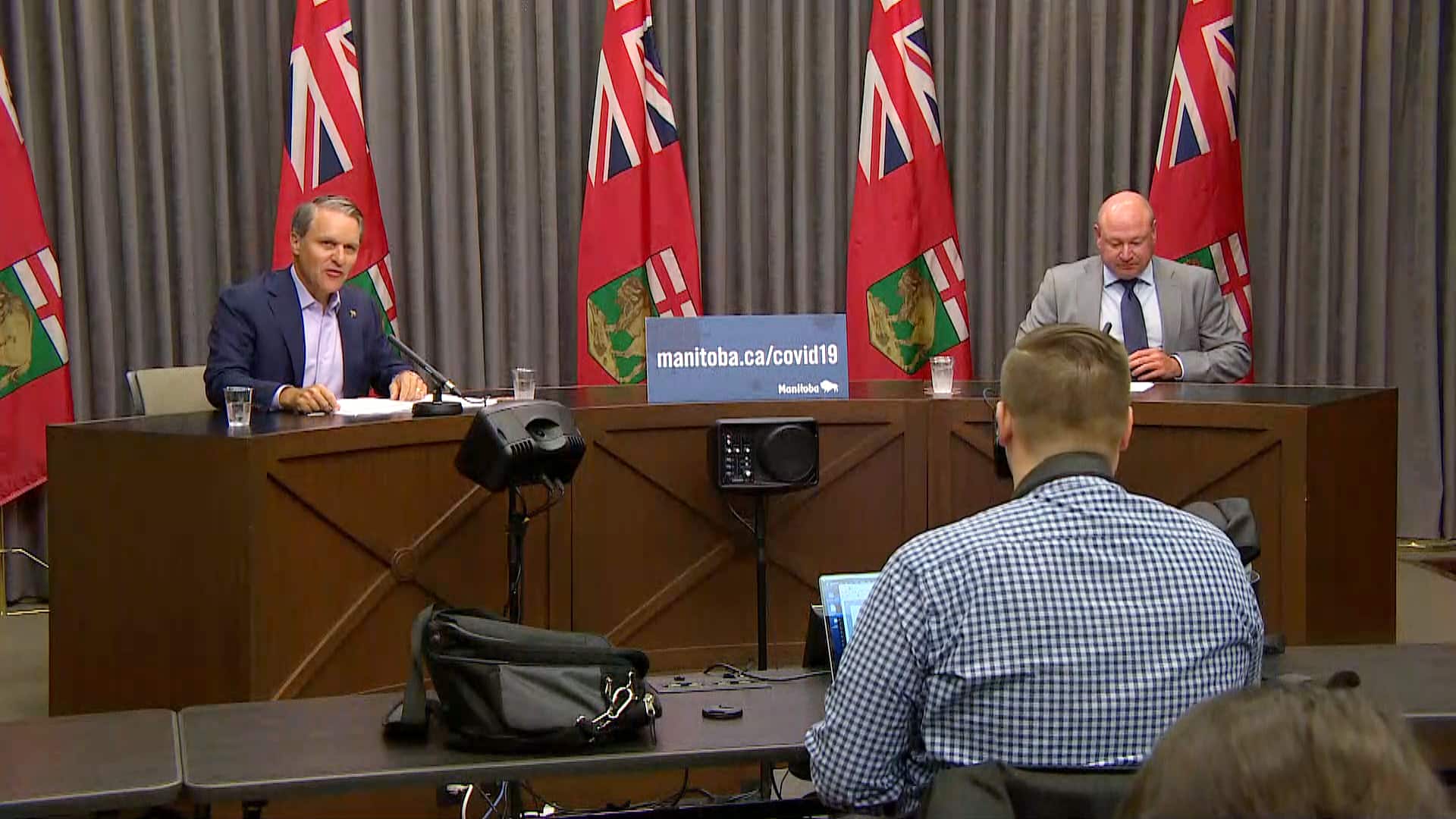 Each resident or designate at personal care and long-term care facilities will be able to identify two support people who can visit with residents in their own rooms.

However, maximum gathering sizes will remain at the Phase 3 limits, which are generally 50 people indoors and 100 outdoors.

Although the province has backed off some of its immediate plans to loosen restrictions, Manitoba's chief public health officer said people will need to learn to live with the virus while maintaining practices like handwashing, mask wearing and physical distancing to protect vulnerable people and reduce strain on the health-care system.

The proposed changes in the draft plan were drawn up weeks ago, when Manitoba's case numbers were exceptionally low, including a nearly two-week stretch with no new cases, said Friesen.

That changed on July 14, when five new cases were announced. Another 45 have been announced since then.

"What really surprised a lot of people was the sudden re-emergence of cases in Manitoba. Clearly where we are today is so different from where we were just two weeks ago," Friesen said Thursday.

Roussin also announced at the news conference that one new case of COVID-19 has been identified in the province.

The new case is a man in his 40s from the Interlake-Eastern Health region.

The current five-day test positivity rate — a rolling average of the percentage of completed tests that came back as positive — is 0.91 per cent.

The revised positivity rates are:

One person is currently in intensive care with COVID-19.

Thursday's new case brings the province's total since the start of the pandemic to 375, with 49 cases now active, 319 recoveries and seven COVID-19-related deaths.

Over the last several days, the province has identified a number of infection clusters in Hutterite colonies around Manitoba. Going forward, Roussin said the province will only refer to clusters generically, without identifying details.

A minister for one of the colonies wrote a letter to Friesen and Premier Brian Pallister on Wednesday, saying members of the Hutterite communities face stigma due to the outbreaks and asking the province to only refer to geographic location, rather than specifying colonies, when identifying new cases. 3 months ago
2:15
The province of Manitoba is postponing some of its plans to ease restrictions put in place to slow the spread of COVID-19, in response to feedback to its proposals. 2:15

With files from Caitlyn Gowriluk