There are 51 new confirmed cases of COVID-19 in Manitoba on Monday, as public health officials announce new restrictions on Winnipeg and area bars and restaurants and the province promises to expand testing sites.

"We know that this infection can be significant and serious outcomes occur most commonly in those at the over age 65 or with underlying health conditions, but we do see that this can affect all ages," he said.

Starting Oct. 7, restaurants and bars in the Winnipeg area under the orange pandemic response level will have to stop serving alcohol between 10 p.m. and 9 a.m. 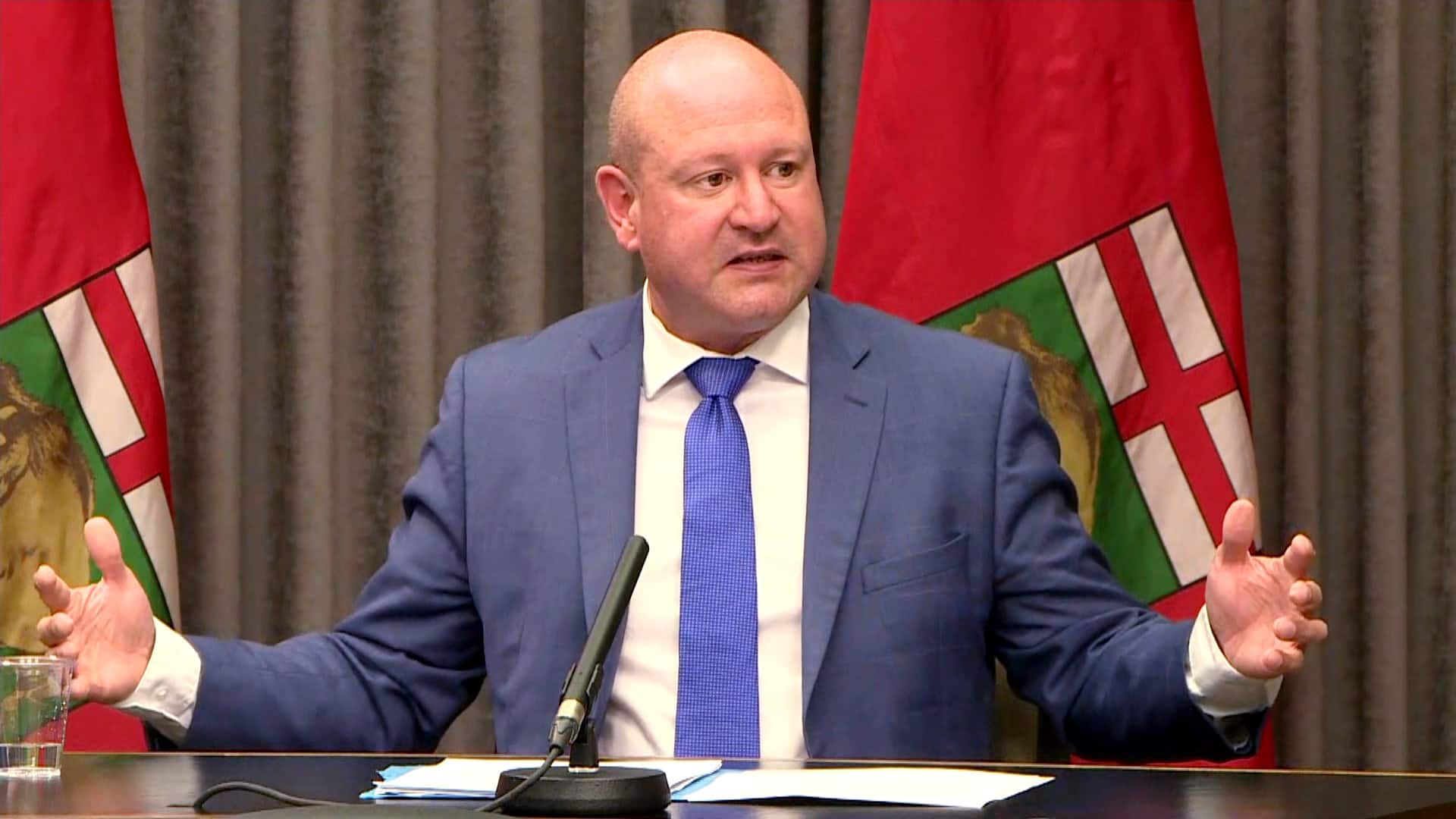 16 days ago
0:44
Chief Public Health Officer Dr. Brent Roussin said Monday current patients in Manitoba hospitals range in age from 17 to 88, and there are people in the intensive care unit in their 20s, 30s and 40s. 0:44

"It's certainly a challenge for the sector, but I think most people wanted to be part of the solution," Roussin said.

Those businesses must now make sure all patrons leave by 11 p.m. Restaurants must close dine-in services between 11 p.m. and 6 a.m. but may continue to provide delivery or takeout.

The size of a group at a restaurant can't exceed 10 people, and groups must be seated at least two metres apart, or have a non-permeable barrier between them.

Businesses must keep contact information for all patrons for up to 21 days, after which that information must be destroyed. The province is also working on guidelines for noise levels in bars and restaurants, due to the added risk of transmission from speaking loudly.

Health Minister Cameron Friesen promised to significantly expand testing capacity in the province, including doubling the number of testing sites in Winnipeg in the coming weeks, in an effort to reduce congestion and wait times.

The province has also launched a study to find out what are the main issues causing the delays at testing sites and come up with possible solutions.

"We're looking to solve these issues, and that means using creativity and availing ourselves of all the resources that are available to us," Friesen said.

"Obviously we'll see a lot of fluctuation with that over time, but we still haven't seen certainly not an exponential growth in the Winnipeg region. We're seeing fairly flattened numbers," he said.

Manitoba's death toll from the pandemic rose on the weekend, with new deaths reported on each of the previous three days, bringing the total to 23.

One of those deaths, which was announced on Sunday, was a man in his 50s who was resident of Heritage Lodge in Winnipeg. Roussin said the man had multiple underlying health conditions.

There are now 11 cases confirmed at the personal care home among residents and staff.

The number of cases at Parkview Place personal care home has increased to 24, including four staff and 20 residents. Meanwhile, health officials removed a previously reported case from the official total at Bethesda Place in Steinbach, bringing the total to 18, including 10 staff and eight residents.

Friesen said the province is working on delivering visitation pods to personal care homes around the province. Some have already arrived and are in the process of being brought into service, he said.

There were more possible exposures to COVID-19 at IQRA School in Winnipeg on Sept. 22, 23, 25 and 28, although there is no evidence of in-school transmission, health officials said.

Other possible exposures happened at Stonewall Collegiate in Stonewall, Man., on Sept. 28 and 29, and at Collège Louis-Riel in Winnipeg on Sept. 28.

The number of confirmed cases tied to John Pritchard School in Winnipeg has risen to 38, with 10 cases outside the school, Roussin said.

Manitoba now has 739 active cases of COVID-19 and 1,429 individuals have recovered. The total number of confirmed cases in Manitoba is now 2,191.

Over the weekend, Little Grand Rapids First Nation moved to the red, or critical, level under the province's pandemic response system, the highest level on the scale, after 19 people tested positive for the virus. Officials said they expect more cases to be confirmed in the coming days.

The outbreak has been linked to gatherings at a recreation centre in the community from Sept. 24 to 27. Anyone who attended events at the recreation centre on those dates is asked to contact public health officials.

Manitoba's newest COVID-19 surveillance report says there were 295 new cases of the coronavirus identified in the week of Sept. 20-26, the highest in a weekly report to date.

The previous record for weekly cases in a provincial surveillance report was from Aug. 16 to 22, when there were 272 new cases.

The report doesn't include information from last week, which could show higher case counts. The province's weekly reports are always a week behind, and the numbers may not match daily reported numbers, as the province regularly adjusts the data as new information arrives.

The majority of the new cases in the last full week of September — 80 per cent — were in the Winnipeg Health region. 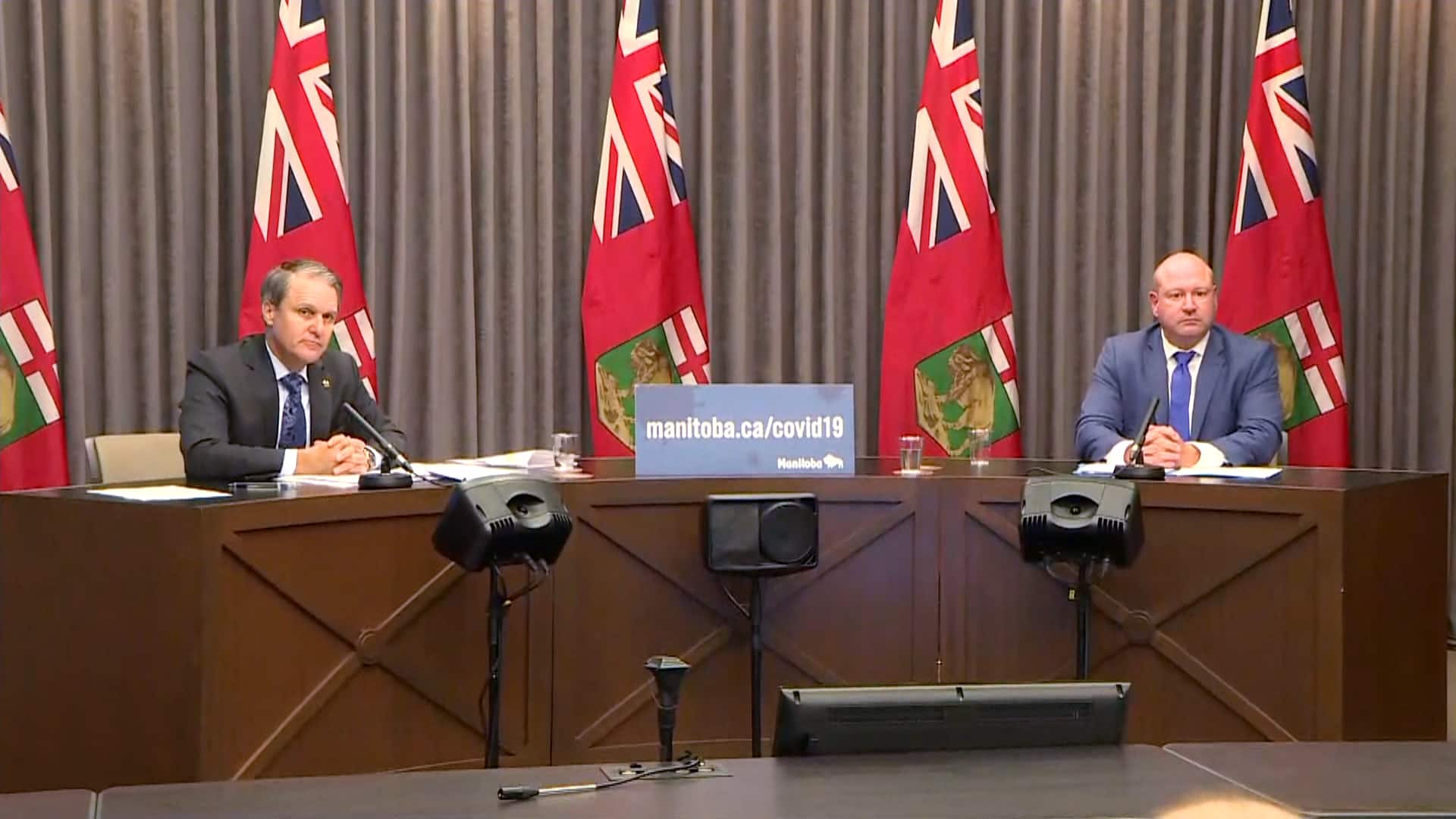