More than half of the cases — 25 — are in the Prairie Mountain Health region, said Dr. Brent Roussin, Manitoba's chief public health officer, at a news conference. That region includes the city of Brandon.

Signs of community spread in Winnipeg, Brandon, as some have lost sight of 'fundamentals': Dr. Brent Roussin

Some Manitobans are starting to lose track of "fundamentals" in the fight against COVID-19, the province's chief public health officer said Friday, as he announced 40 new cases across the province and warned there are signs of community spread in Manitoba's largest cities.

There are "early indications" of community transmission in both Brandon and Winnipeg, Dr. Brent Roussin said Friday, although most of the province's current cases are still believed to be linked to travel or close contact with known cases.

Friday's 40-case tally matches the previous record for the highest number of cases announced in a single day since the pandemic began.

The last time Roussin announced 40 cases at once was on April 2. At that time, the province had fewer than 200 active cases.

As of Friday, Manitoba has 246 active cases, Roussin said — also a record.

More than half of the latest group of cases — 25 — are in the Prairie Mountain Health region. That region includes the city of Brandon, which currently has 90 active cases — up from 80 on Thursday — according to new, more granular detail on the provincial COVID-19 dashboard.

The average number of close contacts for each case — meaning the number of people identified by public health as having been in prolonged, close contact with someone who has tested positive for COVID-19 — is also trending upward, Roussin said.

In Winnipeg, the average number of close contacts for a case has increased recently from three to four, he said, and there is at least one recent case whose close-contact list numbered 25.

"It's some evidence that we've lost some sight of our fundamentals," Roussin said Friday.

"We've gone through a challenging time everywhere, and [are] having a beautiful summer, and people are really feeling the need to get out and about.… These cases should be a reminder that this virus is still here, that we're not done with this."

He urged Manitobans not to lose sight of public health precautions like hand hygiene, physical distancing and staying home when sick. He also encouraged people to wear masks whenever they're unsure if they can physically distance from others.

Early investigations suggest most of the Prairie Mountain cases are linked to previously announced cases in Brandon, Roussin said, but there are some signs of community transmission there, and in Winnipeg.

Currently, 31 cases in the province from the past seven days are classified as "non-epi linked," or community spread, Roussin said. That's likely an overestimation, he added, because some of them may later be connected to known transmission chains.

The new cases bring the total number of confirmed and probable COVID-19 cases to 643. A total of 389 people have recovered and eight Manitobans have died.

Despite the jump in cases, Roussin said he still has no plans to reintroduce sweeping public health restrictions from earlier in the pandemic. That could change if the COVID-19 situation worsens.

"We're going to see periods of peaks and valleys. But we need to be able to find ways to deal with that without massive shutdowns every time we start seeing cases again," he said.

"This is certainly a peak."

The province is also warning the public of three occasions where people may have been exposed to COVID-19. The first was at a Brandon Sobey's at 1570 18th St., on Aug. 7.

Another potential exposure happened on Aug. 10 at the Minnedosa Hospital at 334 First St., and a third was on Aug. 9 at the Cartwright Town and Country Golf Club on Highway 3, just west of Cartwright.

There are 39 cases linked to a business in Brandon, Roussin said. Previous reporting has identified the business as the Maple Leaf Foods pork processing facility.

Later on Friday, the company updated the tally of positive cases at its Brandon plant to 42.

The province still has no evidence indicating there's transmission of the virus within that workplace, Roussin said. Brandon is currently the site of a large cluster of cases that numbered in the "high 60s" on Thursday, Roussin said, and some of those people "happen to work" at the plant, he said.

However, the increasing number of cases at the plant "requires us to pay as close attention as we can to that," he said.

Nine people are currently in hospital for COVID-19, including three in intensive care.

A record-high 2,288 tests were completed Thursday, bringing the province's total to 110,492 since early February. The five-day test positivity rate is 1.25 per cent, up from 1.19 per cent on Thursday.

Leaders of Manitoba's opposition parties are calling the province to take a stronger stance than reminding Manitobans to follow public health precautions.

"Dr. Roussin has said that we have let go of the fundamentals, but is not mandating any further restriction," said Manitoba Liberal Leader Dougald Lamont.

"When the health and lives of Manitobans are at stake, admitting failure without a course correction is completely unacceptable."

"We're seeing already that this recent cluster in Brandon has really increased the demand for tests, but that's only going to increase this fall when students are back in the classroom." 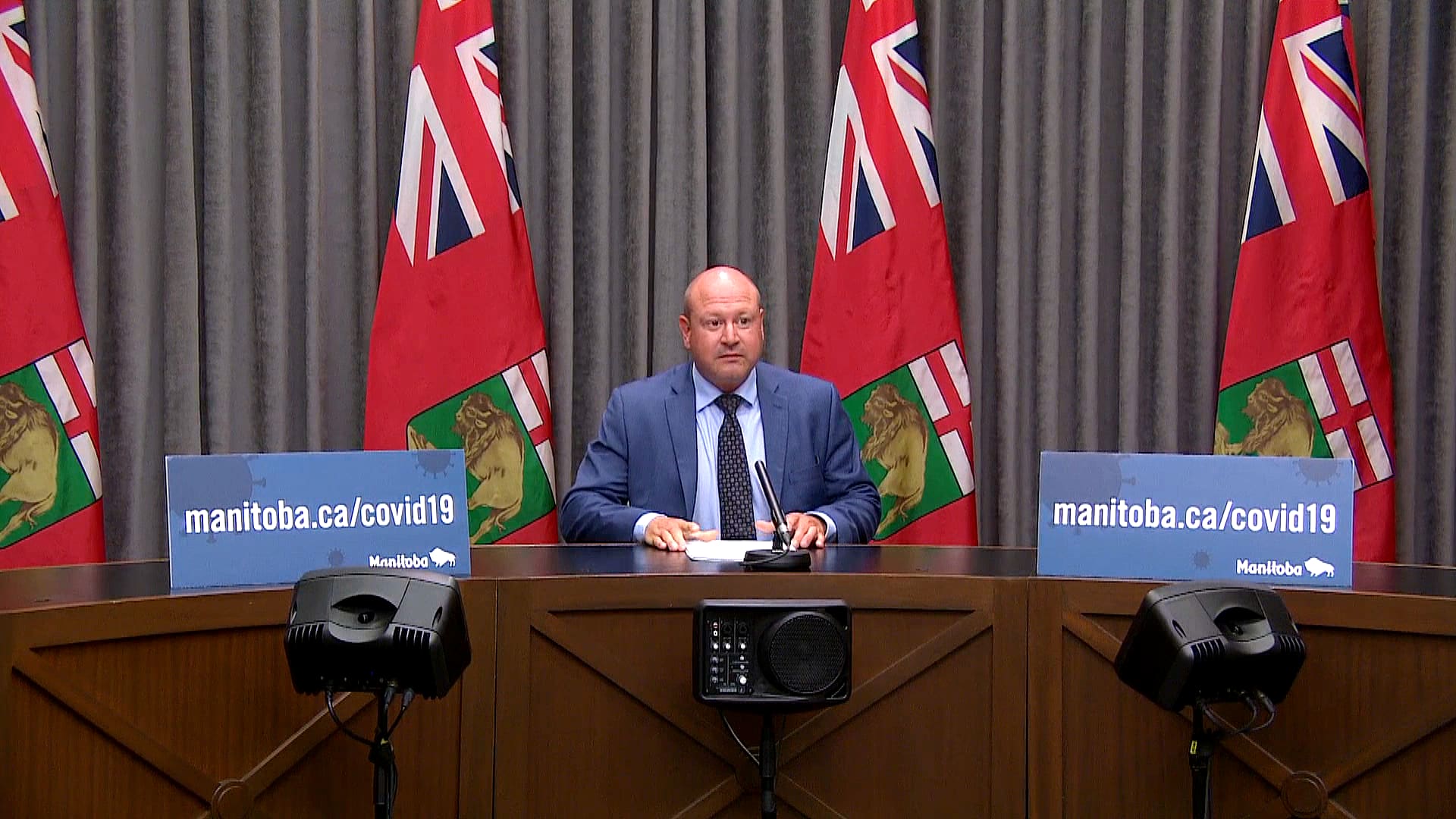